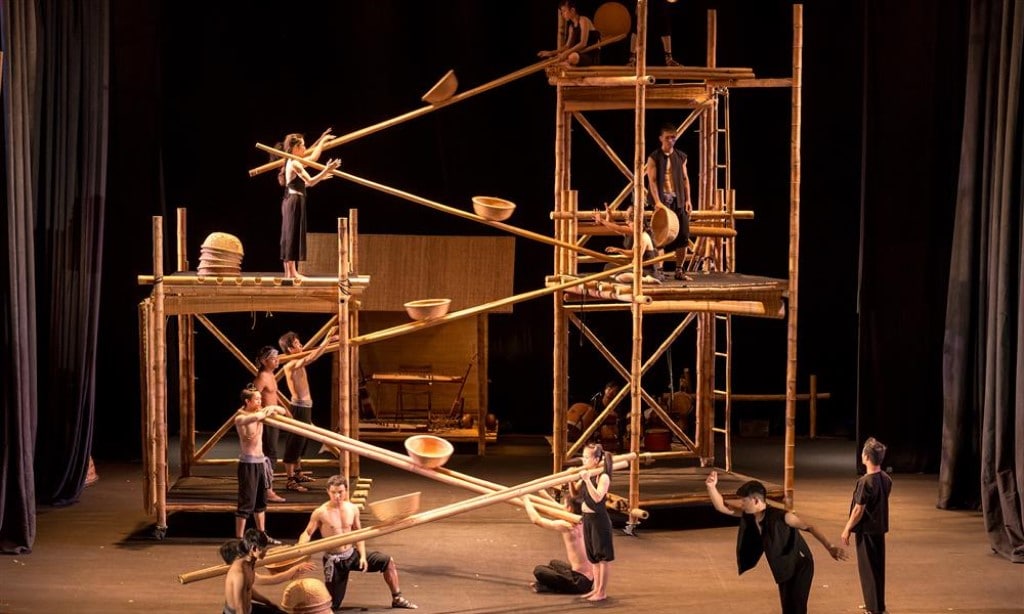 A celebration of cultural heritage never hurt anybody

On a normal day in Vietnam, it would be a natural occurrence to respectively hear the words ‘bamboo’ and ‘circus’ at a pretty frequent rate. The two terms are big staples in Vietnam’s cultural and historical standing. Now, what would happen if we take these two elements and roll them together in an inspiring performance-slash-celebration of tradition, growth and beauty? The Vietnamese Bamboo Circus does just that in an epic production of cultural significance and the simple pleasures of Vietnamese daily experiences. Who said history couldn’t be fun?

The Vietnamese Bamboo Circus is not only a local event. They travel worldwide and have people of different ethnicities immerse themselves in the unique artistry of their homeland. They have performed over 500 acts in 17 countries altogether attracting 300,000 visitors and that number isn’t slowing down any time soon. No animals are involved. Just bamboos and movement— sounds simple but the allure is on another level.

Bamboo is the very essence of the spectacle, but on a deeper scale, it is also the root of the nation. It holds a special place in the hearts of the people. The material is utilized for many various ventures and purposes in everyday Vietnamese life. Cooking, building furniture, art, fishing, farming, literature and music— bamboo is essential to the existence of comfortable living in Vietnam. Though it fronts as a prop for the circus, it is so much more than that. It is not a single element of the show. The bamboo is the show. A symbolic sound of raw determination and passion that emanates through the stage.

The Nature of the Performance: A Global Extravaganza

The circus has traveled far and wide to share its love and appreciation for its cultural roots. The dedication is apparent not only in their perseverance to create art but also in their thorough creation process. They have two kinds of performances: the À Ố and the Teh Dar.

The À Ố show is their specialty— the first and classic bamboo circus show. It consists of acrobatic maneuvers, playful bamboo tricks and fun airborne movements bound to put twinkles in your eyes. The show recently made its way to Australia’s Sydney Opera House, debuting the first Vietnamese production it has ever had. It was a big deal for both parties. The Teh Dar show revolves around life in the rural, mountainous regions of Vietnam featuring simplistic beauty amidst struggle. The performance was inspired by the nation’s indigenous people and ancient tribes. Though both shows portray seemingly different core concepts, they are together embedded by a common tread. The culture of Vietnam’s beauty and spirit.

Tuan Le is the creative director of the Vietnamese Bamboo Circus. He created each production with a powerful mission in mind which is to display dream-like performances that allow viewers to momentarily forget their struggles and hardships. He wants his viewers to enter an illusion of fun and joy— even if it’s just for a little while. In an interview with Nhan Dan newspaper, he stated:

“Beyond entertainment, the Vietnamese Bamboo Circus is on a mission to touch the hearts of Vietnamese people living far from their homeland and inspire international audiences with the essence of Vietnam’s cultural richness and beauty.”

The Vietnamese Bamboo Circus specializes in the simple daily lives of Vietnamese people, magnifying its hidden intensity and resilience. It is a beacon of tangible emotion. It does not merely display activities as they are— it shines a light on the soul beneath each movement and sleight of hand. It is a touching experience regardless of the viewer’s background and ethnicity. With the symbolic almost soundlessness of each bamboo whip and crack, there comes a loud understanding of depth in a way that has never been felt before.

Make sure to purchase tickets at least 24 hours before your desired performance. Prices are 30% off for children between the ages of five and twelve. Children under five are prohibited.