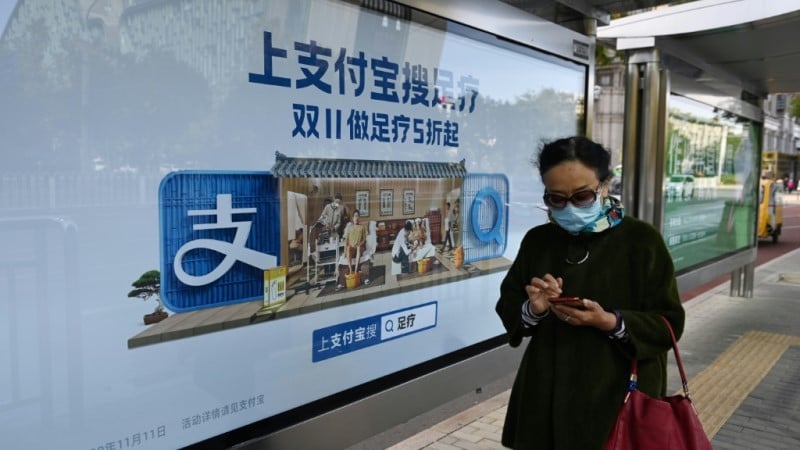 For hundreds of millions of Chinese consumers, Ant Group’s Alipay app is essential to everyday life

As Tao and a friend strolled the city at the weekend, he used Alipay to buy a cup of milk tea, a deep-fried octopus snack and a box of candy. He also used it to play a basketball game at an arcade, make a small donation to a street musician, and produce a health code signalling he was coronavirus-free before entering a Buddhist temple.

They topped the day off with bowls of Japanese ramen noodles, also purchased with a scan of an Alipay code.

Tao’s day underscores why the planned $34 billion stock listing of Ant Group, the financial arm of Chinese e-commerce giant Alibaba, is such a big deal. 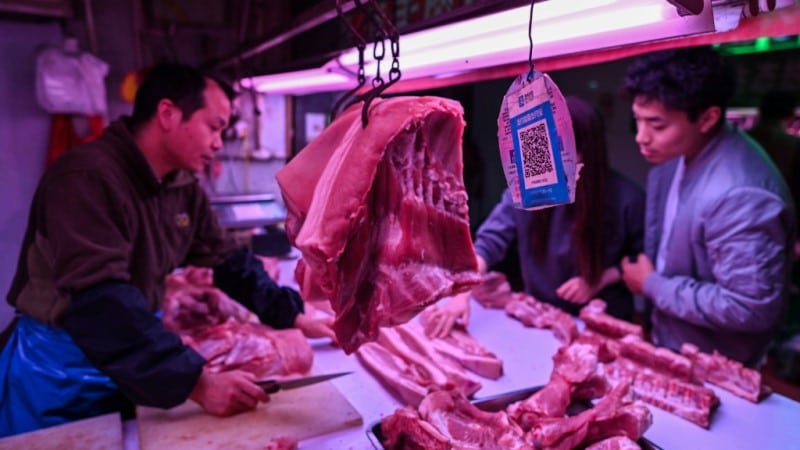 All kinds of transactions, from paying bills to buying meat and produce, are conducting by scanning an Alipay QR code

Like hundreds of millions of Chinese consumers, the 22-year-old admits he simply cannot survive without Alipay, the crown jewel of the Alibaba empire.

“I use Alipay to order a cab, to buy things, to shop on (Alibaba e-commerce platform) Taobao, to buy clothes, and air and train tickets,” said Tao.

“It’s indispensable for getting around in China.” 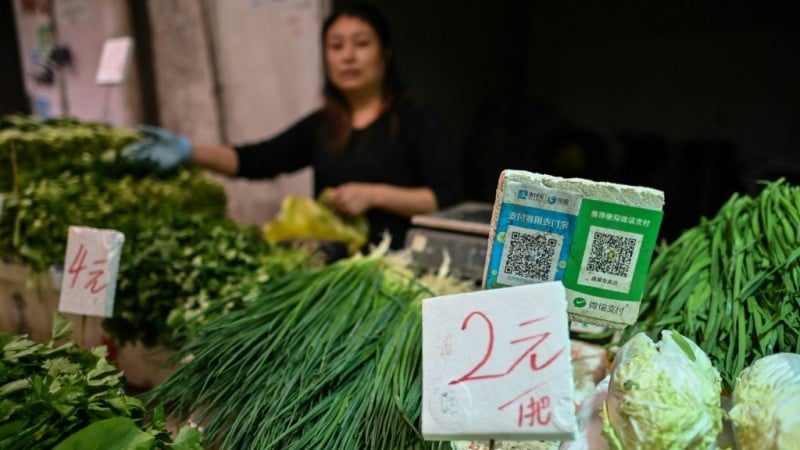 Economy of the Future

The raw numbers and growth potential of Ant Group have investors salivating over the world-record IPO.

Alipay boasts in excess of 700 million active users — half of China’s population and more than double that of the United States. Along with the WeChat Wallet function of Alibaba’s chief tech rival Tencent, it has helped propel China forward into what may represent the economy of the future.

At restaurants, grocery stores and cafes, at subway turnstiles, train stations and airports, and when buying fruits and vegetables from a streetside peddler, purchases across China are routinely made by consumers old and young with a quick QR code scan.

Even the occasional beggar is on board, sprawled on a sidewalk next to a neatly laminated printout of a QR code.

Tao said that in China’s paper-money olden days, his family would have to hail a cab to get to a distant government office just to pay the household water and electricity bills — in cash.

“Now, we pay all our utility bills through Alipay, which directly deducts the amount online,” he said.

But direct point-of-sale payments are only part of the Alipay picture.

Ant Group has built an ecosystem around Alipay in which third-party vendors — for everything from meal deliveries to travel services or taking out a loan — are housed under its umbrella.

Smartphone users need only open Alipay to find the service they want and place an order.

Payment, of course, is processed via Alipay.

Ant Group, spun off from Alibaba in 2011, says about half its revenue is derived from such providers.

But its super-sized ambitions also include forays into personal finance that have put traditional Chinese banks on notice by offering easy access to a range of financial services including consumer credit, small-business loans and money-market funds.

“We are going to see digital finance do things we never thought it could do, and go into businesses everywhere that we never saw coming.”

The Chinese consumer buy-in is so complete that many merchants today only grudgingly accept cash.

They have long fretted that despite decades of amazing growth, China’s economy was built on a shaky foundation relying too much on manufacturing and government investment, like a chair missing a leg.

The party wanted to unleash China’s growing consumer spending power as another pillar, and the e-commerce revolution ushered in by the likes of Alibaba and Tencent has helped pave the way.

Ant Group’s attraction to investors, Towson says, is that the consumers and businesses captured in its embrace will only grow and potential rivals may find Alipay’s success “impossible to replicate”.

But Alipay’s growing profile in Chinese daily life has led to some concerns.

Ant was forced to apologize in 2018 after users said they felt misled into allowing Alipay to share data on their spending habits with Ant’s credit-scoring arm and other third-party services.

And “Big Brother” fears surround an ill-defined “social credit” system being rolled out in China and facilitated by Alipay in which data on undesirable behavior is captured digitally and compiled in a “credit score” that could affect a person’s access to jobs or various services.

But Tao’s main complaint is that Alipay has become too central to his life. He has been stranded at times when his phone died and his pockets were otherwise empty.

“I won’t completely rely on Alipay,” he said.

“I’ll still bring some cash with me for those special situations.”

With a name belying its giant ambitions, China’s Ant Group on Tuesday launched a history-making $34 billion IPO in Hong Kong and Shanghai.

Backed by Jack Ma, China’s richest man who founded the Alibaba e-commerce empire from his bedroom two decades ago, Ant is a financial technology titan that is stitched into the everyday life of hundreds of millions of Chinese people.

But outside China it is less well known. So what is Ant?

Ant Group is the parent company of Alipay, China’s pioneering digital payments firm, which was founded by Ma in 2004.

A former teacher, Ma started in digital sales with the Alibaba e-commerce giant but his ambitions then turned to the potential for simplifying personal finance in China.

He envisioned a cashless society based on “trust and credit” where buyers’ cash is held in escrow by Alipay for merchants to send their goods with a guarantee of return for any unhappy customers.

In interviews Ma likes to recount how the start of Alipay was met with derision, saying: “Everybody said ‘Jack this is the most stupid model we’ve ever seen, nobody will use it.'”

It now claims one billion users, in part thanks to Ma’s gift for navigating China’s red tape and gatekeepers.

From payments for food deliveries, instant loans to micro-investment and insurance, Ant has mushroomed into an integral part of everyday Chinese life.

The corporate spiel says the Ant name derives from the company mantra of empowering ordinary consumers: “We believe small is beautiful, small is powerful.”

It is the world-largest digital payments platform, claiming 731 million monthly users on the Alipay app using more than 80 million stores.

That equated to $17.6 trillion in payments as of June this year, 25 times more than US giant Paypal.

The company is leading the line on blockchain technology and says it has a capacity to match one billion transactions a day on the so-called AntChain.

Its financial products have revolutionised personal finance across a vast country where around 10 percent of the population remains unbanked.

The Alipay app launched in 2013 a “Yu’eBao” service, which allows ordinary people to play money markets from their e-wallet.

The “leftover treasure” concept gave entry to investments of as little as one yuan, briefly becoming the world’s biggest fund with nearly $200 billion in circulation.

Meanwhile, Zhima Credit (or Sesame Credit) is its credit scoring system, and Bangnitou — an artificial intelligence powered investment adviser — hoovered up 200,000 customers within six months of its launch.

Armed with the data of hundreds of millions of people, boundary-pushing AI and pockets soon to be stuffed with IPO cash, Ant says it intends to keep innovating and rolling into new markets.

Abroad, the vast, young tech-friendly populations of Southeast Asia and India are seen as fertile ground for its products.

But there are challenges ahead. Tencent’s WeChat, the second player in China’s digital payments market, is gobbling up market share.

Meanwhile, global trust in Chinese technology has taken a hit with fears of data harvesting on behalf of China’s ruling Communist Party. That could forestall Ant’s march.

But seemingly not that of Jack Ma. China’s richest man stands to make around $27.8 billion from his 8.8 percent stake in Ant if the share sale goes to plan.

by Dan Martin and Jessica Yang