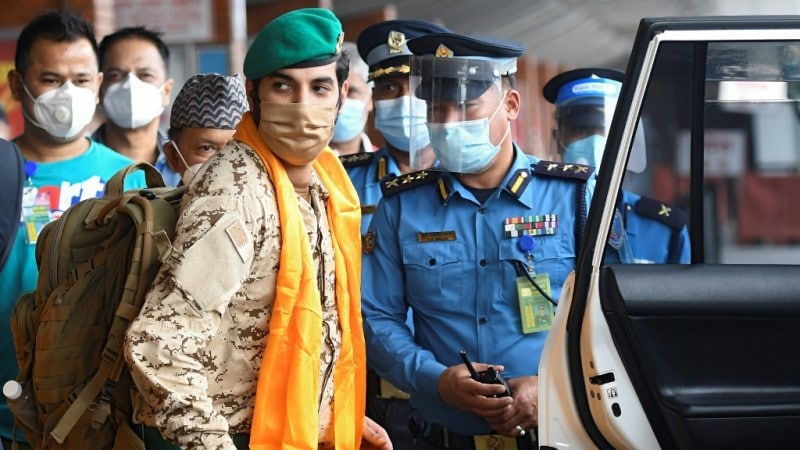 Members of the Bahrain team arriving in Nepal

A mountaineering team including a Bahraini prince arrived in Nepal Wednesday, expedition organisers said, after officials made an exception to a coronavirus ban on foreign arrivals.

Nepal closed its borders in March and grounded international flights just ahead of the busy spring climbing season, devastating the local tourism sector.

The ban on foreign tourists is in place until October.

Mingma Sherpa, of Seven Summit Treks, told AFP the team — including three Britons — would quarantine in a Kathmandu hotel for a week before flying via helicopter to the climbing base camp.

More than 50 Sherpas will take part in the expedition, he added.

The identity of the royal climber was not disclosed.

The Bahrain Royal Guard team is next year planning to climb Mount Everest.

The only other team with a permit for the autumn season is an all-Nepali expedition planning to summit 7129-meter Baruntse.

Nepal re-opened its mountains — including Everest — in late July ahead of the autumn climbing season and in anticipation of international flights resuming in mid-August.

But a jump in virus infections in recent weeks saw the government delay allowing flights.

Limited international flights resumed this month, but only for citizens and foreign diplomats.

The country of 28 million people has recorded an average of 1,000 daily infections since August, for a total of more than 58,000 cases and 379 deaths.