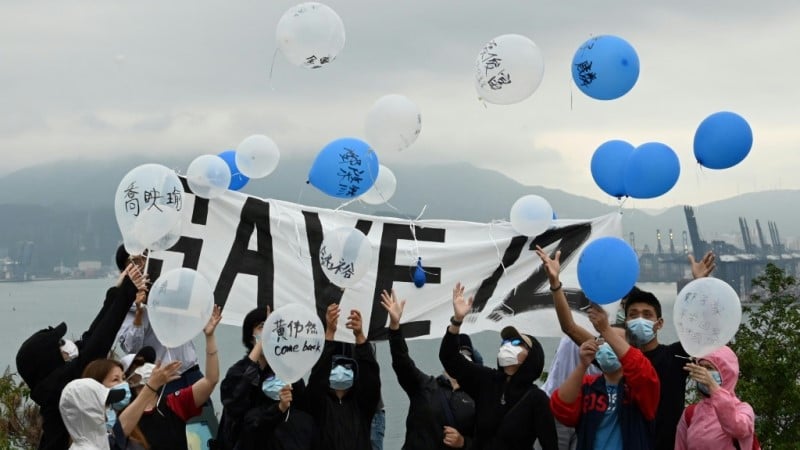 Relatives of 12 Hong Kong democracy activists detained in mainland China released balloons carrying messages to their loved ones across the border on Saturday, as they called for their return.

It has been 90 days since the 12 were arrested by the Chinese coast guard in late August when fleeing their city for Taiwan by boat.

Most of those aboard the vessel were being prosecuted in Hong Kong for crimes linked to last year’s huge and often violent pro-democracy protests.

They have since disappeared into the mainland’s notoriously opaque, party-controlled legal system on immigration charges.

Family members climbed a small hill on the outlying island of Kat O, in northeastern Hong Kong just across the harbour from Yantian in Shenzhen, where the 12 Hong Kongers are being held.

“After I come up here, I feel I’m closer to him,” Wong Wai-yin’s mother told AFP, overlooking Yantian from the hilltop.

“It’s almost within reach, but it’s still out of reach.”

The relatives and some supporters held up a banner reading “SAVE 12”, and released balloons with the names of and messages to their loved ones.

“Miss you so much. Come home soon,” one balloon read.

Some of the relatives recently received handwritten letters from their loved ones for the first time since their arrest.

The letters were passed by lawyers appointed by the Chinese government after family-appointed counsel were denied access to the detainees, a common move by authorities in sensitive or political cases.

“There was no news about them at all before. So when I received his letter, my wife and I cried bitterly,” said the father of Cheng Tsz-ho, who was also at the hilltop, adding that they finally knew their son was still alive.

“No matter what they have been accused of, deep down in their hearts, they really love Hong Kong. I hope mainland China can return them to Hong Kong as soon as possible.”

In a statement, family members said the letters warning relatives against speaking to the media and seemed to adhere to a template and were probably written under duress.

They continued to call for their lawyers’ access to the clients, and the immediate safe return of the 12.