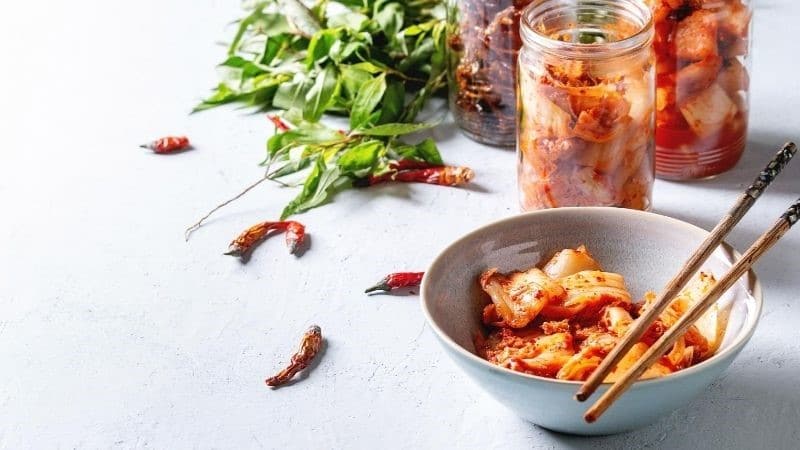 Kimchi is not a stranger to Asian meals. What started as a must-have for Korean dishes slowly crept into the plates of people all over the world thanks to the increasing popularity of K-culture. If you’re looking for more reasons to add kimchi to your diet, we’ve got the perfect one for you.

The Journal of Clinical and Translational Allergy recently published a study which suggests that fermented vegetables such as kimchi and sauerkraut can help decrease one’s chances of dying from COVID-19 related complications.

Dr. Jean Bousquet of Montpellier, a former World Health Organization expert, led a team of researchers to determine whether there is a link between the low mortality rates in European countries and their consumption of fermented vegetables. Although the study focused on fermented milk and sauerkraut, which are both common in Europe, it also suggested that people with diets that consist of fermented vegetables also report low mortality rates.

“Foods with potent antioxidant or anti-ACE activity—like uncooked or fermented cabbage—are largely consumed in low-death rate European countries, Korea and Taiwan, and might be considered in the low prevalence of deaths,” reported the study, which is available in MedRxivs.

Fermented foods reduce the enzyme ACE2 that enters the lungs. This makes it harder for the virus to penetrate the body. According to Dr. Bousquet “Coronavirus binds to ACE2 that induces oxidative stress, pro-inflammatory, and pro-fibrotic effects. Fermented foods have potent antioxidant activity and can protect against severe Covid-19.”

The expert also admitted that due to the promising result of the study, he has changed his diet to include raw cabbage consumed thrice a week, kefir during breakfast, sauerkraut once a week, and pickled vegetables.

South Korea only has a 2.14 percent fatality rate, based on its almost 300 deaths out of over 13,800 infected. Germany, which notably has a sauerkraut-heavy diet, also has a relatively low death rate at 4.47 percent, with over 9,000 deaths in more than 203,000 cases. These fatality rates show a big difference compared to other countries such as Italy (14.33 percent), France (14.05 percent), and the United Kingdom (15.30 percent), where fermented vegetables are not as commonly consumed.

Despite this promising finding, it’s important to note that this delicious side dish shouldn’t be treated as a miracle cure-all for the novel coronavirus. The Health Ministry of South Korea also confirmed this through a statement.

Kimchi Will Be Your Next Favorite Child Dish

This traditional Korean staple made with cabbage is salted and seasoned with ingredients such as spring onions, garlic, chili powder, and ginger before it is left to ferment. Kimchi is also a very versatile side dish and can be paired with stews, fried food, rice means, and soups. Although Kimchi won’t cure COVID, it’s wide array of benefits are still worth noting.

Healthwise, Kimchi is a joy to have. One of the allures of this dish is it can be made with tons of variations to cater to spicy and non-spicy food lovers. This Vitamin C-rich and low calorie fermented dish also contains tons of minerals, fiber, beta carotene, and phytochemicals. It also boasts probiotic properties that are very beneficial to one’s immune system and gut health.

Keen on Adding Kimchi to Your Diet?

In uncertain times where your health is at risk, it is best to always follow what medical professionals say; and if doctors encourage you to add more fermented food in your daily diet, you know what delicious and healthy foods to look for.

Thankfully, it’s very easy to find kimchi since it’s readily available in online suppliers and local Korean groceries. If you can’t purchase one, just make it yourself. This way, you’ll never run out of Kimchi in your home.