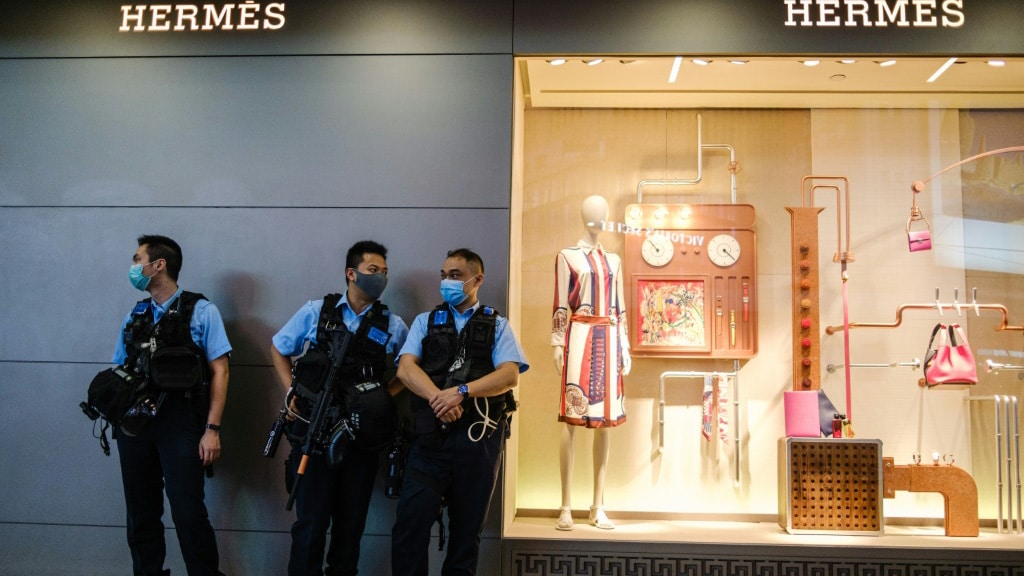 The announcement late Thursday was quickly decried by pro-democracy lawmakers and activists as “the end of Hong Kong”, with fears it will stoke unrest and tighten Beijing’s grip on the semi-autonomous city.

The proposal, planned for the first day of the National People’s Congress, would strengthen “enforcement mechanisms” in the financial hub, the parliament’s spokesman Zhang Yesui said.

China’s parliament considers it “necessary to improve and uphold the ‘One Country, Two Systems’ policy,” Zhang said, referring to the arrangement that has underpinned the city’s liberties and free market economy. 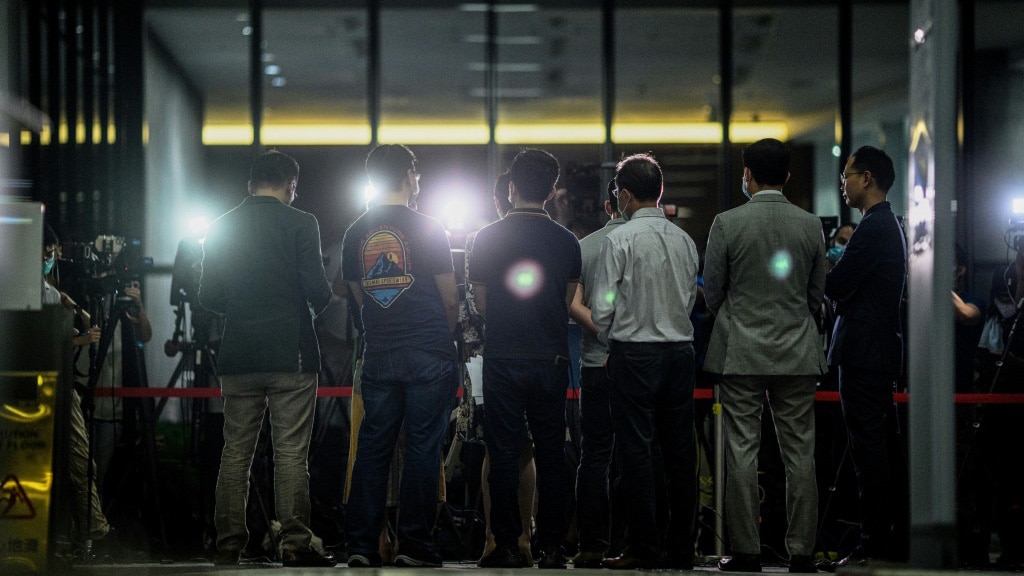 Pro-democracy lawmakers gather for a press conference in Hong Kong late on May 21, 2020, after China’s parliament said it will discuss a proposal for a national security law in the semi-autonomous city, a move likely to stoke unrest

Article 23 of Hong Kong’s mini-constitution, the Basic Law, says the city must enact such laws to prohibit “treason, secession, sedition (and) subversion” against the Chinese government.

But the clause has never been implemented due to deeply held public fears it would curtail Hong Kong’s cherished civil rights.

The city enjoys freedoms unseen on the Chinese mainland which are protected by an agreement made before former colonial power Britain handed the territory back to Beijing in 1997.

An attempt to enact Article 23 in 2003 was shelved after half a million people took to the streets in protest. 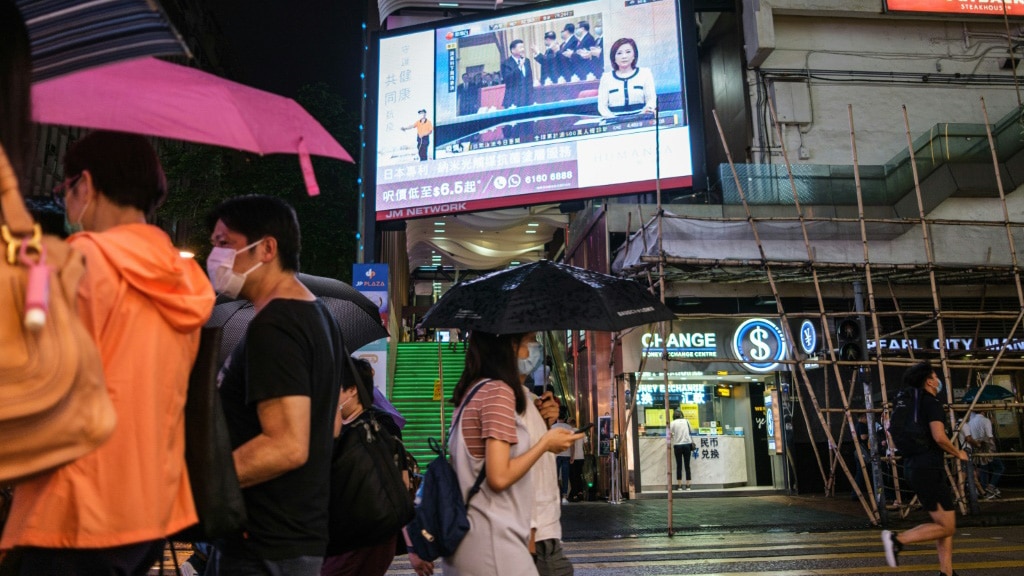 The controversial bill has been put back on the table in recent years in response to the rise of the Hong Kong’s pro-democracy movement.

Zhang did not provide more details about the proposed law.

But if it is introduced to the NPC it is likely to be approved, as the body rubber-stamps decisions already made by Communist Party policymakers.

US State Department spokeswoman Morgan Ortagus warned that imposing such a law on Hong Kong would be “highly destabilizing, and would be met with strong condemnation from the United States and the international community”.

“I don’t know what it is, because nobody knows yet. If it happens, we’ll address that issue very strongly,” Trump said.

Zhang Yesui, seen here on the screen during a video press conference in Beijing on May 21, 2020, said China’s parliament considered the move necessary

But pro-democracy lawmakers were furious.

“Many Hong Kongers must be as angry as us now, but we must remember not to give up,” she added.

Chris Patten, Hong Kong’s final British governor before the 1997 handover, said the proposal signalled a “comprehensive assault on the city’s autonomy” and would be “hugely damaging”.

Hong Kong has its own lawmaking body, the Legislative Council, or Legco.

But at least two Hong Kong deputies to the NPC have said they would propose the idea of introducing the law without going through city’s legislature, using a mechanism provided for under the Basic Law. 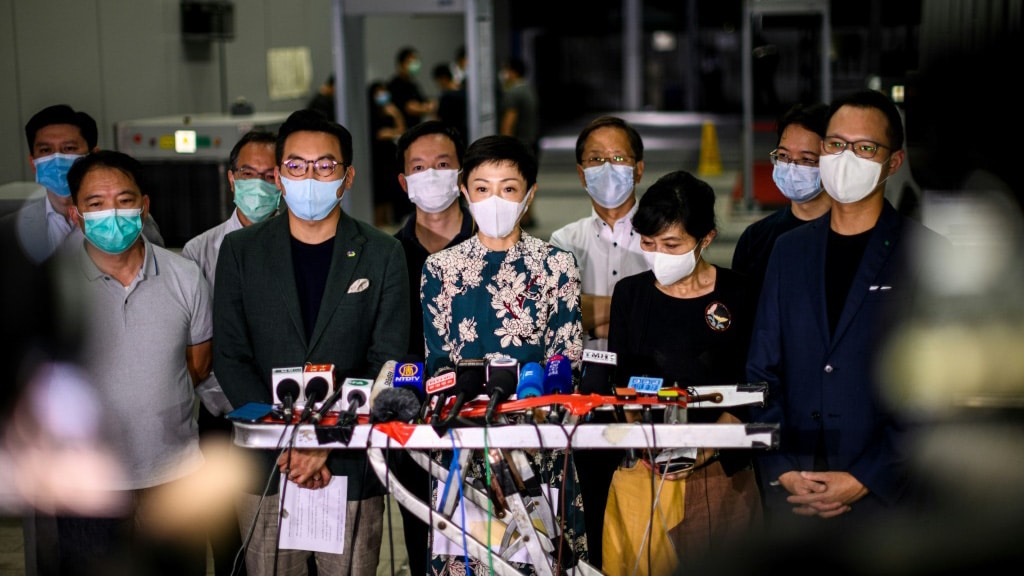 “First, Beijing does not believe that security law can make it through HK’s Legco, at least not without a major political storm, and second, protests and dissent has made the legislation of this law more urgent.”

“#HongKong has been the safe harbor for dissent; it’s the light, the conscience, the voice that speaks truth to an increasingly powerful China,” she tweeted.

The US Congress late last year angered China by passing a law that would strip Hong Kong’s preferential trading status if it is no longer considered autonomous from the mainland.

The State Department warned Thursday that China’s actions could impact its decision on that status.

US senators on Thursday also introduced legislation to impose sanctions on any entity involved in curbing Hong Kong’s autonomy.

That could include police cracking down on demonstrators and Chinese officials involved in Hong Kong policy — as well as banks that conduct transactions with anyone involved in curbing the territory’s freedoms.

Senator Pat Toomey, who spearheaded the legislation, described Hong Kong as “the canary in the coal mine for Asia”.

“Beijing’s growing interference could have a chilling effect on other nations struggling for freedom in China’s shadow,” he said.

by Jing Xuan Teng with Xinqi Su in Hong Kong