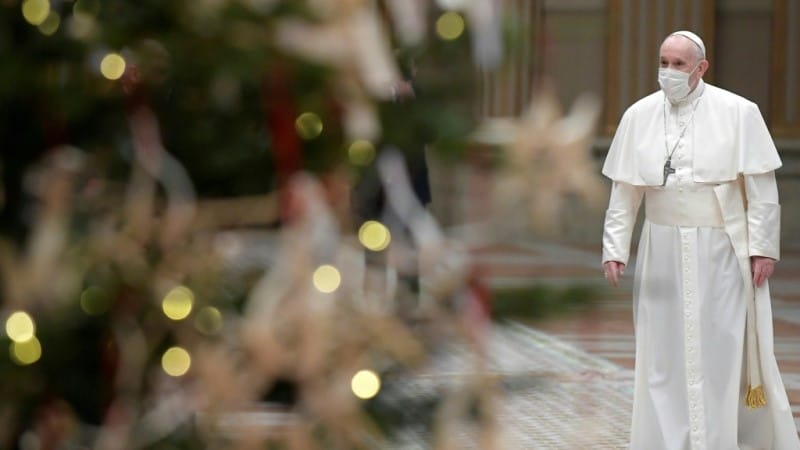 In his Christmas message, Pope Francis said that fraternity was a watchword for these unusually troubled times exacerbated by the pandemic

Hundreds of millions across the world celebrated pared-down Christmas festivities on Friday due to coronavirus restrictions, as Pope Francis called for vaccines for everyone, describing them as “glimmers of hope in this period of darkness and uncertainty”.

The pandemic has claimed more than 1.7 million lives and is still running rampant in much of the world, but the recent launching of mass vaccine campaigns has boosted hopes that 2021 could bring a respite.

Like so many across the globe, the pope was forced to break with normal Christmas tradition, holding his annual “Urbi et Orbi” speech by video from the apostolic palace, to prevent a crowd from gathering in St Peter’s Square.

“I call on everyone, on leaders of states, on businesses, on international organisations, to promote cooperation and not competition, to find a solution for everyone: vaccines for all, especially the most vulnerable and most in need in all regions of the planet,” he said.

In her own annual Christmas speech, Britain’s Queen Elizabeth II also spoke of hope during “difficult and unpredictable times”.

“Of course, for many, this time of year will be tinged with sadness: some mourning the loss of those dear to them, and others missing friends and family members distanced for safety, when all they’d really want for Christmas is a simple hug or a squeeze of the hand,” she said.

“If you are among them, you are not alone,” she added, saying she was proud of those in the UK and around the world who have “risen magnificently to the challenges of the year”. 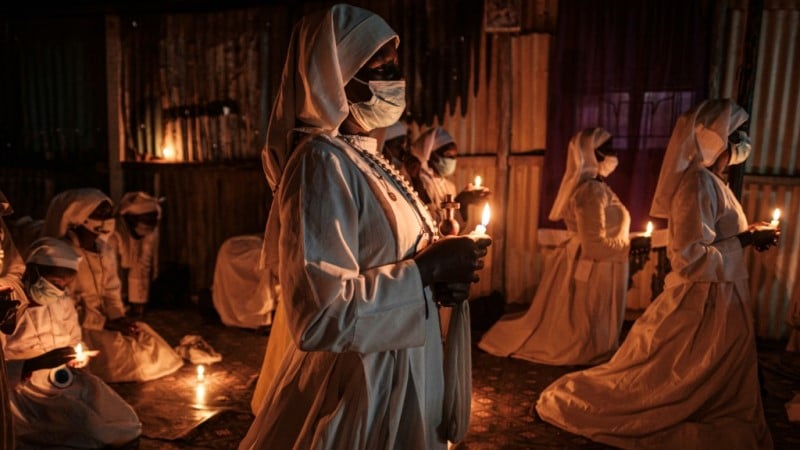 Britain has been through a particularly difficult time after the discovery of a new strain of coronavirus believed to spread much faster.

It had already been one of the hardest countries in Europe, which passed a total of 25 million confirmed cases on Friday.

Last week it became the first global region where more than 500,000 people have died of the virus.

A Way out of This Tragedy

World Health Organization chief Tedros Adhanom Ghebreyesus said in a video message that “vaccines are offering the world a way out of this tragedy” but one that will “take time”.

Tedros hailed the “heart-wrenching sacrifices” millions were making by staying away from loved ones on Christmas Day.

“We must not squander their sacrifices,” he said, calling for people to keep up infection control measures. 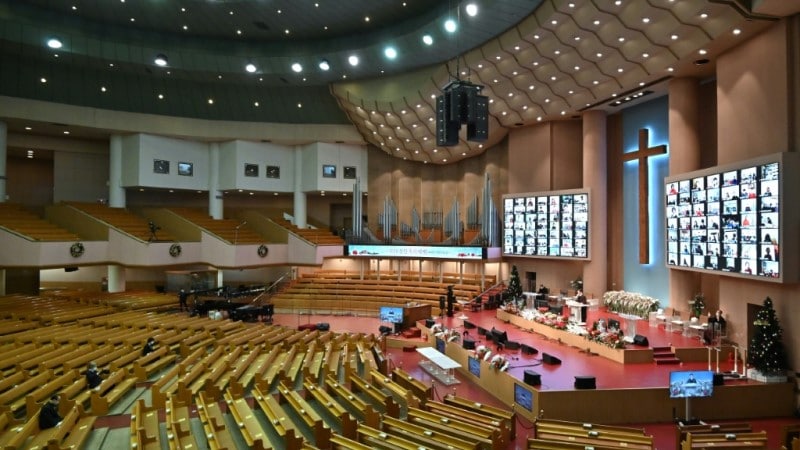 Worshippers followed a Christmas service online at the virtually empty Yoido Full Gospel Church in Seoul, which would normally expect 10,000 to attend

“It really is heartbreaking to see,” said Park Jae-woo, a member of the Yoido Full Gospel Church in Seoul which would usually expect up to 10,000 worshippers, but on Friday was only able to welcome 15 staff and choir members.

And in Catholic-majority Philippines, services were rocked when a 6.3-magnitude earthquake struck the country, capping off a troubled yuletide already muted by bans on parties and carol singing.

“Sad, very sad. Seeing everyone in masks, even the priest and altar servers, reminded me that the world as I know it is not the same,” said Manila resident Kyen Quimpo Mallonga after watching Christmas Eve mass on television instead of attending her local church. 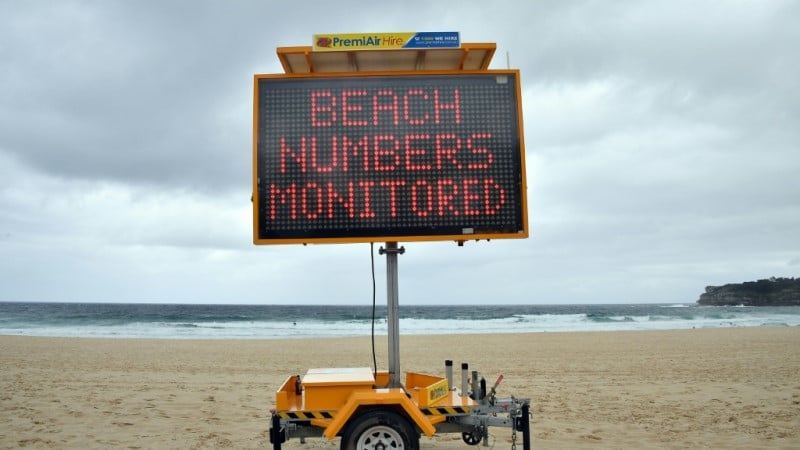 The usual picnicking crowds avoided the sands of Sydney’s famous Bondi Beach, while the waves were empty of surfing Santas

Bethlehem, where Christians believe Jesus was born, prepared for a Christmas unlike any in its recent history.

Christmas Eve mass at the Church of the Nativity is traditionally the highlight of a holiday season that sees hundreds of thousands of visitors flock to the Palestinian city in the occupied West Bank.

The service was held online this year, with only clergy and select individuals allowed inside the basilica. 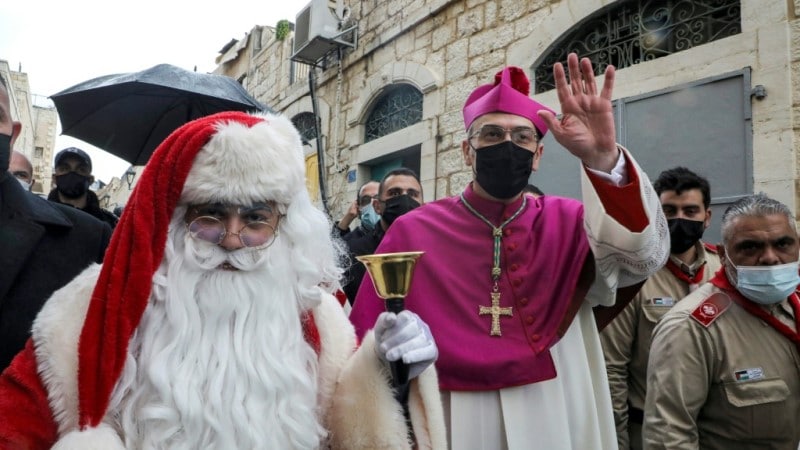 In Bethlehem, the Latin Patriarch of Jerusalem, Archbishop Pierbattista Pizzaballa, arrived to attend Christmas celebrations — walking alongside a man dressed as Father Christmas, or Santa Claus

“Everyone feels darkened, tired, exhausted, oppressed for too long under the heavy burden of this pandemic that besieges our lives,” said the Latin Patriarch of Jerusalem, Pierbattista Pizzaballa.

In war-ravaged northeast Syria, hundreds of residents of a predominantly Christian neighbourhood in the town of Qamishli ditched face masks and donned Santa hats, throwing caution to the wind to celebrate a Christmas tree lighting ceremony.

“We were concerned celebrations would be cancelled this year due to the novel coronavirus, but as you can see everyone is here celebrating and we are happy,” said Maria Danhou, a 36-year-old mother of two. 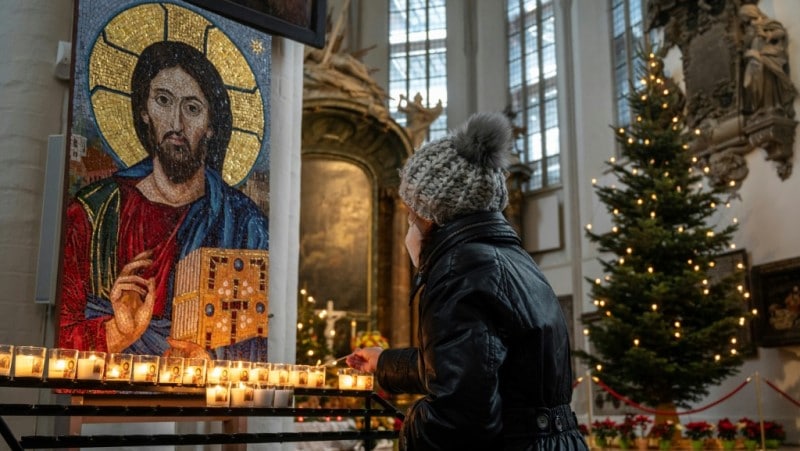 In Germany’s capital Berlin, a worshipper lights a candle in St Mary’s church ahead of an outdoor mass on Christmas Eve

Germany has been forced to cancel its famous Christmas markets, while in Kuwait, churches were closed until January 10 despite being home to a large Christian community.

For many, the isolation that has defined the past year will continue beyond Christmas Day — such as in Belgium, where residents are largely limited to welcoming a single visitor.

Britons, meanwhile, were cut off from swathes of the world due to the emergence of the new Covid-19 strain.

Some UK border restrictions have been temporarily relaxed for the holidays, but thousands from other European countries are still stranded in England.

“Home for Christmas? Forget it,” said Laurent Beghin, a French truck driver who delivered his cargo but was still stuck days later.

However more than 1,000 waiting trucks did arrive at the French port of Calais on Friday, with hopes that the bottleneck could be cleared by Saturday.