Complexity Behind China’s Launch of its Own GitHub Alternative 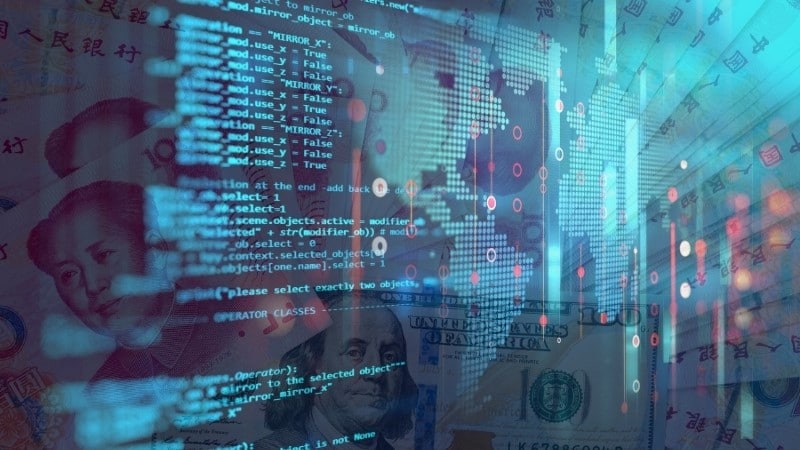 Is the latest tech development purely a strategic move to achieve industrial competitive advantage, or is it rooted in the nation’s quest for stringent information censorship, now reignited due to Covid-19?

As China’s technological superiority continues to surge, Chinese alternatives to popular global platforms are cementing their status in the global marketplace. Already in the last decade, China has replaced Google with its own Baidu, Twitter with Weibo, YouTube with YouKu, and Amazon with Taobao.

In order to further strengthen its own competitors, many of the aforementioned ‘foreign’ platforms, are in fact banned or heavily restricted in China. One platform, however, that has remained controversially unchallenged for years, is GitHub.

GitHub is the world’s number one open source software and code repository platform, popular with developers and programmers, who use it to build and share software and work on related projects. The platform is also praised by many for its stance and commitment to free speech and transparency.  It is important to note, however, that GitHub does have measures in place whereby an official government agency request may result in the takedown of unlawful content in a specified local jurisdiction. 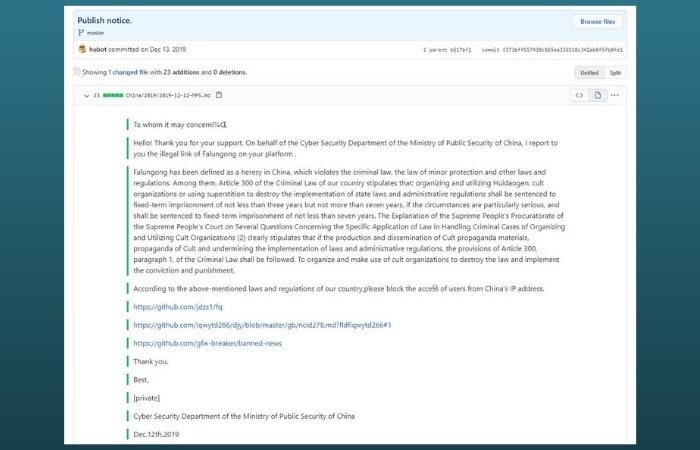 With China’s heavy online regulations and notorious censorship efforts, it may come as a surprise to many that GitHub has been allowed to be utilized for as long as it has (and still is). The main reason being, that China’s growing talent pool of software engineers and tech workers heavily rely on the platform’s many advantages. Naturally, as China hopes to become a global tech leader, accessibility to GitHub has been seen as a necessary sacrifice. As many suspect, however, GitHub may also be nearing its bitter end in China.

Gitee, China’s latest development, is aimed at ultimately replacing its Microsoft-owned rival. The 7-year-old platform, owned by OSCHINA, is now being molded into what is hoped to become an even larger code-cloud than GitHub, and one that can allow China’s homegrown tech to remain independent, and protected from foreign political scrutiny.

A blogpost from the official Gitee webpage elaborates how the new initiative – orchestrated by China’s Ministry of Industry and Information Technology (MIIT) – is aimed at supporting “domestic developers, providing them with a larger platform to display their talents, and accelerating innovation.”

Undoubtedly, this step is seen as an obvious and timely response to the ongoing political disputes between China and the U.S. This allegation, for the most part, is unsurprising given the events of last year’s Huawei controversy, and the more recent WeChat and DouYin (Tik Tok) conflicts in the U.S.

More Layers in the Equation

But is this strategic move merely a response to the political crossfires and technological decoupling between the two superpowers, or is there an ulterior motive for the push in development? While the lessened reliance on U.S. technology is an obvious added advantage, there might just be another, grander purpose, one that is more in-line with China’s steady record of information censorship, and stringent communication channels with the outside world.

Diving a few months back, more specifically; mid-late January, when the Covid-19 pandemic first began to make global headlines, China – being the epicenter of the outbreak – had its struggles with information management.

It is not new for China to be cautious (for lack of a better word) with regards to outflow of sensitive information, and particularly during the start of the outbreak, heavy control was placed on what information was communicated about the virus.

A mixture of propagated misinformation, a lack of transparency, and general public fear, has led to desperate efforts from concerned citizens to dig up and share whatever became available. With most foreign social media platforms inaccessible, GitHub became an unlikely contender for the task. In a brave joint effort by volunteer ‘netizens’, any and all news reports, findings, and personal accounts related to the disease were gathered and published on GitHub. 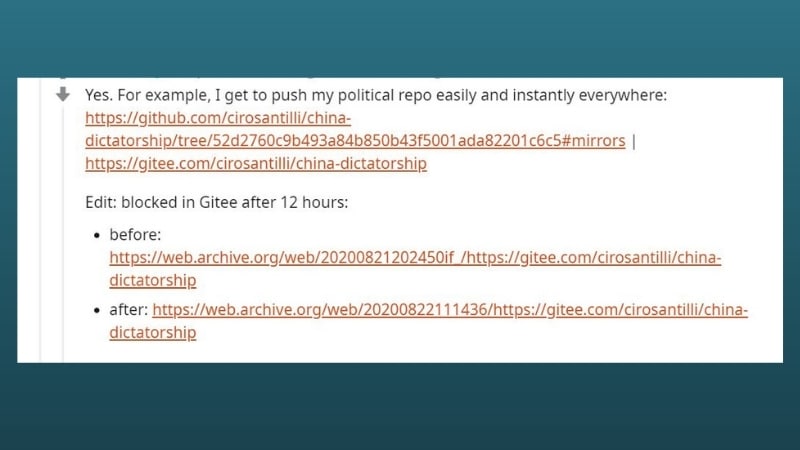 A Github user demonstrates Gitee took down a political repo within 12 hours, while a Github repo still remains. Orignal archived Post at Gitee and afterwards

Participants in this crowdsourced-database project were well aware that daring to publish social posts that may be deemed critical or sensitive on Chinese platforms, could spell trouble. Attempting to bypass the infamous ‘Great Firewall’ can have consequences as well.

Evidently, desperate times call for desperate measures, and with fears of crucial virus-related information and personal stories otherwise being buried and lost, the project continued to grow, and gain increased viewership from Chinese internet users, who now consider GitHub the “last remaining land” for uncensored free speech in China. This case quickly became resonant of another famed event where GitHub was used to voice the hardships of the “996 schedule” in China’s tech industry.

The end result of this ambitious move may see both a hard blow for China’s tech professionals, who may lose access to GitHub’s still very necessary database, as well as add another layer of censorship and control on information outflow in general. Hopefully, this will still allow for new innovative ways for unvoiced individuals to find a new platform or method where communication is uncensored, and where freedom is not diminished. As for the global tech community, time will tell whether Gitee’s strive for dominance will allow for the rise of a new medium where developments and joint efforts between China and the world can accelerate.