Eight Days in Wuhan, Cut off from the World 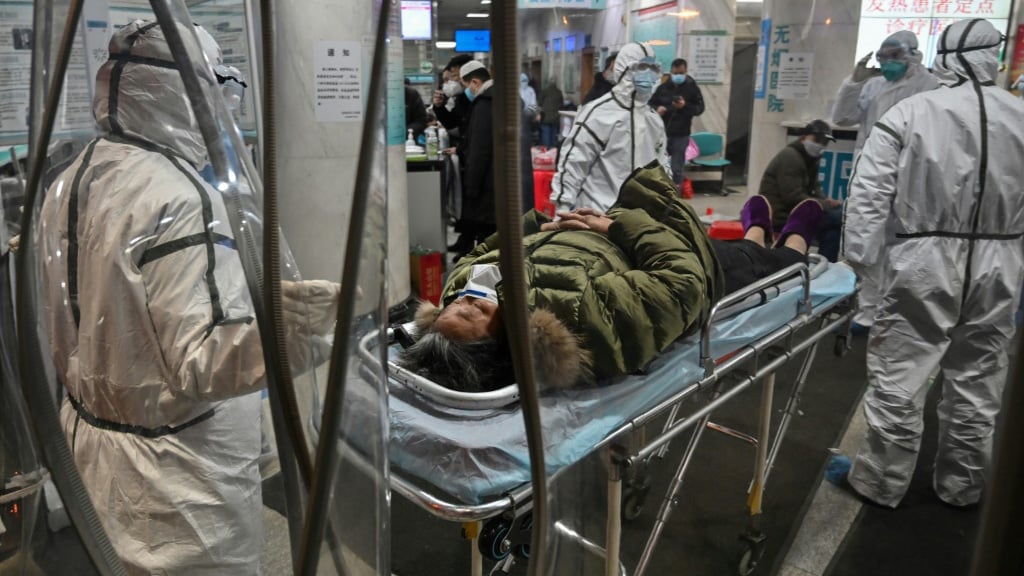 The strain of coronavirus that has infected people across China at an alarming rate, is believed to have originated from animal hosts

For eight days, an AFP team lived and worked at the center of a global health emergency, witnessing how life in the Chinese city of Wuhan was turned upside down as it was cut off from the world.

The city of 11 million was placed under an unprecedented quarantine to try and stop the spread of a deadly new coronavirus.

The virus, which has since gone on to kill more than 1,000 people across China, is believed to have crossed into humans from an animal market in Wuhan.

The AFP team arrived in Wuhan the day the city was placed under lockdown, and over the next week captured remarkable images of shock and resignation, despair and bravery.

AFP on Wednesday re-publishes some of the team’s most compelling images, along with this new multimedia account of the harrowing events: 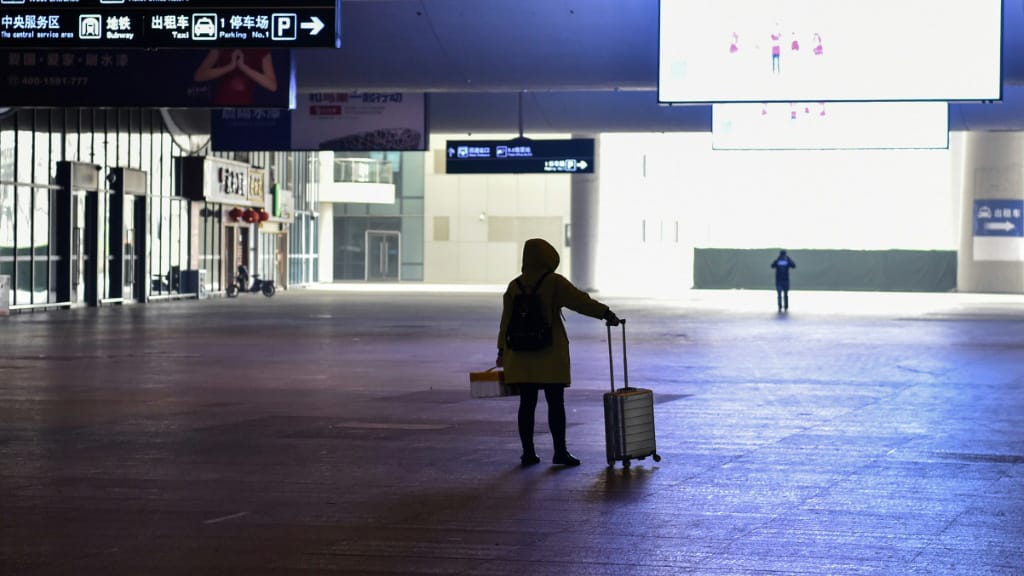 Travelers race out of Wuhan before the lockdown which halted air, road and train links

Day One: The Lockdown

In the early hours of January 23, China announces that all air, road and train links out of Wuhan will be suspended.

The virus has killed 17 people and infected more than 500, authorities say, just as millions of people are criss-crossing the country to reunite with friends and family for the Lunar New Year holiday.

The news comes as a shock, and most don’t even try to flee Wuhan before the order comes into force at 10 am.

But the few locals out on the streets do seem to be obeying the new rules that masks must be worn in public.

The railway station prepares to close later that day, with police chasing the last travelers out of the building.

The usually bustling airport is deserted. Even the officials tasked a few hours ago with testing passengers for signs of fever have gone.

A handful of travelers are stuck, and an airport employee says she does not know when her shift will finish in the confusion.

The expressway into town is empty, as are the rest of the roads in the metropolis.

Wuhan has just been cut off from the world and its people, terrified of being infected, are confining themselves to their homes.

Hours before the Lunar New Year, shops are closed and there is a ghostly silence hanging over the city.

The police and security services — usually so prominent on Chinese city streets — are conspicuous by their absence.

The Qiaokou district and its famous Jinghan avenue look like they had been abandoned. All of the boutique shops inside an imposing business complex are shuttered by metal gates.

In a small apartment in a 20-story building in the south of the city, Wang Yanhong, 53, welcomes a team of foreign journalists for the eve of the Lunar New Year.

Her husband Pen Lixin prepares a variety of dishes and a bottle of local red wine sits on the table.

But the atmosphere is not one of celebration: the quarantining of Wuhan has meant that their son Andy, 25, was unable to make it home.

“This is the first time he hasn’t come home to celebrate New Year with us,” says Wang sadly. 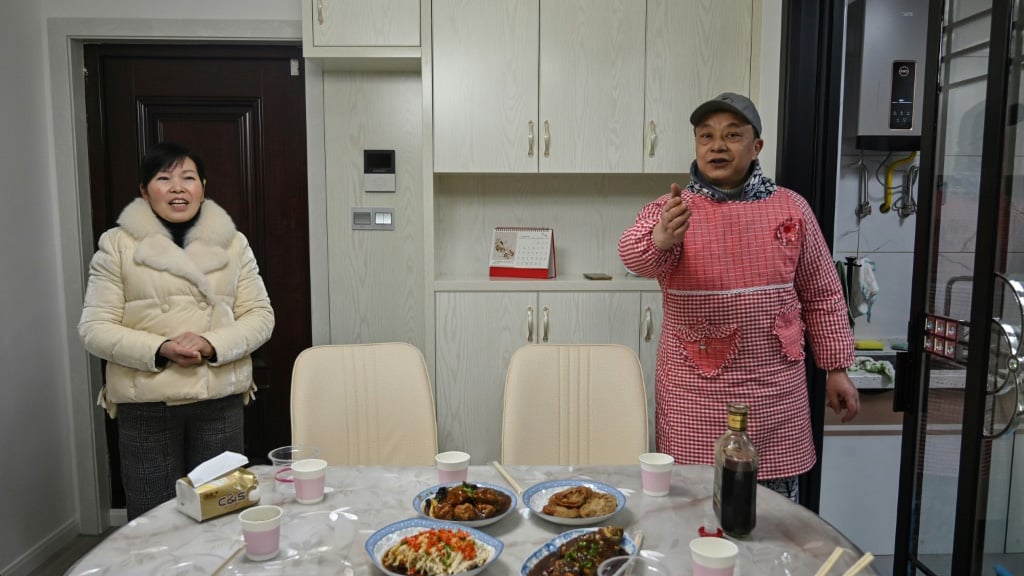 The Guiyuan temple, normally packed with hundreds of thousands of people welcoming in the New Year, is closed.

“No-one is allowed inside in order to prevent the virus spreading,” a uniformed man — who is not wearing the compulsory mask — tells AFP.

About town, the usual New Year visits are limited to a worried dash to the pharmacy, where customers are greeted by staff wearing full-body protective suits and double masks.

Anti-fever tablets are limited to two boxes per person.

The radio broadcasts on this first day of the Year of the Rat are hardly any more festive.

Messages on virus prevention, call for the wearing of masks and a song set to a rap beat tells Wuhan’s people that they are “strong enough to defeat the virus”. 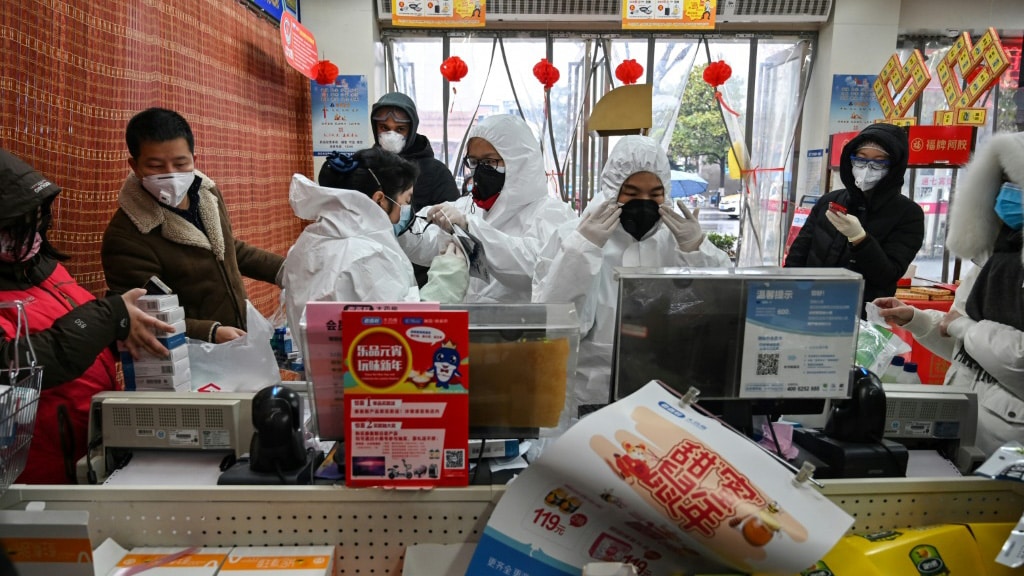 Customers are greeted by pharmacy staffs with full protective suits and masks.

In the hospitals visited by AFP, people queue up in long lines to see a doctor.

The wait is so long that some have brought their own chairs.

One feverish man in his 30s prepares to queue all night in order to see a doctor the next day.

“Like a horror film,” says one witness, who tells AFP bodies were left unattended for hours.

About 20 kilometers from the city center, where policeman roadblocks, nurses are allowed into the city to help exhausted colleagues in the hospitals. 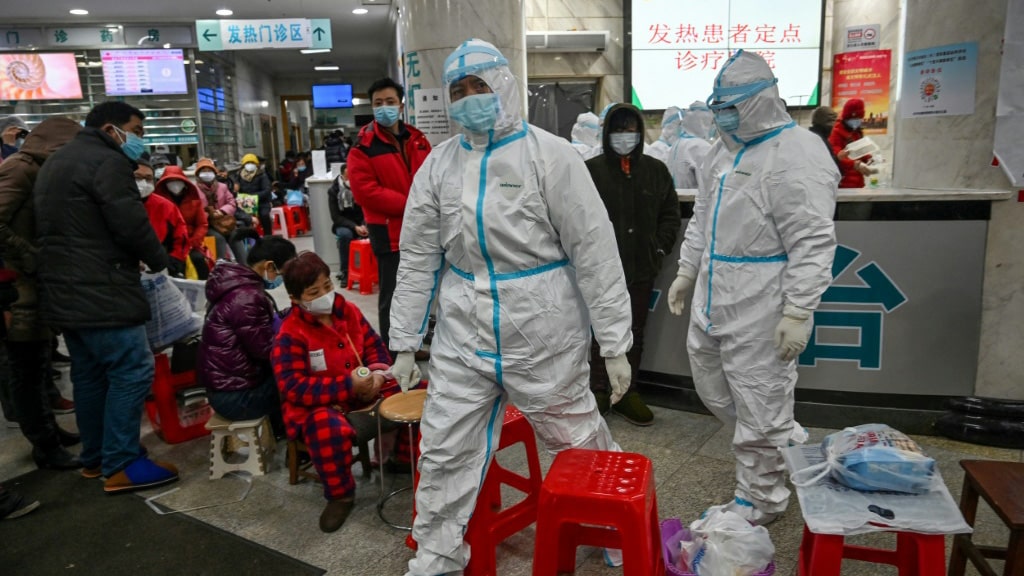 All non-essential traffic has been banned since midnight. Taxis have been requisitioned.

On the outskirts, hundreds of workers who arrive just days earlier are building two new hospitals from scratch.

Across a vast stretch of muddy ground, cranes and excavators dance a ballet, as they race to finish a 1,000-bed medical facility within days.

“We’ve got to go fast so we can beat the virus,” says one man, who has been working nine hours a day and sleeps near the construction site.

People have been instructed to stay in their homes, but some ignore the risk of infection and venture out to help.

A man named Zhang Lin and other volunteers ferry sick people to and from the hospital in their cars.

“We need to take the initiative and help out,” he says as he waits outside a clinic to take a patient home.

That evening on the edge of the Yangtze river, four Chinese characters are lit up in pink: “Let’s go Wuhan”.

The slogan will become a rallying cry for the city. 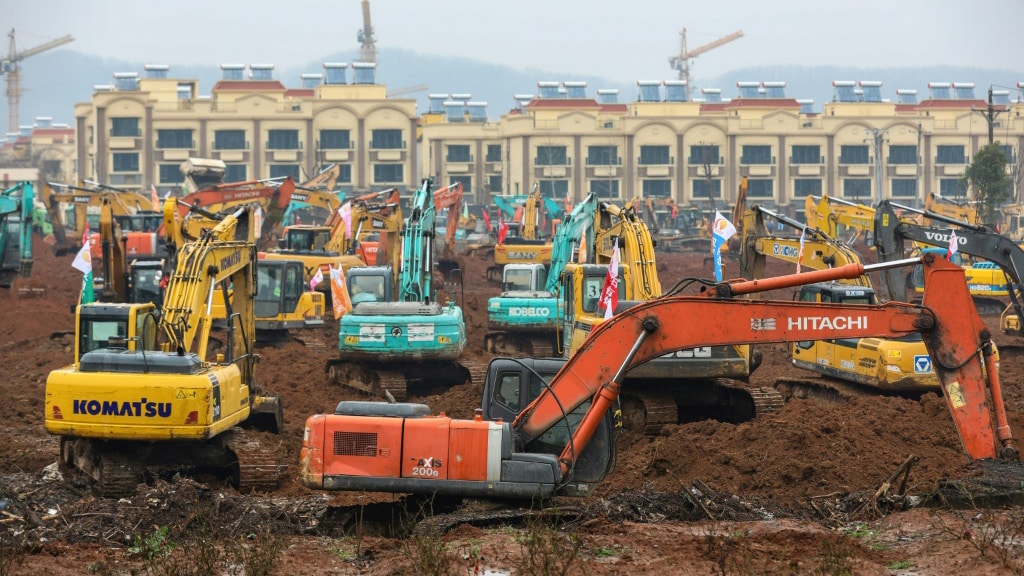 Wuhan builds two big hospitals from scratch, bringing together workers and specialists from various parts of the country

As the city passes five days under lockdown, foreign countries begin planning to evacuate their citizens in Wuhan.

But that doesn’t appeal to Remy, a Frenchman who has been living in Wuhan for eight years.

“For the moment, it’s fine here,” says the 33-year old, wearing a blue face mask.
He’s not been leaving his apartment though, just like students from the Dominican Republic, who were waiting desperately for news from their embassy. 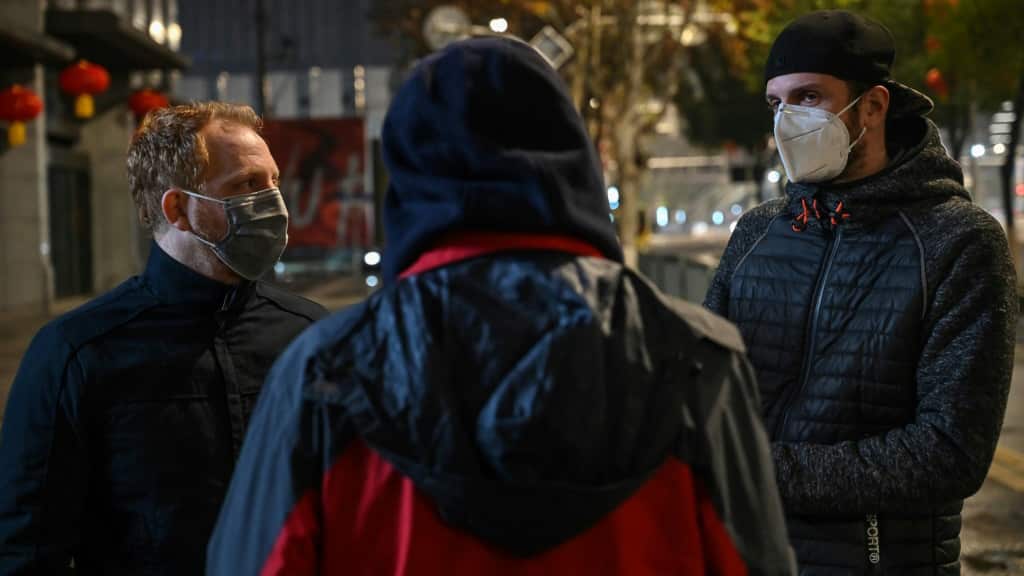 French residents in Wuhan, Remy (L) and Jonathan (R) speak during an interview with AFP about the possibility of being evacuated from Wuhan

Compulsory masks, temperature checks and no restaurant: welcome to the Marco Polo Hotel, one of the few in Wuhan that has not closed its doors.

You know something is wrong as soon as you enter. There’s no-one at reception, and there is a heavy silence, which jars with the festive decorations all around.

The terrified staff serves the few customers their meals in their rooms.

A guard takes the temperature of customers every time they go out or come back.

“Below 37.3 C (Fahrenheit) it’s fine; above, and we take the necessary measures,” says a thermometer-wielding Xiao Fan. 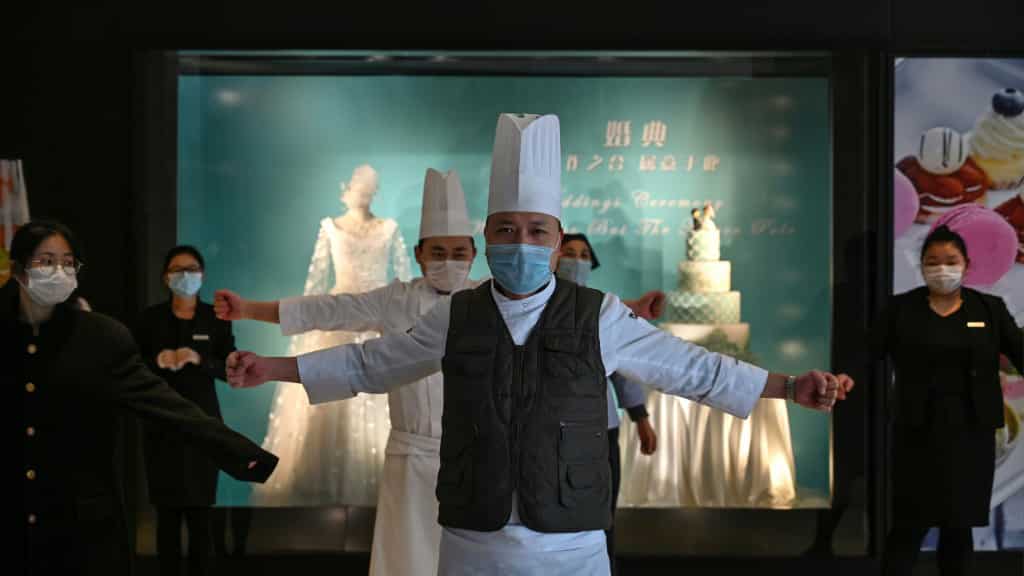 Hotel workers wearing protective face masks exercise in the lobby of the Marco Polo Hotel in Wuhan, one of the few that didn’t close its

Day 8: Death in the Street

The body of a man in his 60s lies stiff on his back in front of a closed furniture store, near a hospital. He’s still wearing a face mask.

Officials in hazard suits take every precaution as they approach the body.

A team of forensic experts who examined him are immediately sprayed with disinfectant by colleagues after removing their hazardous material suits.

The body is placed in a yellow surgical bag and taken away in a van as distraught residents look on. The area is disinfected.

“It’s terrible,” says one. “So many people have died in recent days.” 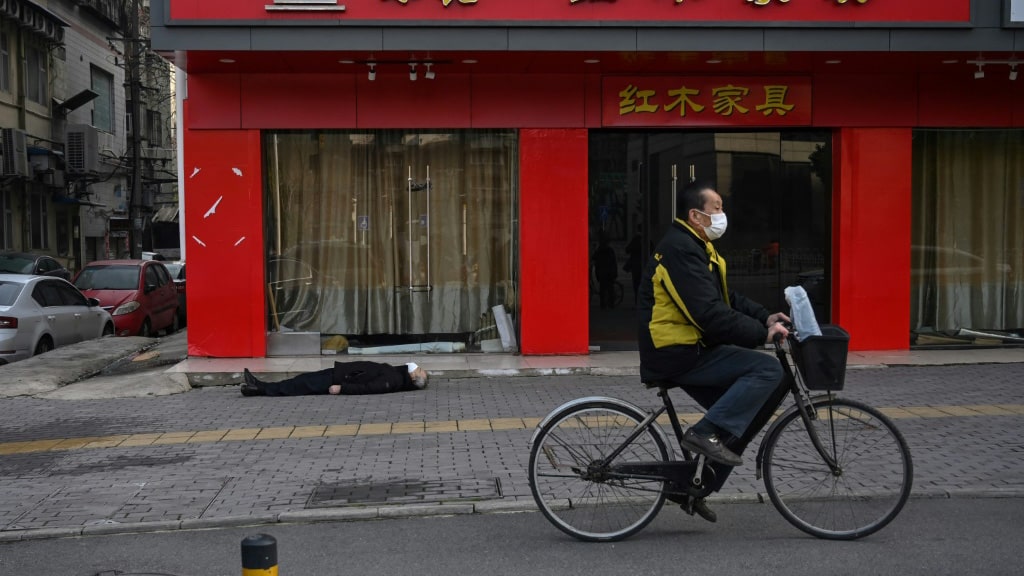 An alarming scene of a dead man in the street of Wuhan, still wearing a face mask