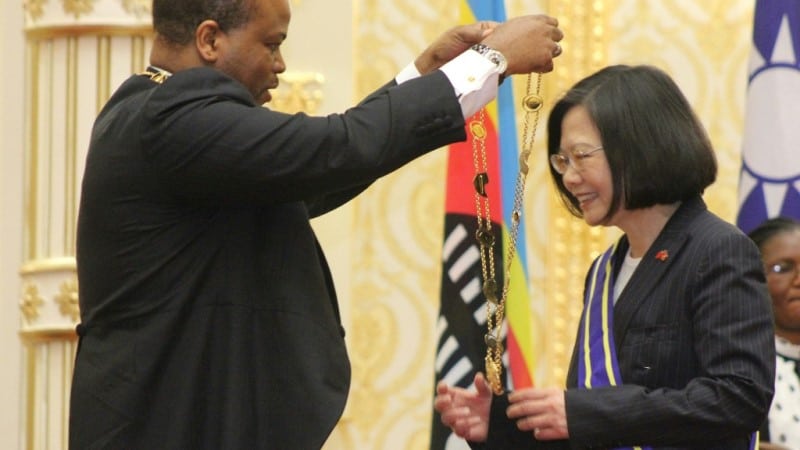 ​King Mswati III bestowed the Order of the Elephant, Eswatini’s highest honour for a foreign leader, on Taiwan President Tsai Ing-wen when she visited the kingdom in April 2018

The king of Eswatini on Friday said he had recovered from Covid-19 in January after taking an anti-viral drug sent by Taiwan, with which the kingdom maintains diplomatic relations.

The tiny southern African country is the only state on the continent still resisting Chinese pressure to cut ties with Taiwan, which Beijing regards as a renegade province.

King Mswati III, Africa’s last absolute monarch, on Friday thanked the Taiwanese president for sending the medication, which he did not name, and said the government would “immediately” procure it for the rest of the country.

Eswatini, formerly known as Swaziland, has been struggling to stem a second coronavirus infection wave and is yet to receive its first vaccines.

“While we await the arrival of these vaccines, I wish to share that there is treatment through the use of an anti-viral drug,” Mswati III said during an address to parliament.

“We discovered this medicine after I tested Covid-19 positive for a couple of days on the first week of January 2021,” he explained.

“I am grateful to the president of the Republic of China on Taiwan for sending through this medication.”

The 52-year-old king had not previously reported his coronavirus infection.

He said the drug, which was administered through a drip, had allowed him to recover before he even had time to announce his hospitalization.

“It has a remarkable success,” he touted. “Emaswati (the people of Eswatini) must seek this drug as soon as one discovers they are positive.”

Mswati III also touched on vaccine procurement, saying the government been instructed to acquire jabs “as soon as possible”.

“However, it may take a while as they are not easily available,” he warned.

Eswatini has recorded over 16,700 coronavirus cases and at least 640 deaths for a population of roughly 1.2 million.

China regards Taiwan as a breakaway province and does not allow countries to have diplomatic ties with both itself and the island.

Burkina Faso was the last African country to switch to China in May 2018, leaving Eswatini alone in Africa to have diplomatic relations with Taipei.