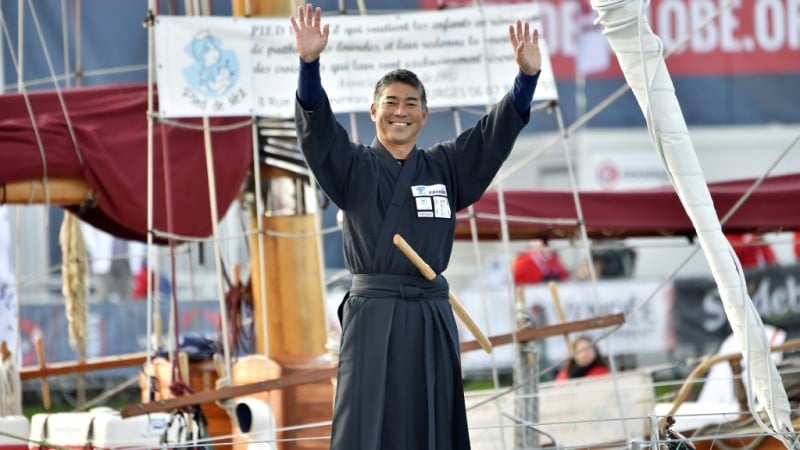 ‘Like a UFO’: Japanese sailor Kojiro Shiraishi before the start of the 2016 Vendee Globe

As far as Kojiro Shiraishi is concerned, a Japanese sailing the grueling Vendee Globe round-the-world race is akin to a Frenchman taking up sumo wrestling.

“It’s a miracle,” says Shiraishi who will return to the epic high seas adventure in November after making his debut four years ago.

Back in 2016, the sailor, who hails from Kamakura, a Pacific coastal town to the south of Tokyo, cut a dash by posing on the quay at the start line dressed in traditional Japanese costume and carrying a ceremonial saber in his belt.

Now, the 53-year-old has a high-performance boat, sponsors, as well as the status of a professional sailor.

Shiraishi’s love of the high seas and single-handed racing was nurtured in his home town.

It became a full-blown love affair after meeting mentor Yukoh Tada, the pioneering Japanese yachtsman who committed suicide in 1991.

Each craft sailed by Shiraishi bears the name ‘Spirit of Yukoh’.

“I got to know the Vendee Globe thanks to my master, Yukoh Tada.

“I came to see the start of the race three times and I said to myself that one day I will do this race,” Shiraishi told AFP.

His first attempt in 2016, when he was the first Asian to take part in the race, ended in disappointment with a demasting on his 10-year-old vessel in the Indian Ocean.

“It was a last-minute project, even getting to the start line was a great victory,” he added.

“Being Japanese and trying to do the Vendee Globe is extremely difficult – it’s a like a Frenchman leaving for Japan to become a sumo wrestler.

Shiraishi has been helped in his preparations by noted French navigator Roland Jourdain.

“Kojiro is great. He has had the fortune and talent to find a sponsor, to have a brand new boat, a flying boat,” said Jourdain.

Although the start of the 2020 race is still three months away, the memory of his 2016 experience remains a bitter one for Shiraishi.

He had been at sea barely a month when he lost his mast off South Africa.

“It was really something that overwhelmed me. It was a 30-year dream that ended prematurely,” he recalled.

“But when I arrived in Cape Town, I saw all the messages of support from Japan. I told myself that this would be the start of my next race in four years.”

Despite the premature end to that race, Shiraishi became something of a celebrity back home, helped by widespread TV coverage afforded by NHK and TV Asahi.

This time round, machine tool maker DMG Mori has become his major financial backer allowing him the luxury of a state-of-the-art craft.

In and around the west coast of France where sailing is in the blood, the Japanese remains something of a curiosity.

“He doesn’t speak French, very little English, so he has little contact.

“But this disadvantage is actually a strength too, he builds his inner world, a way of approaching his race.

“He has a truly zen and ultra-positive disposition and for a Vendee Globe that’s a huge strength.”