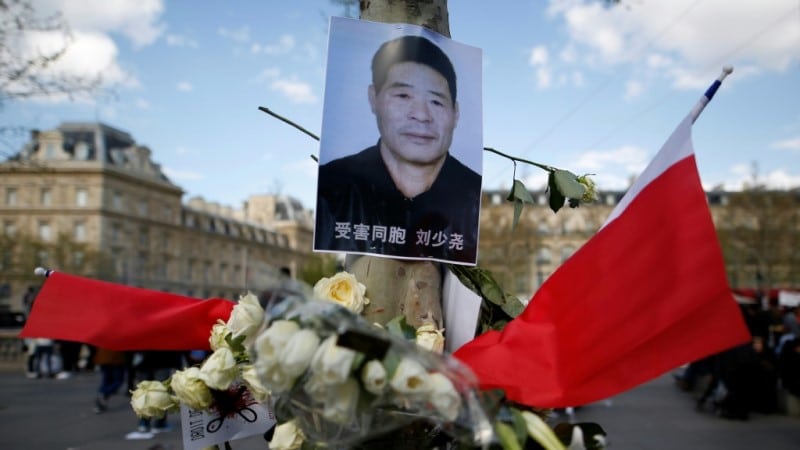 Shaoyao Liu lived in France for nearly three decades, having arrived as an undocumented migrant from China’s eastern Zhejiang province in the 1990s

A French court on Tuesday dismissed a case against an officer who shot dead a Chinese father of five in his home, in an alleged case of police brutality that triggered a rebuke from Beijing and protests in the Asian community.

No charges were ever brought against the officer, who claimed he was defending a colleague when he shot Shaoyao Liu in the heart in front of two of his daughters on March 26, 2017.

On Tuesday, the Paris court of appeal rejected an appeal by Liu’s family over the decision not to prosecute the officer, dealing a blow to their three-year campaign for justice.

The family’s lawyer Pierre Lumbroso blasted what he called the “duplicity between the police and the judiciary” and announced plans to take the case all the way to France’s highest appeal court.

The officer, named as Damien V., claimed that Liu, 56, stabbed his colleague with a pair of scissors after they were called to the apartment over a suspected domestic row.

Liu’s family reject that version of events, saying he had been using the scissors to scale fish when the police burst in and shot him.

The officer’s lawyer was not available for comment on Tuesday.

One of Liu’s neighbours, a retired policeman, called the police, saying he saw Liu, who struggled with alcoholism and depression, waving what he thought was a knife on the landing.

Ten minutes later, three officers arrived at Liu’s apartment in the 19th district of Paris and ordered him to let them in.

When he refused they broke down the door and seconds later fired the fatal shot.

One officer accused Liu of attacking him with a pair of scissors.

His two partners said they heard him shout “he’s stabbing me”, whereupon one of them opened fire with his 9mm pistol, killing Liu instantly.

A medical report noted that the policeman who claimed to have been stabbed had sustained a cut in the armpit measuring 1 centimeter that required a single stitch.

French police have repeatedly come under fire for alleged brutality during operations in poor parts of Paris and its high-rise suburbs.

Prosecutors have recommended that three officers stand trial over that attack.

In July this year, three officers were charged with manslaughter over the death of delivery man Cedric Chouviat who was held in a chokehold during his arrest for a traffic offense.

After Liu’s death, hundreds of members of the Asian community and anti-racism groups held protests outside the police station of the 19th district, shouting “police murderers” and “injustice”.

The Chinese government also filed an official complaint to France and asked Paris to “guarantee the safety and legal rights and interests of Chinese citizens in France.”

Liu’s family denies that he attacked the officer and suggested that the cut he sustained was made after Liu’s death.

Liu lived in France for nearly three decades, having arrived as an undocumented migrant from China’s eastern Zhejiang province in the 1990s.