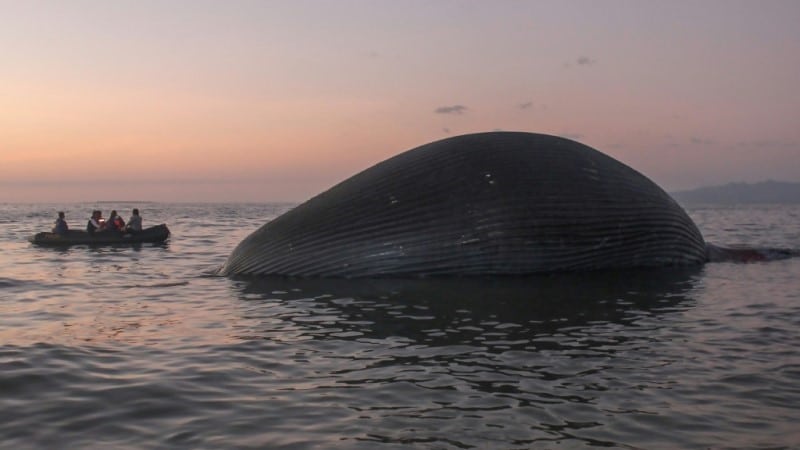 A giant 23-meter (75-foot) whale briefly washed up near a beach in Indonesia but it was unclear how the enormous marine mammal died, a conservation official said Wednesday.

Curious onlookers crowded the shore of coastal Kupang city as officials scrambled to figure out what to do with the bloated carcass, which was first spotted on Tuesday.

But the giant creature was washed back to sea on Wednesday before it could be brought to shore for an examination.

“We think that it’s a blue whale but we don’t know what caused its death,” said local conservation official Lidya Tesa Saputra.

“It looks like it didn’t die here and may have been deceased for some time,” she added.

Blue whales are the largest animals in existence, weighing up to 200 tons and growing as long as 32 meters.

The creature, whose tongue alone can weigh as much as an elephant, has an average lifespan of 80 to 90 years, according to National Geographic.

Cross-currents off the beach pose a danger to whales as they can get caught between reefs close to shore.

In 2018, a sperm whale was found dead in Indonesia with more than 100 plastic cups and 25 plastic bags in its stomach, raising concerns about the Southeast Asian archipelago’s massive marine rubbish problem.