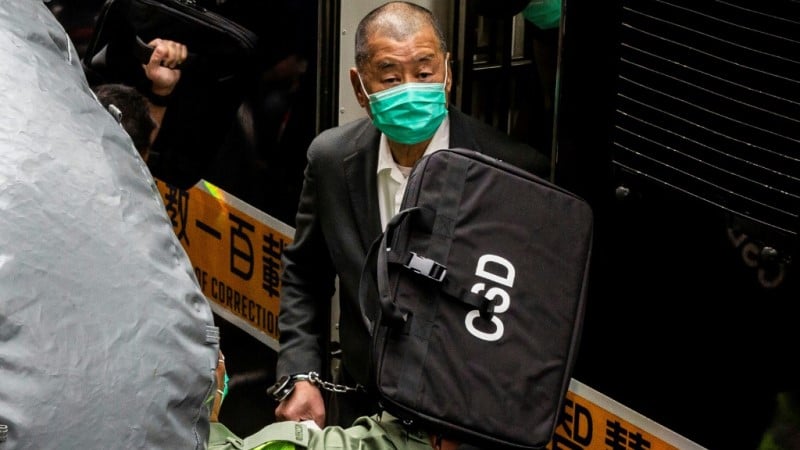 Hong Kong police have arrested Jimmy Lai on suspicion of trying to help a fugitive flee the city, his own newspaper reported Wednesday, as authorities stack up criminal cases against the outspoken media tycoon.

Apple Daily, which is owned by Lai, reported that the 73-year-old was arrested inside Stanley Prison on Tuesday.

Lai is already in custody, having been charged in December under a national security law Beijing imposed on the city last year.

He is also among a group of nine leading dissidents currently on trial for organizing one of the huge pro-democracy rallies that swept Hong Kong in 2019.

Police did not respond to requests for comment on Lai’s arrest, which was also reported by the Oriental Daily newspaper.

Apple Daily said the new arrest was linked to Andy Li, one of a group of 12 Hong Kongers who made a failed attempt to flee last summer by speedboat to nearby Taiwan.

Lai’s latest arrest was also made under the national security law, the paper added.

The so-called “speedboat fugitives” were picked up by Chinese coastguards and — with the exception of two minors — jailed on the mainland.

Reports of Lai’s arrest came as a 29-year-old man appeared in court on Wednesday charged with a national security crime for allegedly working with Lai and others to campaign for international sanctions.

Chan Tsz-wah was charged with trying to “collude with foreign forces”, the same offense as Lai, and denied bail.

He was also charged with “assisting an offender” and linked to the same speedboat case.

During the hearing, prosecutors accused Chan of helping Li, who was also arrested for collusion alongside Lai before he skipped bail.

Jimmy Lai is a vocal Beijing critic and has found himself increasingly tangled in court cases and prosecutions.

China has made no secret of its desire to see him silenced.

He is routinely vilified as a traitor by state media, for pushing to have Beijing sanctioned over its crackdown against Hong Kong’s democracy movement.

Since the new security law was imposed last June, about 100 people have been arrested under it, and five charged.

All those charged have been denied bail.