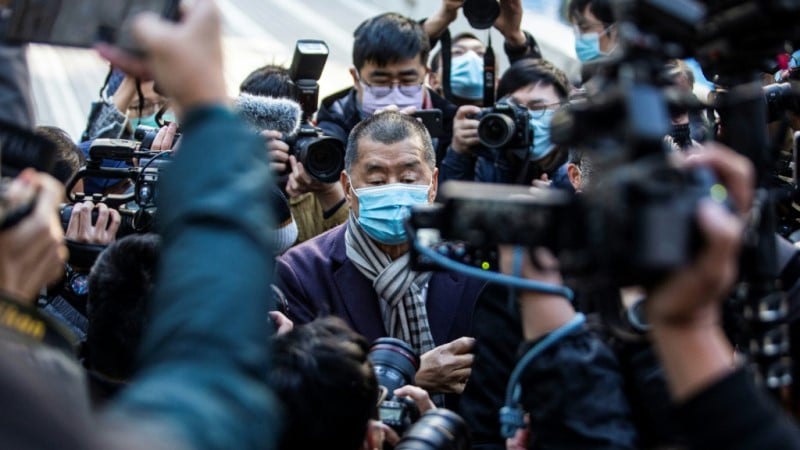 The landmark case puts the city’s independent judiciary on a potentially precarious collision course with China’s authoritarian leadership as Beijing seeks to snuff out dissent in the restless financial hub.

Lai, 73, who owns the pro-democracy tabloid Apple Daily, is one of more than 100 democracy supporters arrested under the new law since it was enacted in June, and the highest-profile figure to be incarcerated on pretrial charges.

He has been charged with “colluding with foreign forces” — one of the new security crimes — for allegedly calling for sanctions on Hong Kong and China in response to the crackdown on dissent.

The security law is the most dramatic shift in Hong Kong’s relationship with China since it was handed back by Britain in 1997. It criminalizes a host of political views and toppled the legal firewall between the two territories.

Written in Beijing and imposed by fiat, it allows mainland security agents to operate openly in the city for the first time, and even grants China jurisdiction in some cases.

Another precedent-setting element of the law is no presumption of bail — a hallmark of Hong Kong’s independent common law legal system.

That is what Jimmy Lai and his lawyers were seeking to challenge on Monday.

Lai was detained in December and initially granted bail after agreeing to a stringent list of requirements — including house arrest and no interviews or social media posts.

But he was put back behind bars days later by the Court of Final Appeal pending this week’s full hearing.

A panel of top judges will now have to balance the wording of Beijing’s law against the city’s common law traditions, its mini-constitution and its Bill of Rights, which supposedly guarantee freedom of speech and a presumption of bail for non-violent crimes.

Legal analysts say the outcome will give an indication of whether Hong Kong’s judiciary will serve — or even can serve — as any kind of constitutional brake against Beijing’s security law.

“Today’s hearing is likely to be the single most important and consequential court hearing in Hong Kong’s post-1997 history,” Antony Dapiran, a Hong Kong lawyer and author, told AFP.

Throughout the hearing on Monday, the panel of five judges challenged prosecutors on why bail should not be granted given Lai had agreed to strict house arrest measures.

Government lawyers countered that Beijing’s law made clear it wanted those charged with security law crimes to be denied bail.

The judges said they would deliver their ruling at a later date, and Lai was returned to custody.

The judiciary is in a precarious position.

In Hong Kong’s complex constitutional hierarchy the ultimate arbiter of the laws is Beijing’s Standing Committee, which has shown an increased willingness in recent years to wade into legal arguments and make pronouncements.

China’s state media have already declared Lai guilty and made clear authorities expect Hong Kong’s judges to side with Beijing on national security.

Senior Chinese officials have recently backed calls to “reform” Hong Kong’s judiciary, something opponents fear signals support for a more mainland-style legal system that answers to the Communist Party and where convictions are all but guaranteed.

Outside court on Monday, small groups of nationalist protesters gathered, two dressed as the coronavirus and holding banners that described Lai’s newspaper as “poison”.

Others heckled Lai’s supporters, including 89-year-old Cardinal Joseph Zen, a veteran democracy advocate who was called a “dog” and a “traitor” by the pro-Beijing protesters as he arrived at the court.