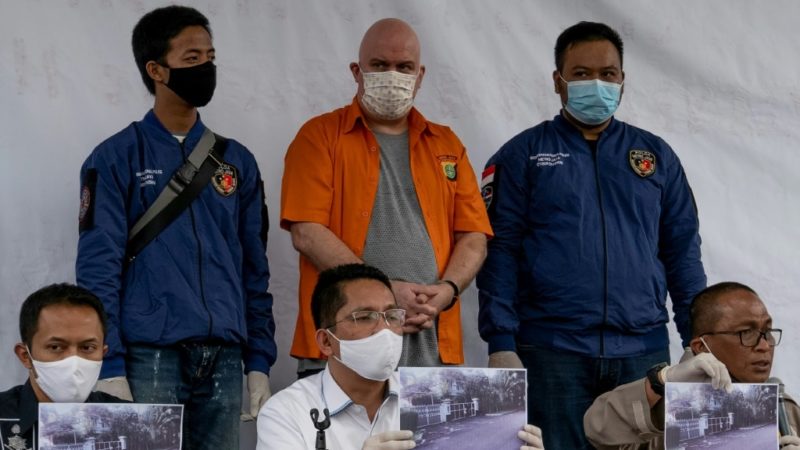 Russ Medlin (standing center), an American wanted by the US Federal Bureau of Investigation, was paraded by Indonesian police following his arrest on child-sex charges

An American fugitive wanted at home in connection with a $700 million cryptocurrency scam has been arrested in Jakarta on sex charges, Indonesian authorities said Tuesday.

Russ Medlin, who entered the Southeast Asian nation on a tourist visa last year, was nabbed in the capital Monday after three teenage girls alleged he paid to have sex with them, police said.

If convicted under Indonesia‘s child protection laws, Medlin could face up to 15 years in prison, police said, adding that they confiscated more than $20,000 in cash from the suspect.

According to the Nevada State sex offender public website, a Russ Albert Medlin was listed as a “non compliant” tier-two offender — the second most serious — with a Las Vegas address.

In December, the US Justice Department said three men had been arrested in an alleged fraud that raised $722 million from investors lured by fake bitcoin mining earnings.

Prosecutors in the United States allege Medlin headed the “BitClub Network,” which took money from investors in a “high-tech Ponzi scheme”.

From April 2014 through December 2019 the group attracted unsuspecting investors using fraudulent earnings purported to come from the network’s mining pool, according to prosecutors.

It was not immediately clear if US authorities would seek Medlin’s extradition in the cryptocurrrency case.

“We are still waiting for a request from the US Embassy,” Jakarta police’s special investigation director Roma Hutajulu said Tuesday.

The US embassy did not immediately reply to requests for comment.