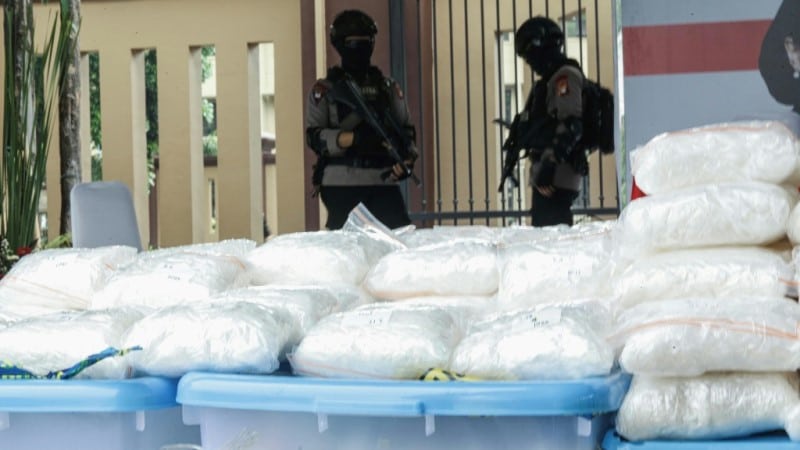 Indonesian police said Wednesday they have smashed a drug smuggling ring that moved 2.5 tons of methamphetamine into the country from Afghanistan, a haul worth about $82 million.

One Indonesian suspect was shot dead while 17 others including a Nigerian were arrested during a series of police raids in Sumatra’s Aceh province and the capital Jakarta in recent weeks, they said.

Some of the meth had been placed inside food containers and then hidden in boats or lockers on land.

The haul was displayed in piles at a Jakarta press briefing Wednesday.

Some of the suspects who were arrested are already in prison on drugs offenses including a number condemned to die for trafficking under Indonesia’s tough drug laws, police said, without giving details.

The incarcerated suspects were key players in the drugs ring from behind bars, they added.

The Southeast Asian archipelago has become a key destination and transit point for international drug trafficking.

In 2018, Indonesian police said two separate busts resulted in the seizure of about three tons of methamphetamine coming from Taiwan.

This month, 13 members of a trafficking ring, including three Iranians and a Pakistani, were sentenced to die for smuggling 400 kilograms (880 pounds) of methamphetamine into Indonesia.

Several foreign and Indonesian nationals have been executed by firing squad in recent years for drug trafficking, including Australians Andrew Chan and Myuran Sukumaran in 2015.

The pair were the accused ringleaders of the Bali Nine heroin gang.