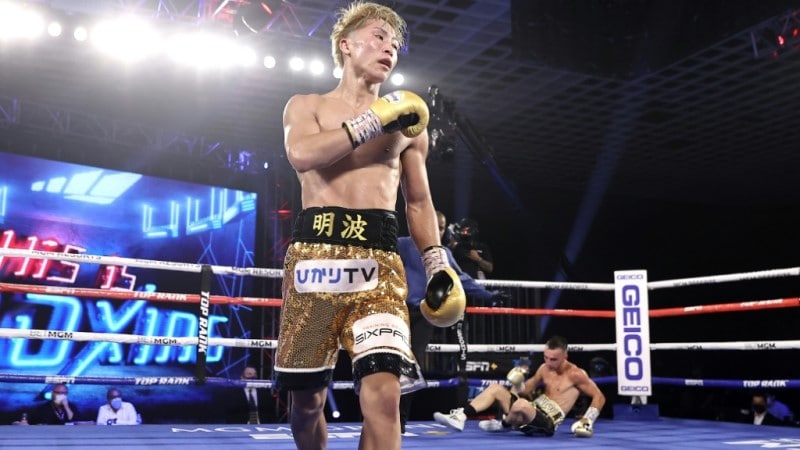 The undefeated Japanese superstar floored Moloney with a shuddering punch near the end of the round to retain both belts in spectacular fashion at the MGM Grand Hotel and Casino.

The 27-year-old Inoue landed a vicious straight right that buckled Moloney’s knees in the 118-pound fight and the Australian was unable to beat the count with just one second left in the round.

“The final punch, I’m very happy and satisfied with that punch,” said Inoue. “Moloney has great defense it was difficult to get through.”

Inoue scored two knockdowns and improved to a perfect 20-0 with 17 knockouts while Moloney dropped to 21-2 with 18 KOs.

Inoue dominated throughout the fight which was held inside the quarantine bubble at the luxury casino on the Las Vegas strip.

Inoue’s devastating punching power was on full display as he showed why he is nicknamed ‘Monster’.

Inoue first knocked down Moloney in the sixth round with a left hook on the counter. He ended it one round later with a short right hand. Moloney tried to get back to his feet but was unable and referee Kenny Bayless counted him out at 2:59 of the round.

Inoue unified the IBF and WBA crowns last November by winning the World Boxing Super Series final over Filipino star Nonito Donaire by unanimous decision in a pulsating “fight of the year” contender.

The Japanese knockout specialist had dispatching his four prior foes in less than three rounds.

Inoue was to have faced another Filipino, John Riel Casimero, in April but the bout was wiped out by the coronavirus pandemic.

The 29-year-old Moloney stopped Mexico’s Leonardo Baez after seven rounds in June but he was overmatched against the speed and power of Inoue.