by Eric Randolph
The school on the outskirts of Istanbul is a rare place where Uighur child refugees from China can study their language and culture.

But for several, it has also become an impromptu orphanage.

Having fled a worsening crackdown on Uighur Muslims in northwest China, some of their parents thought it was still safe to return occasionally for business and to visit family, only to disappear into a shadowy network of re-education camps from which no communication is permitted.

Out of just over a hundred pupils at the school, 26 have lost one parent to the camps, seven have lost both, says its head Habibullah Kuseni.

Nine-year-old Fatima has only vague memories of her homeland — and now, of her father, too.

She remembers watching television with him: she wanted cartoons, but he liked watching the news especially about Turkey’s president, Recep Tayyip Erdogan, one of the only leaders in the Muslim world willing to stand up for the Uighurs and risk China’s wrath.

Her father flew back to China from time to time for business before anyone knew about the camps in the Xinjiang region. 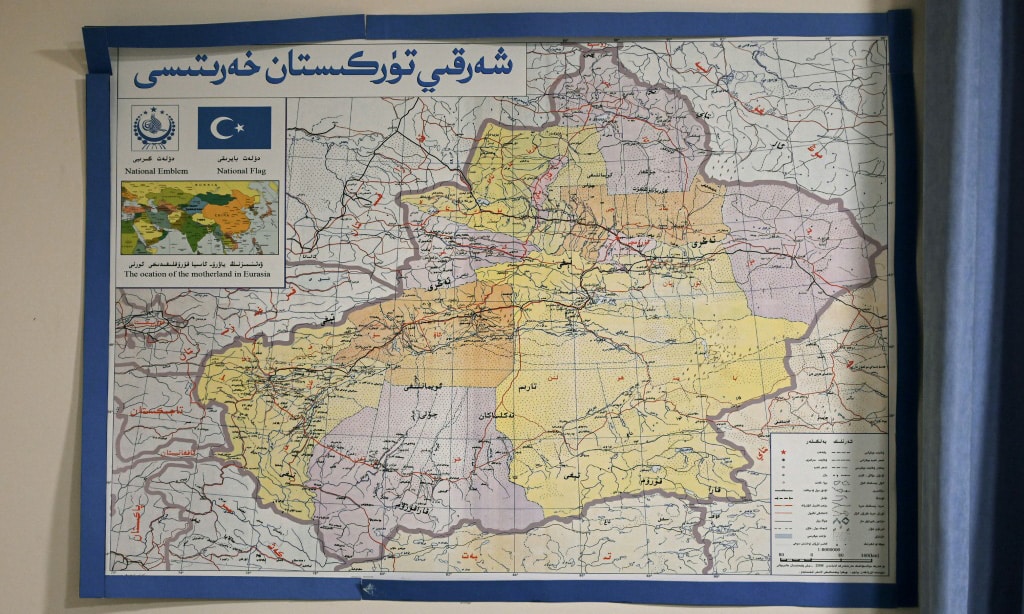 “And then he was gone,” she says, tears streaming down her face.

“I thought he would come back, but he never did.”

No one has heard from him in three years.

Exiled Uighur activists in November released evidence of nearly 500 camps and prisons being used against their ethnic group in China, saying the overall number of inmates could be “far greater” than the one million usually cited.

When news of the camps first emerged in 2017, Beijing initially denied their existence.

Later, it claimed they were “voluntary” vocational centres aimed at combating extremism by teaching people Mandarin and job skills.

But leaked internal documents have shown they are run like prisons, while critics say they are aimed at eradicating local culture and religion of Uighurs and other, mostly Muslim, minorities. 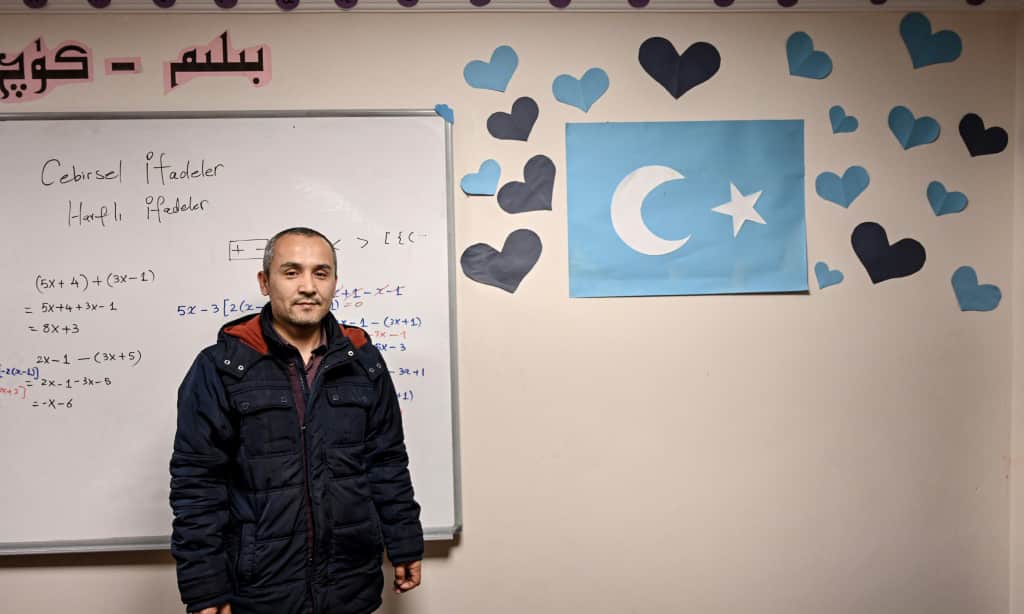 Don’t Worry About Us

With some 50,000 Uighur refugees in Turkey, there are many more children like Fatima or even worse off.

Tursunay, 15, hasn’t seen or spoken to either of her parents since July 2017.

“Don’t worry about us,” they said, in their last phone call on a trip back to China.

They said it was strange their passports had been confiscated but were sure it would be resolved soon.

Tursunay remembers her life in China.

She recalls asking: “Why are they watching us, papa?” when cameras were installed at the entrance to their apartment.

It’s because we are Muslims, her father said.

He burned their collection of religious CDs.

Tursunay has just her little sister now and an older friend they met on the refugee trail who looks after them.

All forms of communication with every family member in China have been cut.

She longs for her parents so much — even just a brief message — that she says she must fight the urge to be angry with them for disappearing.

“I try to stay optimistic and remember that it’s not my parents who have done this to me,” she says.

Many children inside Xinjiang are also reportedly without parents.

Human Rights Watch said in September that Chinese authorities have housed “countless” children whose parents are detained or in exile in state-run child welfare institutions and boarding schools without parental consent or access. 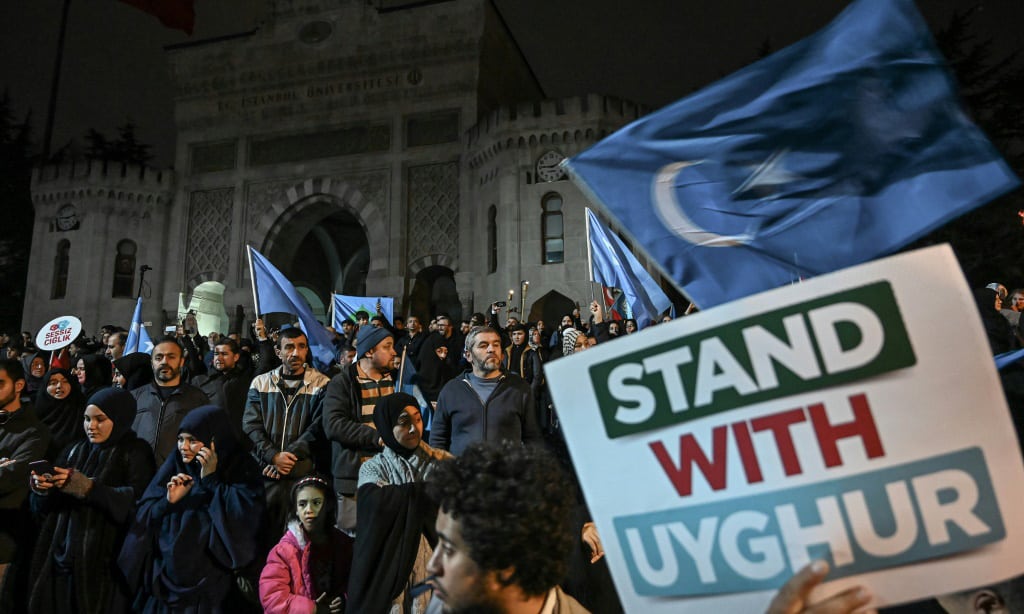 Rallies in support of Uighurs were held in Istanbul recently — many Turks feel historic bonds with the Uighurs, either as fellow Muslims or as part of the same Turkic-speaking ethnic group

Cries of our Brothers

Many Turks feel historic bonds with the Uighurs, either as fellow Muslims or as part of the same Turkic-speaking ethnic group.

Back-to-back rallies were held in December in Istanbul, one by Islamists and another by ultra-nationalists.

“Haven’t the cries of our brothers from East Turkestan reached you?” said Musa Bayoglu during one outside the Chinese consulate, using Uighur activists’ preferred name for their region which is strictly outlawed by China.

“Haven’t the screams of our sisters passed through the walls of your palaces?”

Earlier this year, Turkey’s foreign ministry called China’s crackdown on Uighurs “a great embarrassment for humanity” but since then has been largely silent on the issue.

When Erdogan spoke at the UN General Assembly in September, he reeled off a list of Muslim groups facing persecution, from Palestinians to Myanmar’s Rohingyas. Uighurs were notably absent.

Many fear he is bending to Chinese economic pressure, though Uighurs in Turkey remain hugely grateful for the asylum the country has offered.

“They are providing 50,000 Uighurs a peaceful place to live,” said one Uighur activist in Istanbul.

We will Take it Back

The leaked internal documents detailed how Beijing runs the camps.

They included instructions that inmates should be cut off from the outside world and monitored at all times — including toilet breaks — to prevent escapes.

They also indicated that people should be held for at least a year, and released only after being assessed for “ideological transformation, study and training, and compliance with discipline.”

At the Uighur school in Istanbul, such stories take a toll.

“I still want to listen to the news, but when I hear about it, I feel bad, uneasy; my stomach aches,” says Rufine, 12, who wants to be a teacher or a doctor when she’s older.

Her mother disappeared two years ago when she went back to look after Rufine’s sick grandmother.

Kuseni, the headteacher, laughs when asked what items in the school would be illegal in China.

“Just coming on holiday to a Muslim country like Turkey would be enough to send you to a camp,” he says.

“As for this stuff…,” he points at the East Turkestan flag and the Uighur Arabic script on the wall, and makes a cutting motion across his throat.

“The Uighurs are facing extinction,” adds 39-year-old teacher Mahmut Utfi. “Our culture, our language. I see my job as a duty.”

For Fatima, the repression has only made her more defiant.

Tears still streaming, her voice cracking, she has a fierce message for the Chinese government: “I would tell them: just wait a bit. You think we’re weak, but you’ll see. Our nation, our motherland will survive, you won’t be able to stop it.

“Because they took it from us, we will have to take it back,” she says.