Will there ever be peace for Myanmar’s stateless Rohingya minority?

Compounded by years of international pressure and criticism, it appears that the embattled Burmese state is now opening up to the possibility of mediation with regard to the 2017 Rohingya crisis. Only two years ago, hundreds of thousands of Rohingya refugees fled from Myanmar’s Rakhine State as Burmese military cracked down on hapless Rohingya communities, citing terrorist activities and the need to defend sovereign soil.

With firebrands like Wirathu still spreading hate speech against Muslims, both Bangladesh and Myanmar face a continuing crisis that can no longer be addressed by simply refusing to acknowledge the problem in the first place.

Recently an ASEAN-ERAT team was deployed to Myanmar to assess the current conditions at the Rakhine State, to pave the way for the eventual repatriation of the stateless Rohingya. However, the current clashes between the insurgent Arakan Army and Myanmar security forces have frozen repatriation efforts, and have made it doubly harder to accomplish a lot on the ground. 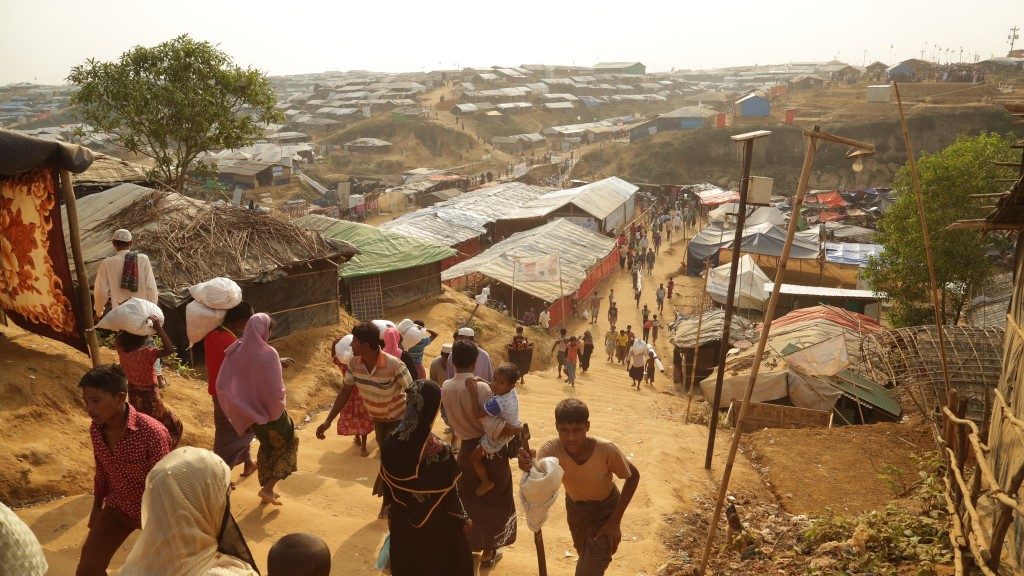 It is becoming a fortunate reality in Myanmar that an increasingly large portion of the public is acknowledging that something has to be done about the problem now, and the previous non-interference stance of the surrounding ASEAN community is no longer helping the crisis.

Rakhine and Kachin states under siege

Diplomatic measures, as well as a closer look on the more practical, domestic dimensions of the crisis are seen as areas where the ASEAN can help Myanmar. According to a combined statement by INGOs operating in Myanmar, including Action Contre La Faim and Relief International, up 95,000 people in the Rakhine State have been cut off from essential and basic services due to the on-going clashes between the Arakan Army and Myanmar’s military.

The northern Kachin State is also suffering from increased military operations, and the government has set negotiations with insurgents on April 30.

According to the Kachin Independence Organization, all the residents want now is peace, and to be able to return to their homes. On the Bangladeshi side, the government’s initial plan to relocate more than 100,000 Rohingyas to the island of Bhasan Char has fallen apart, as international groups insisted that the relocation should be completely voluntary on the part of the Rohingyas. Bangladesh is host to around 1.2 million Rohingyas, and now faces an uncertain political future because of the Myanmar exodus.

Pageants in Asia: A Question of Future Relevance

Should pageants continue in the region, what can it become to become more than just a sounding board for beauty standards?

A 17-year-old New Zealander whose TikTok anthem “Savage Love” has been viewed more than a billion times said Wednesday “it blows his mind” to have now topped the US Billboard singles chart.

The novel coronavirus has affected every single industry, and fashion is not an exception. As major stores close and events are canceled, luxury retailers have not forgotten their corporate responsibilities. Now, they are stepping up to lead the fight against COVID-19.

A brief and rare deployment of Chinese troops in Hong Kong to clean up streets has raised questions about whether Beijing will intervene militarily to end nearly six months of pro-democracy protests.

China: Some Children are Learning to Code Before Even Entering Primary School

Wearing a pair of black-rimmed glasses and a red T-shirt, an eight-year-old Chinese boy is logged in for an online coding lesson – as the teacher.

Thousands of homeless “net cafe refugees” in Japan risk being turfed out onto the streets as the coronavirus pandemic forces the sudden closure of their uniquely Japanese 24/7 comic book havens.

The Most Popular Asian Superstars on TikTok

In the eyes of their fans, the most followed figures on TikTok have gone past beyond celebrity status. These TikTok stars have millions of followers under their belt and many have cemented their fame by creating funny skits, lip-sync videos and duets.

How WeChat Is Dominating Online Life in China

WeChat, or Weixin in China, is being evolved to become Facebook’s biggest rival in providing consumer communication and value-added services via the mobile app.

The Dark Side of Thailand: Part I

Thailand’s ‘legitimate’ flesh trade has paved the way for child prostitution to severely affect the most vulnerable of populations in the country.

Around two dozen green turtles were released back to the wild in Bali on Wednesday after the endangered creatures were rescued from poachers on the Indonesian holiday island.

Under Pressure: Grindr to Sell for $608 Million by Chinese Tech Firm

One of China’s biggest mobile gaming companies is selling popular gay dating app Grindr for $608 million after pressure from US authorities concerned over the potential misuse of user data.

Malaysian radio station BFM 89.9 and advertising agency Fisherman teamed up for #BersatuForMakan, a call to unite for shared love of food, to celebrate National Day and Malaysia Day

Hing: The Umami Ingredient of India is Finally Homegrown

Each country has a staple ingredient that is widely present in its local cuisine. For India, it’s Hing. But despite its common use, the plant isn’t grown locally in any part of the country. Finally, scientists have changed that.

Read this Before Attending Tokyo 2020

Are you an Olympic fan? If so, Tokyo 2020 is not something you’d want to miss. This guide will tell you every single thing you need to know about it from flights, hotel bookings, tickets, and places to explore.

Smartphone vs Virus, is Privacy Always Going to be the Loser?

In Europe, officials, doctors and engineers are looking at how smartphones could be enlisted in the war against the spread of the new coronavirus.

Umami-bomb or toxic allergen? There are perhaps few condiments as controversial as MSG, but most scientists say it’s safe, and now a Japanese firm is trying to give it a reputation overhaul.

Easy-to-remove barcodes and QR codes used to tag everything from T-shirts to car engines may soon be replaced by a tagging system based on DNA and invisible to the naked eye, scientists said Thursday.

Fireworks Explode Across Japan to Cheer up Virus-Weary Public

Dozens of fireworks displays erupted simultaneously across Japan on Monday to cheer up the public, urge the gods to end the coronavirus pandemic and provide practice for struggling pyrotechnic artisans.

Footage of a distressed baby elephant jabbed by bullhooks at a Thai camp to tame it before joining the tourist industry has been released by conservationists in an appeal to end the practice.

Public sentencing is done in front of 10,000 people, and the horrific execution usually follows after the death sentence is issued

Where are all the Google’s Offices in Asia?

Take a Peek inside Google’s Colorful Offices all around Asia

Most Popular Hip-Hop Artists in China

Regardless of interference with the government, these top Hip-Hop Artists from China are here to stay

Japan’s Peanuts Hotel has become one of the must-visit destinations for the fans of the comic. Now in its 2nd year, the hotel brought back its popular pink Snoopy toy which was a hit last year.

In an effort to be more inclusive, Starbucks opened its third sign language store – also the first one in China to cater to the disabled community.

Japan’s Problem With Celibacy and Sexlessness

Japan is on the brink of a national calamity with its declining birth rates that will affect a third of its population by 2060.

Why Coronavirus Could Help Save the Most Trafficked Mammal on Earth

The novel coronavirus outbreak in China may end up saving one of the world’s most trafficked animals after Beijing announced a total ban on the sale and consumption of the pangolin.