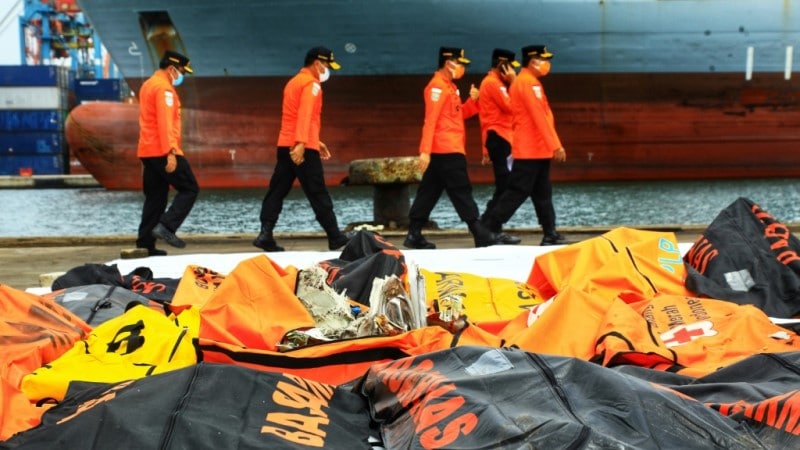 Indonesian pilots had reported multiple problems with an ageing jet’s throttle system before it plunged into the sea after takeoff in January, killing 62 passengers and crew, investigators said Wednesday.

The malfunction in the Sriwijaya Air Boeing 737-500’s engine control system was highlighted in a preliminary report on the January 9 crash, but investigators said it was too early to pinpoint an exact cause.

Divers are still attempting to locate the cockpit voice recorder, which could provide vital clues to what the desperate crew was saying when the flight from Jakarta to Pontianak in Borneo went down.

On Wednesday investigators said they were probing the autothrottle system — and possible human error.

Crews on previous flights had reported that the system was “unserviceable” and it had been repaired several times before the fatal crash, the report said.

“The left (engine throttle) was moving backward too far while the right one was not moving at all — it was stuck,” said National Transportation Safety Committee investigator Nurcahyo Utomo.

“But what would have caused this anomaly? We can’t conclude anything just yet.”

Communications with air traffic control were described as normal up until the moment the plane deviated from its course and crashed.

Despite appeals from air traffic controllers, the crew — including an experienced captain — did not respond to questions about the plane’s change of direction.

But it was still unclear why the crew did not switch off the system and take manual control of the plane.

“The aircraft… had previous known maintenance problems immediately prior to the crash,” said Stephen Wright, professor of aircraft systems at Finland’s Tampere University.

Repeated attempts to fix the system was a red flag and may be a key factor in the crash, he added.

Divers have recovered the plane’s flight data recorder, but were still searching for the cockpit voice recorder (CVR), which tracks flight crew conversations.

“That’s why we need the CVR to see whether there are human factors” involved, he added.

There no indication that the bad weather played a pivotal role in the accident, authorities said, adding that two other commercial planes flew the same route without incident just before and after the plane.