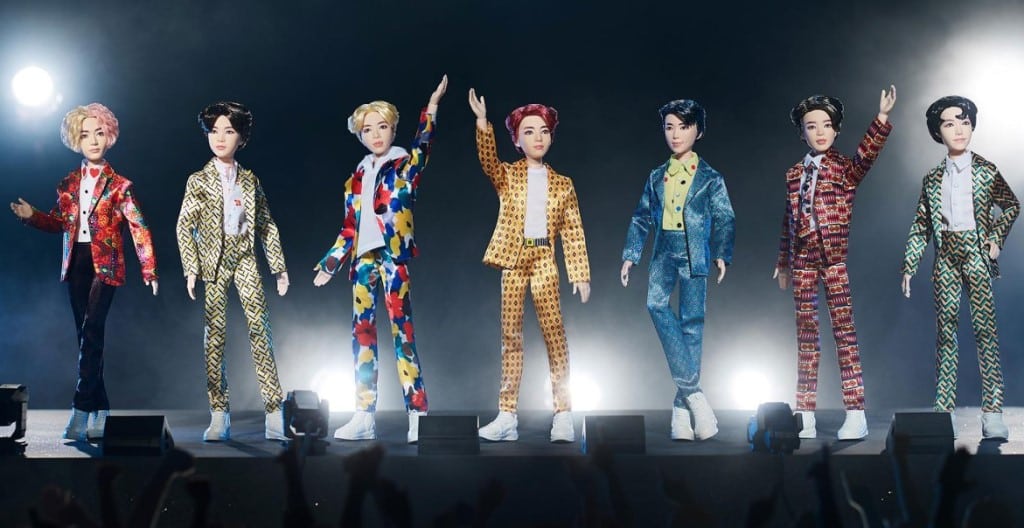 When you think of Barbie, the first image that pops into your head may be Western-looking dolls. Looks like Mattel recently got a makeover as it released dolls of K-pop stars which increased their sales worldwide.
Mattel recently had a surprise increase in its revenue this year after it launched dolls based on the Korean pop group BTS. The boyband has taken over the charts locally and internationally for more than a year.

The sales of the company went up 10% to a whopping $721.7 million in this year’s third quarter.

The boost in sales was surprising considering analysts expected a 1.2% sales drop due to the recent release of Frozen 2 dolls, which are owned by Hasbro Inc. Meanwhile, Hasbro missed their profit estimates and put the blame on tariff uncertainty, and the rising cost of shipping and warehousing.

The Mattel BTS dolls were launched in Singapore in mid-August. It can be bought in different Toys “R” Us branches and website, popular bookstores, stores in Changi Airport, OG, and Takashimaya, among others. Each doll is priced at $34.99, and the full set which features all the BTS members – Jungkook, V, Jimin, Suga, Jin, RM, and J-Hope, costs $244.93.

The Korean Boyband is now taking the world by storm. They even made it to the cover of Time Magazine. With international collaborations with Facebook, and Puma under their belt, there’s truly no stopping these Korean idols. You can even get limited edition Coca Cola bottles dedicated to the band members.

“BTS is a pop-culture music phenomenon that transcends age, culture, and language, and through this partnership, Mattel will offer a new way for millions across the world to engage with the band,” shared Matter SVP & global brand GM Sejal Shah Miller.

Spend the holidays with the ones you love: BTS. Get your #BTS by Mattel doll today! #BTSxMattel #BTSDollsOfficial Shop now: https://t.co/KdjXOb27Yp pic.twitter.com/PRIp7uQG54

Miller added that partnering with established franchises that already have global appeal is one of their strategies. Given Mattel’s creative expertise, the company is ideal to create the dolls which celebrate the Korean pop sensation.

According to Mattel, the dolls look like the 7 members of the boyband. The dolls are intricately made, and even have rooted hair. Fans can also move the dolls based on their real-life dance moves and stances, thanks to its 11 points of articulation.

Unlike its top competitor Hasbro, the company does not see cancellations by its retailers in time for the December 15 US tariff deadline on toy imports from China. Kreiz confirmed that they are not seeing impacts from tariffs and they don’t expect anything until the end of the year.

This comes as great news for fans who want to purchase the dolls inspired by their idols just in time for the Holidays.

Currently, Mattel is at 20 cents per share. This shows a significant difference compared to its previous 2 cents per share value. This increase was also aided by the drop in provision for income taxes.

Additionally, Mattel also got 26 cents per share, which is still higher than the 16 cents per share value which was initially expected by analysts. According to Mattel’s CEO, the company was able to capture the cultural trend spearheaded by BTS and commercialized it.

Now, the quarterly net sales of matter increased 3% to $1.48 billion compared to a year earlier, despite the predictions of a 0.5% decrease.

This is not the first foray of Mattel into creating dolls that are inspired by real-life role models. Last year, the company introduced a doll line series that featured women who significantly made contributions in their respective fields and society. Some of the women honored by this limited doll release are Patty Jenkins, Chloe Kim, Nicola Adams, Bindi Irwin, and Xiaotong Guan.