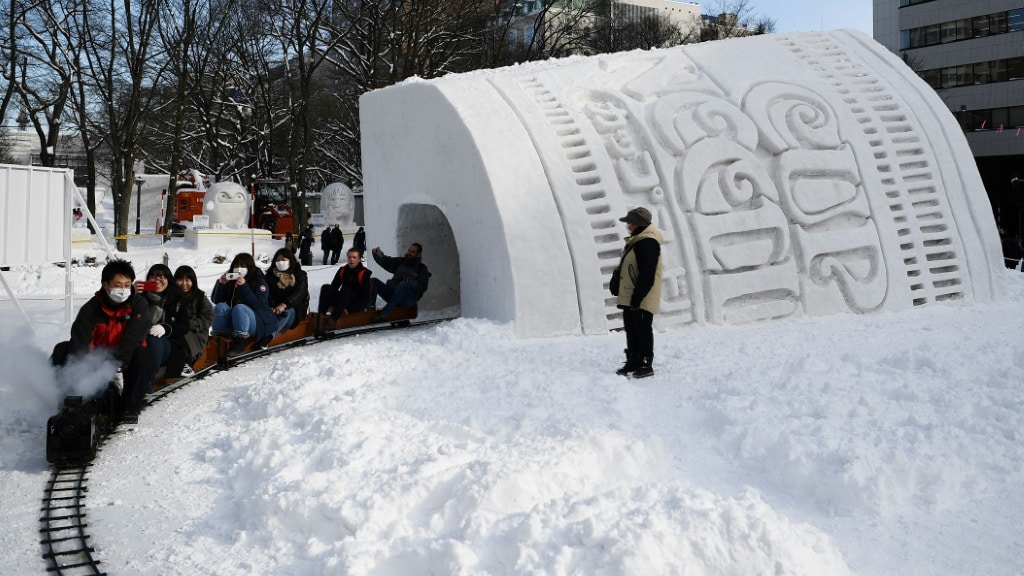 Noodle doodle railway train: there are all kinds of inventive attractions at the festival

Every year, tens of thousands of tourists flock to the snow festival in the northern Japanese city of Sapporo, attracted by some 200 large, but intricate ice sculptures.

But this year, there’s a problem: no snow.

With high temperatures that festival-goers put down to climate change, organizers were forced to truck in powder from distant towns for their signature sculptures in an unheard-of ice crisis.

“This lack of snow is unprecedented,” said Yumato Sato, an official in charge of organizing the snow festival, which normally uses 30,000 tons of the stuff for sculptures ranging from anime characters to famous racehorses. 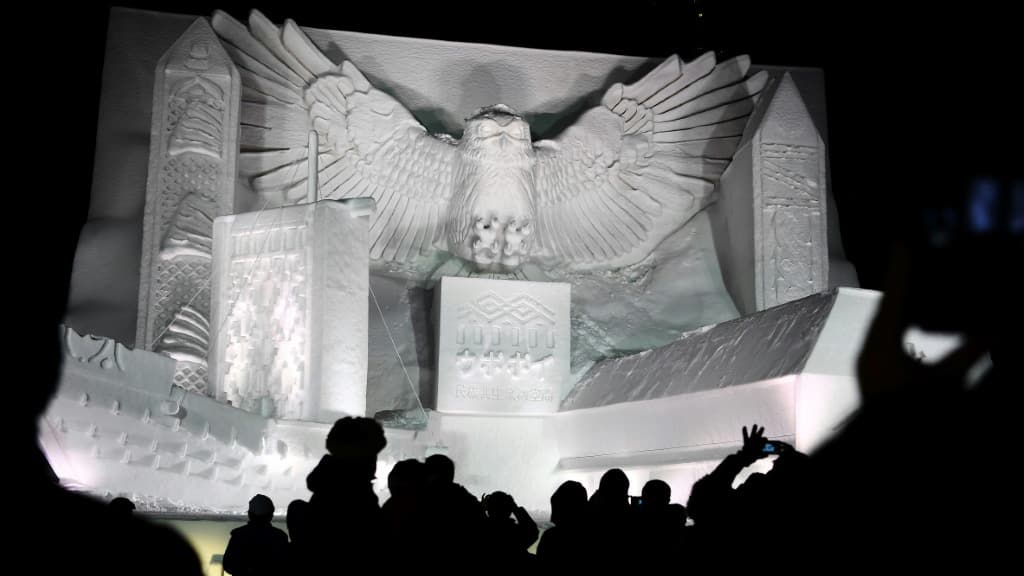 “We had to bring in snow from places we had never reached out to before” such as Niseko, a town about 60 kilometers (40 miles) away from Sapporo famous for its skiing, he said.

Adding to the problem was the need for pristine snow, perfect for sculpting.

“The snow needs to be free of dirt, otherwise the sculptures can break up,” he said.

“We barely managed to scrape together enough snow.”

Record low snowfall in Japan this year has also forced many ski resorts to shut their pistes. According to Weathernews, one quarter of the 400 resorts surveyed had been unable to operate.

There has been a knock-on effect on one of the snow festival’s main attractions — a 100-meter-long, 10-meter-high slide — that had to be reduced in size. 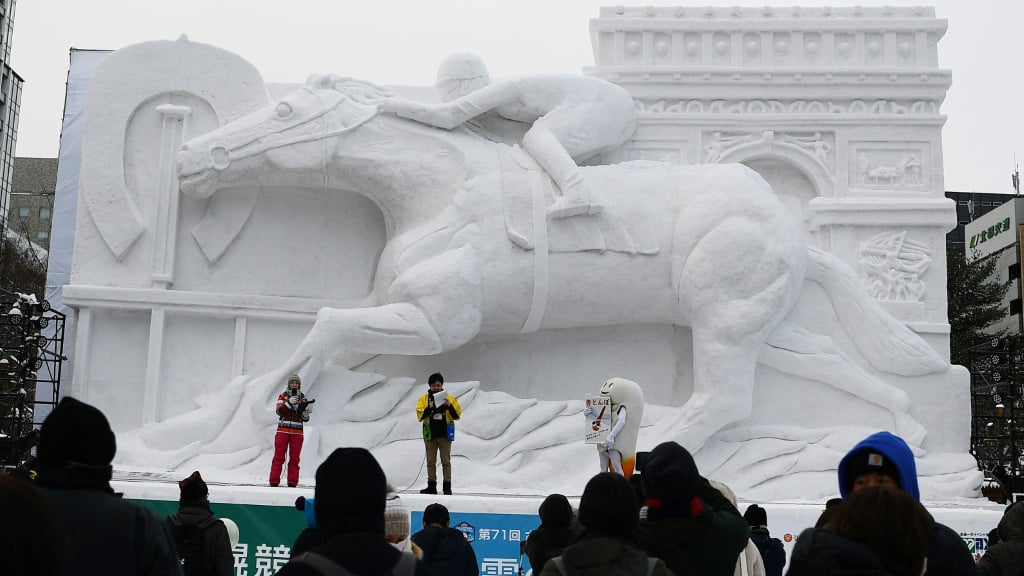 A lack of snow and warming temperatures have made Sapporo’s snow festival tricky this year, but it has still produced some fantastic sculptures

Once Before I Die

Snowfall in Sapporo has been less than half the annual average, according to the Japan Meterological Agency’s local observatory. High temperatures melted the snow in mid-December and the mercury is expected to stay above average.

This posed a major challenge for the 125 local Self-Defense Forces troops who painstakingly construct the sculptures each year that can be as high as 15 meters, according to commanding officer Colonel Minoru Suzuki.

“Due to record warm weather this year, we didn’t have much snow and the snow contained more water which made the statues melt easily,” Suzuki told AFP.

His troops spent about 100 days planning and building a 15-meter tall, 20-meter wide statue modeled on the palace at Lazienki Park in Warsaw to commemorate the 100th anniversary of Japanese-Polish diplomatic relations in 2019. 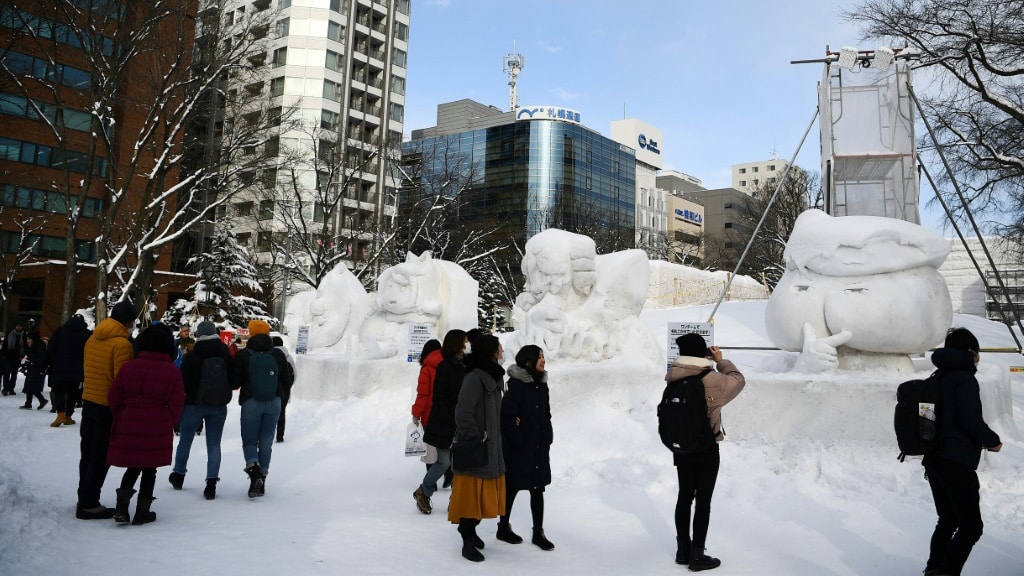 “We had to keep repairing the statue so we struggled. It was difficult to attach parts because it was so warm,” he added.

The festival has been running for 70 years and is a major tourist magnet, drawing 2.7 million visitors last year.

Sunao Kinoshita, a 75-year-old who had traveled up from near Osaka, said he “had to see it once before I die”.

“Northern Japanese cities have been hosting snow festivals every year. It would be a shame if such events ended” due to global warming, he said.

A regular festival-goer from the region also laid the blame on global warming. “I was worried the climate was different this year,” Ayaka Muto, 31, told AFP. 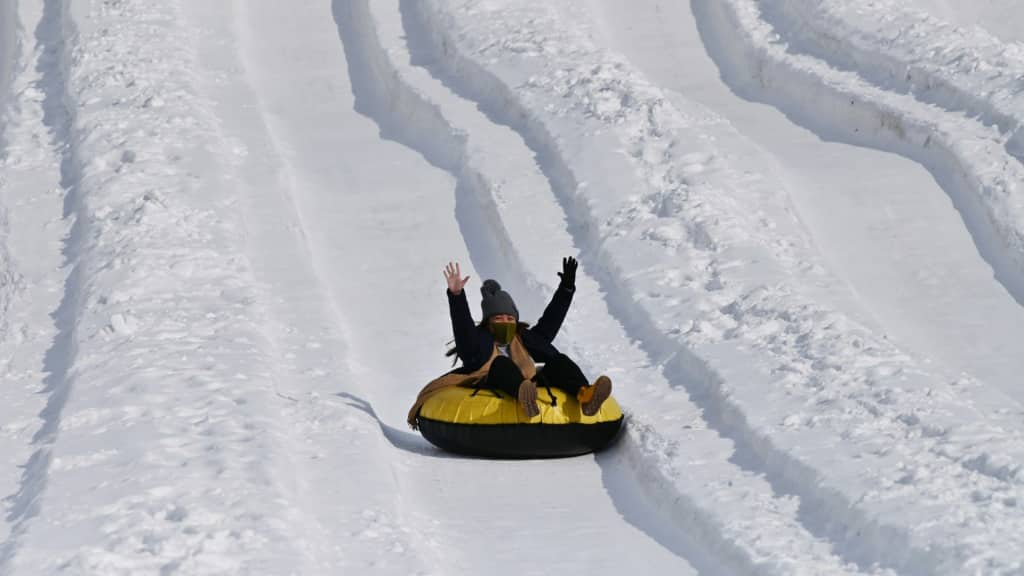 The snow slide is one of the main attractions

Serious and a Disaster

The main theme of this year’s festival, which runs until February 11, is the ethnic Ainu minority in Hokkaido, as the first Ainu-themed national museum, nicknamed Upopoy or “singing together” in the Ainu language, will open in April.

“We’ve never before had statues with such powerful Ainu characteristics,” Sato said.

One statue featured a giant Blakiston’s fish owl spreading its wings watching over sculptures of the museum and a ship. The owl is considered a god in Ainu culture.

Another statue was based on the Ainu myth of a thunder god and a forest princess.

And some have been turning to the nature gods of Japan’s native Shinto religion to pray for more snow.

In mid-January, a ski resort in western Hyogo prefecture invited a Shinto priest to hold a ceremony to ask the gods for snow, as did the organizers of the Yamagata snow festival in northern Japan.

“It’s not that we don’t have enough snow. We don’t have snow at all. It’s serious and it’s a disaster,” Hyogo Governor Toshizo Ido told reporters last month.

The Sapporo festival organizers hope they can continue the famed event in the future despite the warming climate.

“This year marked the 71st event. It’s a festival that we want to carry on for future generations,” Sato said.

“(But) this is about weather so all we can do is to pray.”