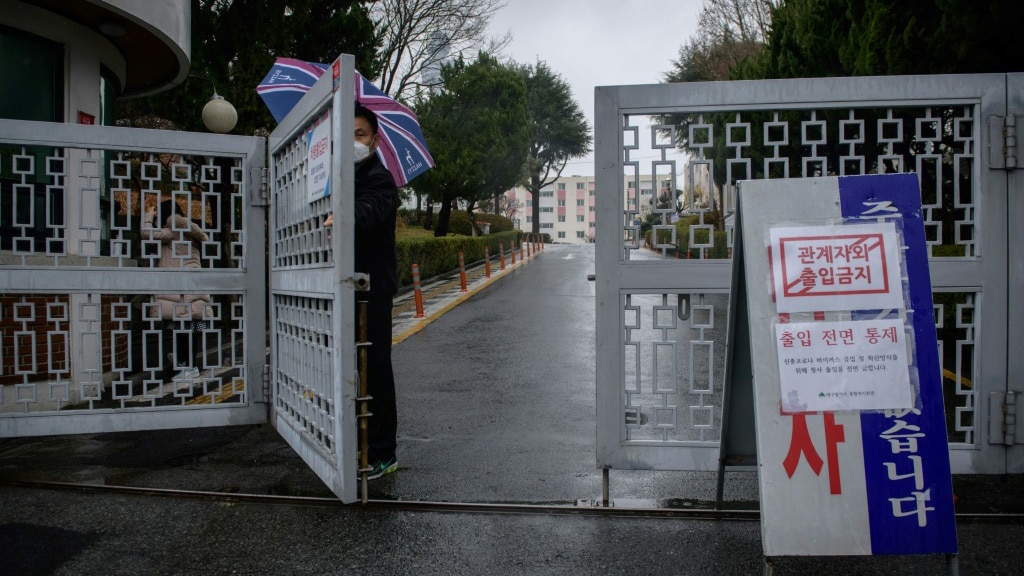 A security guard stands at the entrance to an apartment complex reserved for young, poor women, which has seen nearly a third of its 142 residents test positive for the coronavirus, in Daegu

Behind a closed metal gate and a sign barring entry to outsiders, dozens of religious sect members are quarantined in a social housing complex in Daegu, the epicenter of South Korea’s coronavirus outbreak.

Painted in faded pastel tones and reserved for young, poor women, the development has seen nearly a third of its 142 residents test positive for the virus.

Each patient is a member of the Shincheonji Church of Jesus, a secretive religious group linked to most of the South’s cases.

Shincheonji members make up around two-thirds of the total inhabitants, city authorities say, but for a time quarantine was imposed on everyone there, regardless of status or affiliation.

That made the concrete five-story buildings the only ones in the South to have been entirely restricted.

The coronavirus patients from the “Hanmaeum” complex have been moved to medical facilities but 30 people — all but three of them Shincheonji members — remain in isolation in their apartments.

“It has been weeks now with no clear end in sight, though I have tested negative for the virus,” said one. “I wake up in the morning and spend hours reading books and studying.”

The woman — who did not want to be identified for fear of social stigmatization — said she accepted the authorities’ decision and the residents needed to co-operate, but the conditions were stressful.

“It is even difficult to open my windows now because of drones flown by reporters to take photos.

“I wish there was clearer official information on when this will be over.”

Shincheonji was founded in 1984 by Lee Man-hee, who it refers to as the “Promised Pastor” and says has taken on the mantle of Jesus Christ.

He will usher in the Day of Judgement during his lifetime, it says — he is now 88 — and take 144,000 people with him to heaven, although the church currently has many more members than places available.

The woman living at the complex — the name of which means “One Mind” — said she was born into a Protestant family but “grew disenchanted with Church teachings” as an adult.

“Then I found Shincheonji,” she said. “I pray for about one hour on average a day. I pray at every meal and when I feel distressed. It’s about an hour altogether.”

Shincheonji is often accused of being a cult and has faced intense public criticism over South Korea coronavirus outbreak, one of the largest in the world.

More than 60 percent of the country’s 7,869 cases are linked to the group, most of whose members are women and many are in their 20s and 30s.

Officials say that has been a key factor in the South’s low death rate from the virus, at 0.84 percent, far below the WHO’s global average — the virus is much deadlier among older generations, particularly men.

The sect employs aggressive recruitment tactics, said former member Kim Jong-chol, who spent more than 10 years proselytizing before disavowing it in it 2013.

“Recruiters target young people because they are socially vulnerable with low self-esteem as they find it increasingly difficult to find jobs after college graduation,” he said.

“With a mounting sense of insecurity, many find it all but impossible to avoid falling victims to a con job.”

Instead of revealing their identity, at first they encourage potential members to attend six months of disguised “psychotherapy sessions” before announcing their true purpose, by which time their new convert is “hooked”.

Once recruited they are encouraged to “break ties” with their families and live in close proximity to other Shincheonji members, he added.

“The Hanmaeum cluster is a classic example of that.”

Shincheonji denies it pushes young recruits to desert their families, calling such decisions the personal choices of adults.

“We have no reasons whatsoever to encourage such breakups,” said Shincheonji representative Kim Young-eun.

And the woman at the complex said she maintained a good relationship with her family. “Media pursue provocative stories on Shincheonji without cross-examination of facts,” she said.