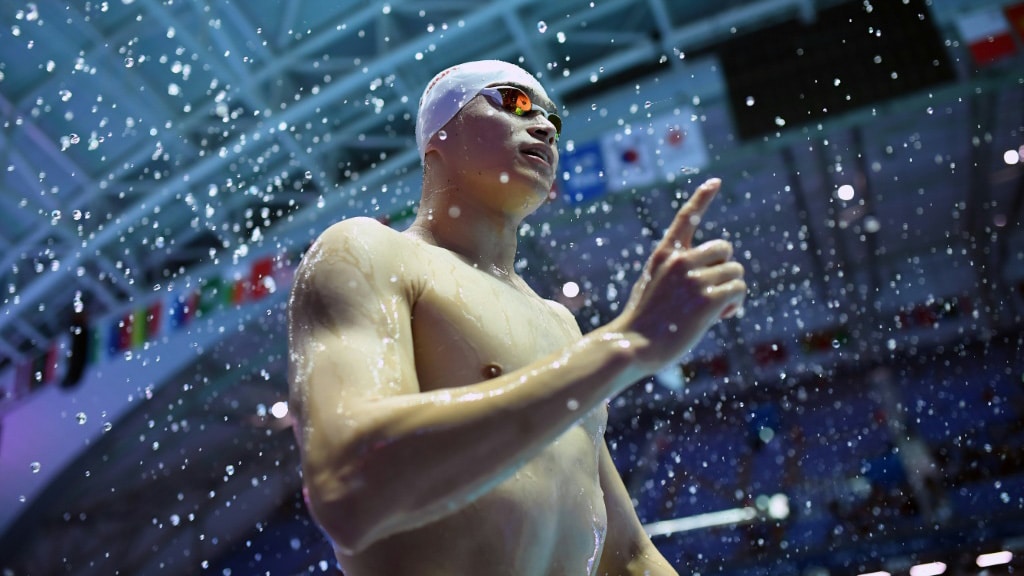 The three-time Olympic freestyle champion, 28, is universally popular in China despite a string of missteps including serving a drugs ban in 2014.

But Friday’s ruling by the Court of Arbitration for Sport — after a vial containing a blood sample was smashed with a hammer at his home — threatens to be the decisive chapter in Sun’s colorful career. He has vowed to appeal to the Swiss federal court.

The only child of an athletic family, Sun announced himself to the wider public at the world championships in Shanghai in 2011. Aged 19, he shattered Grant Hackett’s long-standing 1500m freestyle world record and also won the 800m.

He grabbed two more golds at the London 2012 Olympics, again setting a new mark in the 1500m — a record that still stands.

But then came the first in a long list of flashpoints. In 2013, Sun fell out with long-time coach Zhu Zhigen after a row over the swimmer’s romantic ties with a flight attendant.

Sun refused to train after Zhu ordered him to end the relationship. Chinese swimming officials attempted to mediate but the damage was done and Sun split with Zhu after 10 years under his tutelage.

Months later, Sun, driving without a license, slammed a borrowed Porsche SUV into a bus in his home city of Hangzhou, near Shanghai. He spent seven days in police detention and later vowed to mend his ways.

At the 2014 Asian Games in Incheon, Sun was at the center of controversy again, describing the national anthem of Japan, China’s arch-rivals, as “ugly” after losing to Kosuke Hagino in the 200m freestyle.

In November 2014 came the bombshell announcement that Sun had served a three-month suspension earlier that year for taking a banned stimulant. He has always maintained it was prescribed medicine for a heart condition. 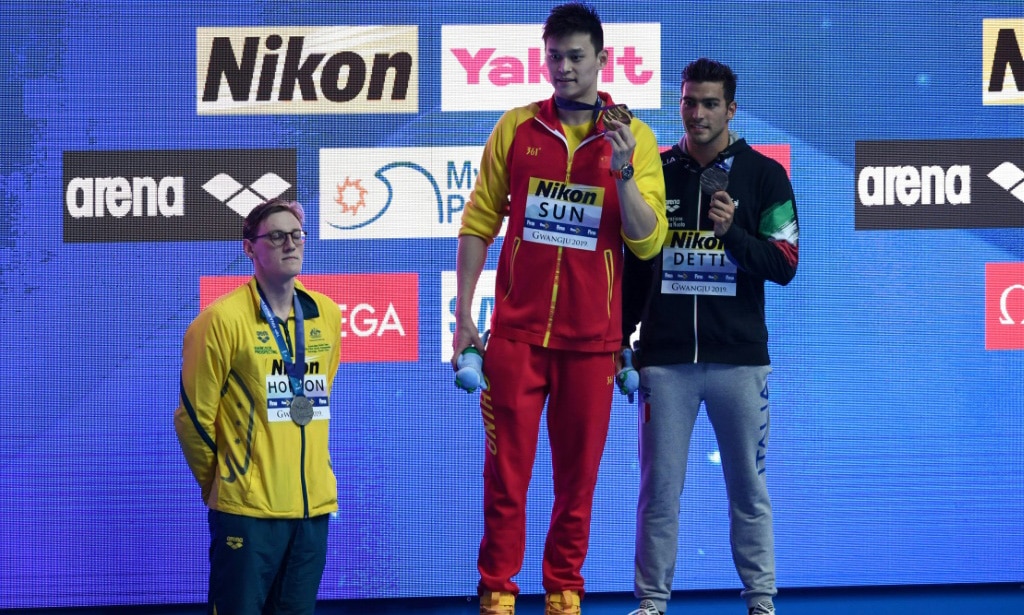 But the die was cast and Sun’s presence sparked rancor at the 2016 Rio Olympics, where Australian rival Mack Horton blasted the Chinese as a “drug cheat” before pipping him to gold in the 400m freestyle.

The usually steely Sun broke down in tears.

He hit back to win the 200m, but not before French swimmer Camille Lacourt caused another storm by declaring, in a nod to the drugs ban: “Sun Yang pisses purple.”

Sun’s Olympic haul stands at three gold medals, two silvers and one freestyle relay bronze, and he was expected to lead China’s charge in the pool once more at this summer’s Tokyo Games.

He won two titles at Gwangju, South Korea last summer, taking his total tally of world championship golds to 11, but it was another stormy meet.

FINA allowed him to compete despite the possibility of a second drugs ban over the incident at his home in September 2018, when he clashed with testers and a vial of his blood was smashed with a hammer.

Horton refused to pose for pictures with Sun on the medal podium, a protest repeated by Britain’s Duncan Scott.

That enraged Sun, who shouted “I win, you loser” at Scott, in angry scenes rarely seen in swimming.

“I shouldn’t have to put up with these kinds of insults,” Sun said in Gwangju.

“But I have a big heart. There are millions of athletes in the world and if a few want to hurl insults, I can take it.”

Despite his antics and doping controversies Sun is revered in China because of his success in the pool and perceived good looks.

Even in international competition he is always followed by a screaming band of patriotic and mostly female Chinese fans decked out in national colors.

CCTV, the state broadcaster, branded Horton “a clown” during the Gwangju championships and Sun’s fans posted death threats on the Australian’s Instagram. 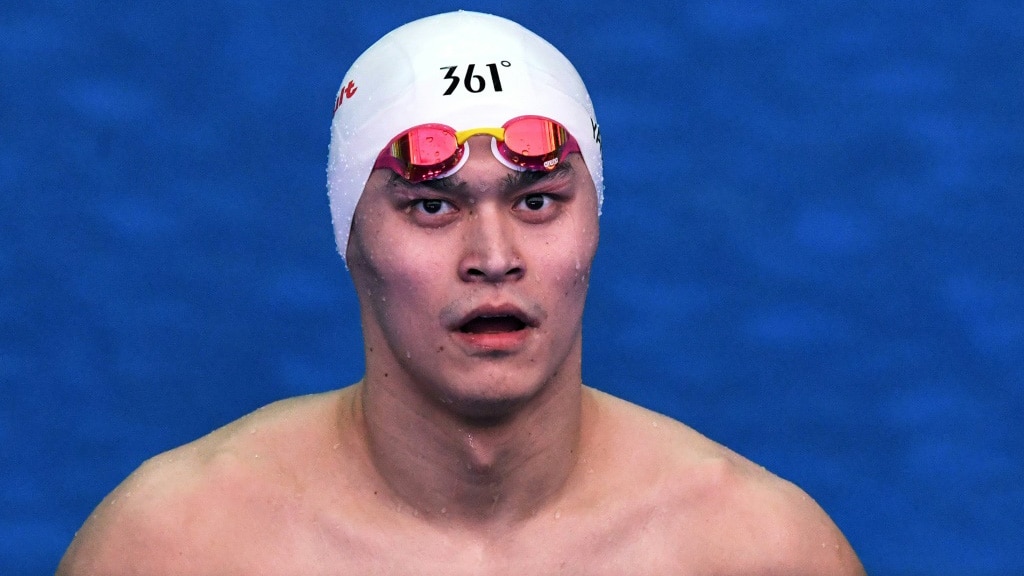 Chinese Olympic champion Sun Yang was banned for eight years on Friday for refusing to cooperate with drug-testers.

Sun wins his first major medal at the age of 17, taking 1500m freestyle bronze at the world championships in Rome.

The rising star wins gold in the 1500m and 4x200m freestyle relay at the Asian Games in Guangzhou.

Sun shatters Grant Hackett’s 10-year-old 1500m world record and also wins the 800m in front of his home crowd at the world championships in Shanghai.

Sun is edged into silver in the 200m freestyle at the London Games, but strikes gold in the 400m and 1500m.

Sun wins triple gold at the Asian Games in Incheon, but it later emerges that he served a three-month suspension for taking the banned stimulant trimetazidine.

Australian rival Mack Horton brands Sun “a drug cheat” at the Rio Olympics and pips the Chinese to gold in the 400m freestyle, leaving him in tears. Sun recovers to win the 200m title.

Sun’s career is thrown into doubt after The Sunday Times in Britain alleges that a vial of his blood was smashed with a hammer during a dispute with anti-doping testers who visited his home.

Horton refuses to pose for pictures with Sun on the medal podium, a protest repeated by Britain’s bronze medalist Duncan Scott. Sun tells Scott: “I win, you loser.”

Sun is banned for eight years by the Court of Arbitration for Sport for refusing to give blood and urine samples to testers.