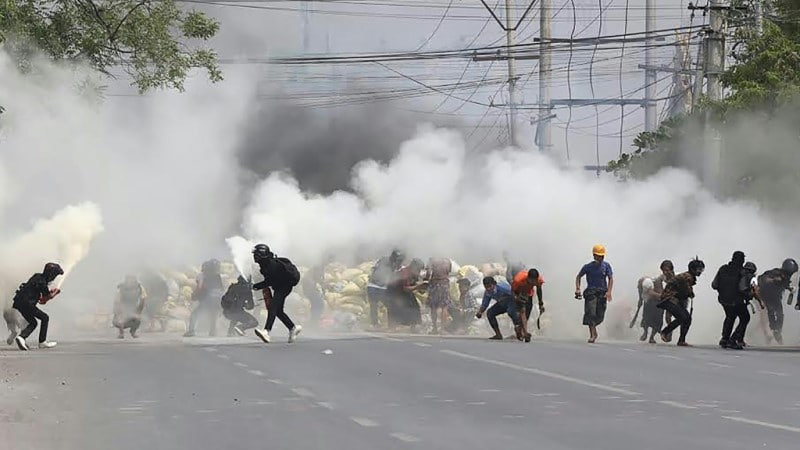 Taiwan on Monday advised its companies in Myanmar to fly the island’s flag to distinguish themselves from Chinese businesses, which came under attack over the weekend amid a bloody crackdown on pro-democracy protests in Yangon.

Several Chinese-owned factories were torched in a textile-producing district of Yangon on Sunday, when Myanmar saw its deadliest day of protest against the military since the February 1 putsch.

The attack on the Chinese factories has rattled Taiwan, whose businesses have previously been mistakenly targeted during bouts of anti-Chinese sentiment in Southeast Asia.

Taiwan’s de facto embassy in Myanmar advised companies “to label themselves as ‘Taiwanese business’ in Myanmar language, to fly our national flag and explain to local employees and nearby residents that they are Taiwanese factories to avoid confusions and misjudgement”.

Public anger towards China has soared in Myanmar, as many in the pro-democracy movement believe China has sided with the army.

China initially pushed back against international outcry over the coup, calling it interference in the country’s “internal affairs”, though more recently it agreed to a United Nations Security Council resolution which “strongly condemns the use of violence against peaceful protesters”.

Taiwan, a self-ruled democratic island, vocally condemned the coup from early on, as well as the junta’s “successive abuse of lethal force against peaceful protesters“.

On Monday, Taipei’s foreign ministry said ten Taiwanese citizens were temporarily trapped during the unrest on the outskirts of Yangon, while some property was damaged when their factory in the district was attacked.

The group is currently safe and has remained inside the factory to wait for the situation to stabilise, the ministry said in a statement.

Beijing’s embassy in Myanmar issued a statement condemning the actions of “destroyers” and urging police to “guarantee the security” of Chinese businesses.

Around 270 Taiwanese companies operate in Myanmar with an estimated total investment of over $1 billion, including banks, textile and shoe factories.