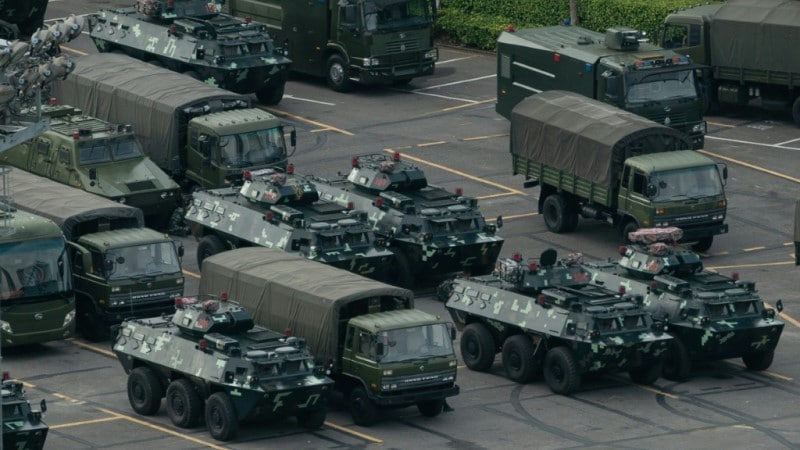 Trucks and armored personnel carriers parked at Shenzhen Bay stadium in Shenzhen on August 16, 2019. The maneuvers in Shenzhen came during massive protests across the border in Hong Kong

Relatives of Lee Meng-chu had said he went missing after crossing from Hong Kong into Shenzhen on August 19, 2019.

Hong Kong was then in the throes of months-long mass demonstrations against a law allowing extradition to China, the territory’s government and the central government in Beijing.

At the time, thousands of Chinese military police had gathered in a stadium in Shenzhen for exercises with armoured vehicles.

The maneuvers had fueled speculation that China was going to deploy its forces to intervene in the Hong Kong unrest.

“I took my phone to record some videos,” Lee said in the CCTV state television report on Sunday, interspersed with scenes from his alleged actions.

“I am sorry. I have done a lot of bad things,” said Lee, his hair cropped short, wearing a blue shirt and an orange vest with his prisoner number.

According to CCTV, he went to Shenzhen for the sole purpose of observing the maneuvers.

He reportedly shot 16 videos and took 48 photos around the stadium. After he shared some on the internet, he was reportedly arrested by state security.

The Chinese government has accused Taiwanese authorities and activists in recent months of supporting anti-government protesters in Hong Kong.