Tragedy: Multiple Elephants Died After Trying to Save Baby Calf

Six wild elephants drowned after slipping off a waterfall in northeast Thailand, authorities said Saturday, with two others saved after they became stranded while apparently trying to rescue one of those that fell into the current.

Officials in the northeastern Khao Yai national park were alerted to elephants “crying” for help at 3am, the Thai Department of National Parks, Wildlife and Plant Conservation said in a statement.

Two of the elephants had apparently attempted to save one of those that fell, but they found themselves trapped on a thin, slippery sliver of rock above the churning waters.

Video showed another of the hulking animals struggling desperately to get back up to where the pair stood.

This photo, taken on Saturday, shows a dead elephant at the bottom of the waterfall.  ©AFP

Park officials tossed food laced with nutritional supplements in an attempt to boost their energy and give them the strength to climb back up into the forest.

They later said the two had been rescued but were extremely distressed.

Parks department spokesperson Sompoch Maneerat said it was unclear what caused the accident.

“No one knows for sure the real cause of why they fell, but there was heavy rain there last night,” he told AFP.

The waterfall was closed to tourists as the rescue took place.

Elephants are Thailand’s national animal and live in the wild in parts of the country, but their numbers have dwindled to only a few thousand.

Deforestation has pushed the wild population into closer contact with humans in recent decades and away from their natural habitats.

Five more dead elephants have been found at the bottom of a Thai waterfall known as “Hell’s Abyss”, the environment minister said Wednesday, as rangers reinforced barriers to try to stop the creatures wandering into the dangerous area.

Drones were used to make the latest grim discovery at the waterfall in Khao Yai National Park, bringing the number of elephants who fell to their deaths in the disaster to 11 after six bodies were found over the weekend.

Elephants are known to develop strong social bonds and officials believe a younger one slipped off the cliff, prompting a doomed attempt by the others to reach it.

Safety measures are being beefed up at the park around 120 kilometres (70 miles) northeast of Bangkok, where officials are helping create more water and food sources nearby to discourage other elephants from returning to the deadly spot.

“I have instructed them to reinforce the fences and barricades that they currently have,” natural resources and environment minister Varawut Silpa-archa told AFP.

Elephants are Thailand’s national animal but numbers in the wild have dwindled to only a few thousand due to deforestation and habitat loss.

“They follow their leaders, and sometimes when the young ones fall, it is only natural that the elder ones will try and reach down and help,” Varawut said.

Thailand was hit by drought this year and the elephants may have been looking for new sources of drinking water, but it is also possible they were trying to avoid contact with humans.

Only two survived who did not fall, but found themselves trapped on a thin, slippery sliver of rock above the churning waters.

Rescuers tossed food laced with nutritional supplements in an attempt to boost the animals’ energy and give them the strength to climb back up into the forest.

Varawut said the pair was “alive and kicking” and on the road to recovery.

Authorities are also faced with the challenging process of recovering the heavy bodies.

For now the Department of National Parks has installed a net to catch the carcasses when the current pushes them downstream. 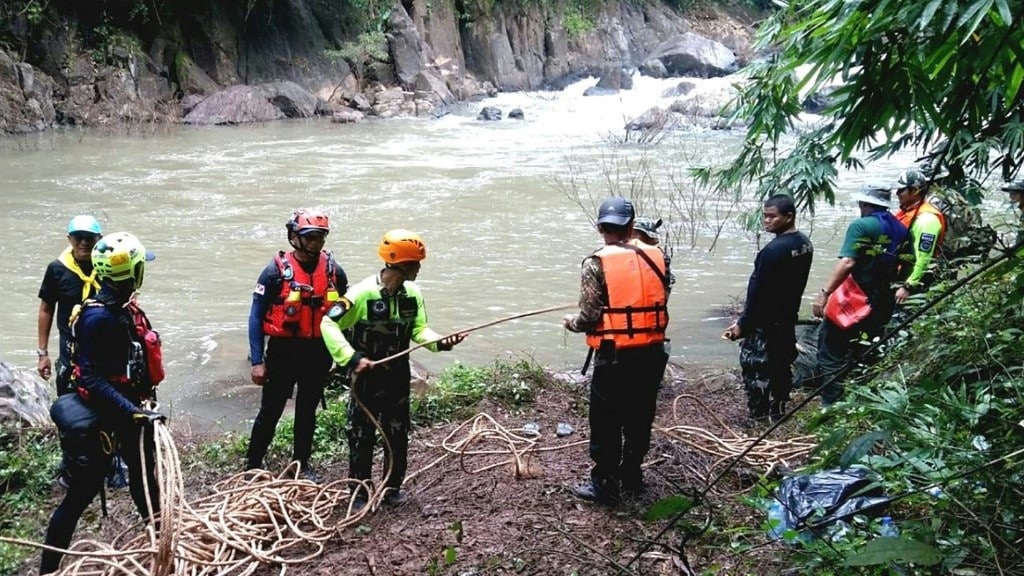