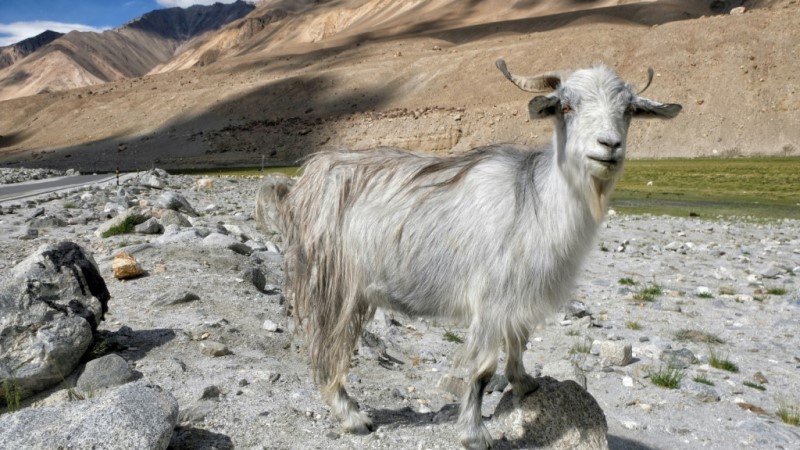 Wool from pashmina goats, reared by nomads in Ladakh, is the most expensive and coveted cashmere in the world

The world is heading for a shortage of the highly prized and super-soft cashmere wool as pashmina goats that live on the “roof of the world” become caught up in the fractious border dispute between nuclear neighbors India and China.

Wool from pashmina goats, reared by nomads in the inhospitable high-altitude cold desert region of Ladakh, is the most expensive and coveted cashmere in the world.

But the shaggy creatures that provide the yarn are being pushed out of their grazing lands in the tussle between the world’s two most-populous nations, causing the death of tens of thousands of kids this season, locals and officials said.

“In about three years when the newborn goats would have started yielding pashmina we’ll see a significant drop in production,” Sonam Tsering of the All Changtang Pashmina Growers Cooperative Marketing Society told AFP. 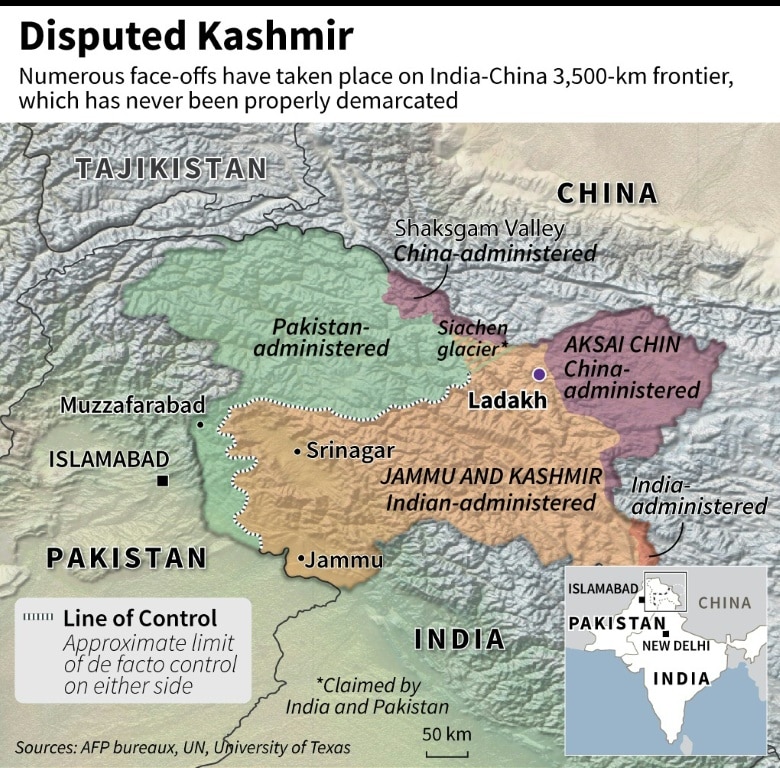 Map of disputed Kashmir showing the areas administered by Pakistan, India and China.

There have been numerous face-offs and brawls between Chinese and Indian soldiers over their 3,500-kilometer (2,200-mile) frontier, which has never been properly demarcated.

The latest is concentrated in the Ladakh region, just opposite Tibet, with Indian officials claiming Chinese troops encroached over the boundary in recent weeks.

The alleged movements came after military fisticuffs at the eastern part of the border near Sikkim in May. 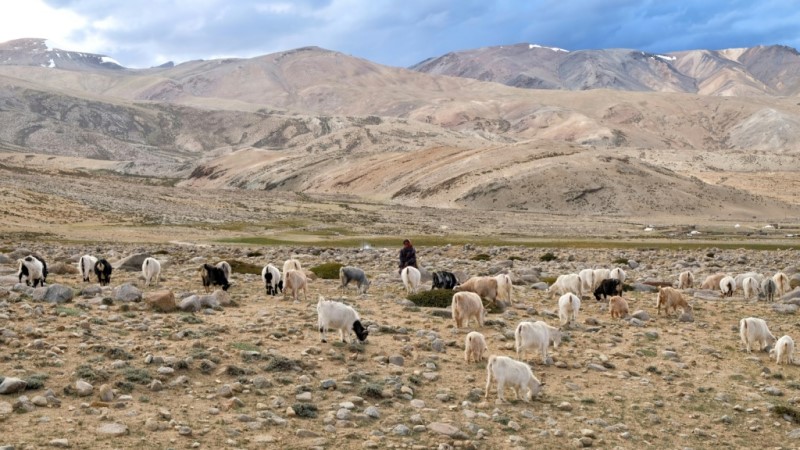 Some traditional grazing land is lost to China each year, Tsering said.

But this year, even the main winter grazing areas near KakJung, Tum Tselay, Chumar, Damchok and Korzok are out of bounds amid the heightened tensions, he added.

“It’s devastating. The PLA (China’s People’s Liberation Army) used to encroach into our side by the meters, but this time they have come inside several kilometers,” said Jurmet, a former elected official who has only one name.

“It was breeding season for the goats. Around 85 percent of their newborns died this year because large herds were pushed out into the cold from the grazing lands (in February),” he told AFP over the phone from Leh, the region’s capital city.

Tsering said Indian soldiers were blocking the animals from entering areas deemed as sensitive, while herders told him the Chinese army was pushing Tibetan nomads into their grazing areas.

Half a dozen residents involved with goat herding who AFP spoke to said that until a few years ago, they would cross over the frozen Indus river for grazing during the winter, but those areas were now being encroached by China.

Meanwhile, communicating with the herders — whose satellite phones provided by Indian officials have been withdrawn in recent years — has become difficult, said Jurmet. 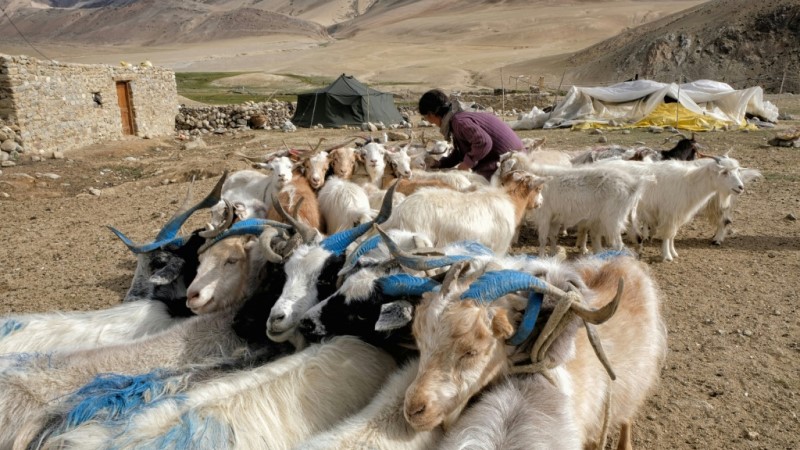 The military tensions are the latest blow for the herders, who are already reeling from the impact of climate change

The huge number of deaths — in the tens of thousands according to a local Indian official who spoke to AFP on condition of anonymity — could devastate the sector in the coming years.

The goats yield some 50 tons of the finest and most expensive feather-light cashmere wool each year, supporting the vital handicrafts industry in Kashmir that employs thousands of people.

Most of the wool is woven into yarn and exquisite shawls sold the world over from luxury store Harrods in London to the Dubai Mall in the United Arab Emirates, and can cost up to US$800 for one scarf. 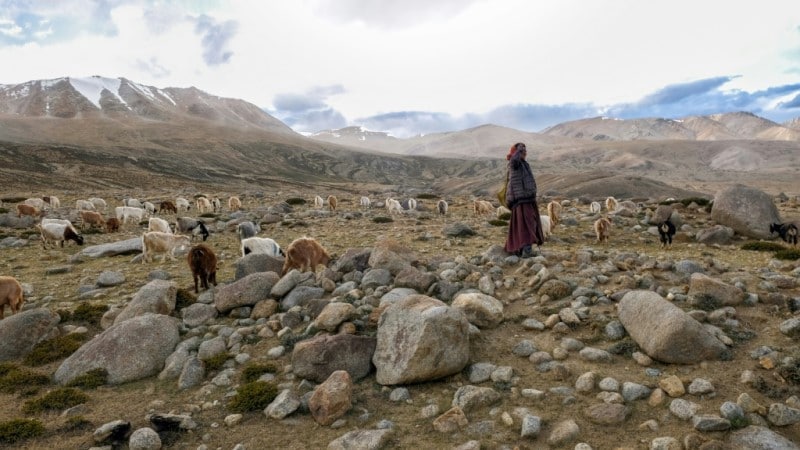 More than 1,000 families of nomadic Changpa herders roam the vast Changtang plateau at over 5,000 meters (16,400 feet), grazing some 300,000 Pashmina goats, black yaks and horses through the summer months.

They move to the slightly lower altitude grazing lands straddling Tibet and along the mighty Indus river during harsh winter months of December to February when temperatures drop up to minus 50 degrees Celsius (minus 58 degrees Fahrenheit).

The military tensions are the latest blow for the herders, who are already reeling from the impact of climate change which has made winters harsher and summers drier.

Some have even abandoned their generations-long way of life to migrate to towns in Ladakh in search of other sources of income.