US President Donald Trump will prolong a ban on US employment permits to year-end and broaden it to include H-1B visas used widely in the tech industry, the White House said Monday.

A senior administration official told journalists that the move would free up 525,000 jobs, making a dent in the high unemployment rate caused by the coronavirus pandemic.

“President Trump is focused on getting Americans back to work as quickly as possible,” the official said, on condition of anonymity. 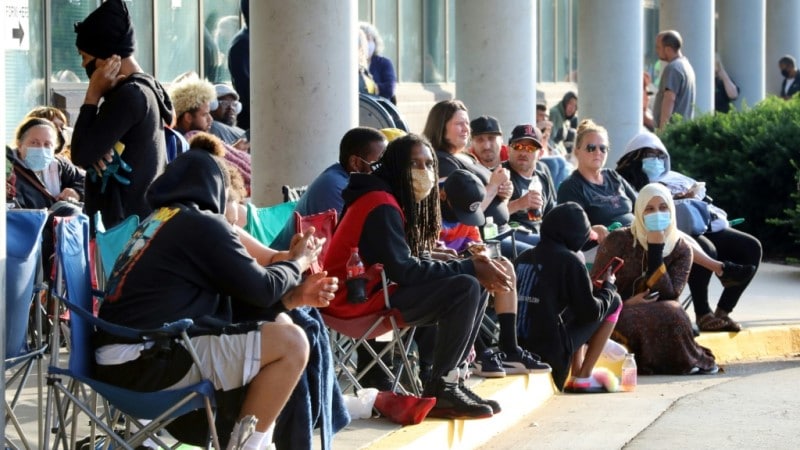 Hundreds of unemployed people wait outside the Kentucky Career Center in Frankfort, Kentucky for help with their unemployment claims

Trump had endlessly touted a strong economy, but now finds himself desperate for a political boost ahead of the November election.

The administration official said the new order would extend to the end of 2020 and include H-1B visas provided to 85,000 workers each year with special skills, many of them joining the US technology industry.

It will also cover most J visas, common for academics and researchers, and L visas used by companies to shift workers based overseas to their US offices.

The official said the order was necessary to respond to soaring unemployment that resulted from the COVID-19 shutdown.

The official also stressed the H-1B visa freeze was temporary while the program is restructured, shifting from an annual lottery that feeds coders and other specialists to Silicon Valley to a system the gives priority to those foreign workers with the most value.

Trump “is going to prioritize those workers who are offered the highest wages,” as an indicator that they can add more value to the US economy, the official said.

“It will eliminate competition with Americans… in these industries at the entry level, and will do more to get the best and the brightest.”

The move also freezes most H-2B visas — used each year for about 66,000 short-term, low-skilled jobs in landscaping, food and hospitality industries — and H-4 visas, which allow spouses of other visa holders to work.

In addition, the official said the government is issuing new regulations that will make it much harder for tens of thousands of asylum seekers waiting for their court hearings to work legally in the meanwhile.

With often a two-year wait for a case to be reviewed, the administration sees many people apply for asylum mainly to be able to acquire work permits.

Layoffs caused by the coronavirus pandemic in the United States passed 45.7 million last week, and although many jobs will come back as the country reopens, there are worries that some have been irrevocably lost by the heavy financial impact on businesses and local governments.

Federal Reserve Chair Jerome Powell warned earlier this month that unemployment could still be 9.3 percent nationwide at the end of the year, an improvement from the current 13.3 percent but still devastatingly high.