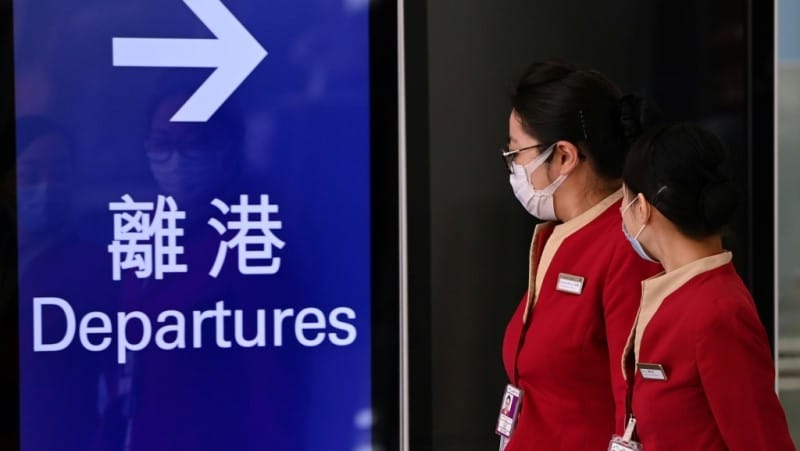 The United States said Thursday it was “deeply concerned” by a new Hong Kong immigration law which includes powers to stop people leaving the city, raising fears Chinese mainland-style exit bans could be deployed there.

The law was passed on Wednesday by a city legislature now devoid of opposition, as Beijing seeks to quash dissent and make the semi-autonomous city more like the authoritarian mainland following huge and often violent democracy protests.

It grants the immigration chief powers to bar people from boarding planes to and from the city.

“We are aware of this legislation and share widespread concerns in Hong Kong about its content, potential uses, and lack of oversight or accountability,” a State Department spokesperson said in a statement on Thursday.

“We have long standing concerns about the PRC’s arbitrary use of exit bans without due process of law, including against American citizens. We are deeply concerned by the prospect of Hong Kong authorities adopting similar arbitrary measures,” the spokesperson added.

Hong Kong’s government says the law will not be applied to people leaving the city and is aimed at stopping illegal immigrants traveling to the business hub.

But the wording of the bill does not limit the power to arriving flights or immigrants and legal experts say it could also be deployed against anyone leaving Hong Kong.

In a potential recognition of those concerns, Hong Kong’s government late Wednesday said it would draft subsidiary legislation specifying that the law would only be applied to inbound flights.

The US statement urged the Hong Kong government to honor this “public commitment” to not use the law “as a pretext to deny boarding for outbound passengers”.

“The right of people to leave Hong Kong is guaranteed under the Basic Law and should be upheld,” a spokesperson said, referring to the city’s post-handover mini-constitution.

Local activists and lawyers from Hong Kong’s influential Bar Association warn the bill gives “apparently unfettered power” to the immigration director to do the same, should they wish to.

Under Beijing’s direction, Hong Kong’s government has swung authoritarian since 2019’s huge protests, and faith in official assurances that the city is not becoming like the mainland has been rattled by recent events.

Beijing imposed a sweeping new national security on Hong Kong last year. Authorities said it would not impact people’s freedoms and only affect “a tiny minority”.

But its broad wording and application has since criminalized much dissent and radically transformed the once politically pluralistic city.