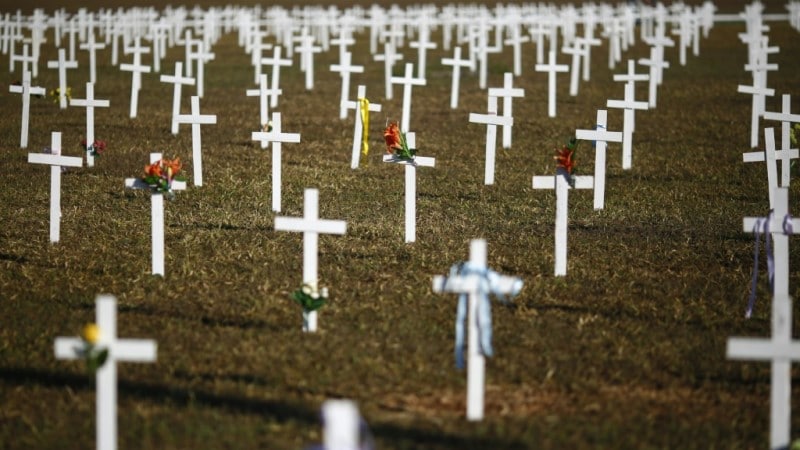 More than half a million people have died in the coronavirus pandemic, an AFP tally showed Sunday, as bars in Los Angeles were ordered to close again due to surging cases in the United States.

The worldwide number of recorded infections is now just over 10 million from the virus that first emerged in China late last year, with fears growing of a full-blown second wave. The rate of contagion has doubled since May 21.

One million new infections were recorded in just six days, according to the AFP count based on official sources, even as some countries loosen punishing lockdowns that have devastated their economies and thrown millions out of work. 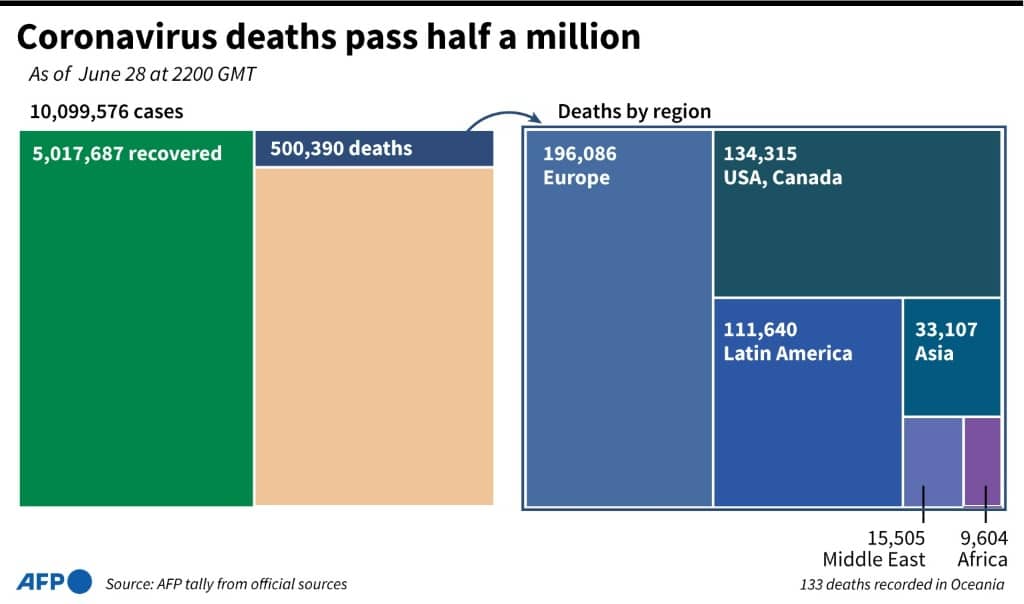 Number of official deaths, as of June 28

The United States, the hardest-hit country, has more than 2.5 million cases alone, and efforts to reopen the world’s biggest economy have been set back by a jump in new infections in big states such as Florida and California.

President Donald Trump was under growing pressure to set an example by wearing a face mask as his health secretary warned the “window is closing” for the country to gain control of the situation.

The disease is also rampaging through Latin America, where Brazil alone has over 1.3 million cases.

Infections are up too in some other parts of the world that have reopened, with Europe registering a caseload of over 2.6 million, although daily rates have stabilised. 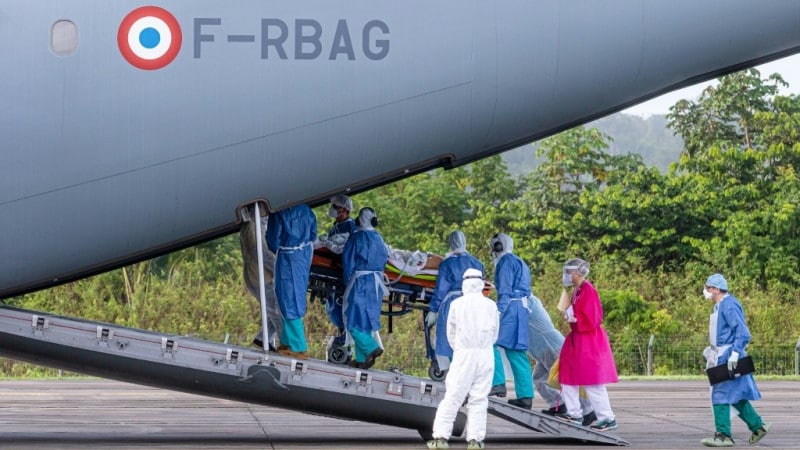 Medical staff carry a patient infected with Covid-19 into an Airbus A400M at an air-base in Matoury, Guiana

The US state of California was the latest authority to reimpose restrictions, ordering bars in Los Angeles and six other counties — an area with 13.5 million residents — to close because of the rising number of cases.

The hardest-hit parts of the US are in the south and west, where many state leaders had pushed for early economic reopenings.

But Los Angeles, the second-largest US city, only re-opened its bars on June 19.

California had already ordered some areas to reinstate stay-at-home orders, while San Francisco announced a “pause” in its reopening.

In Florida, Governor Ron DeSantis conceded there had been an “explosion” in new cases as the state notched a record 9,585 cases in 24 hours. 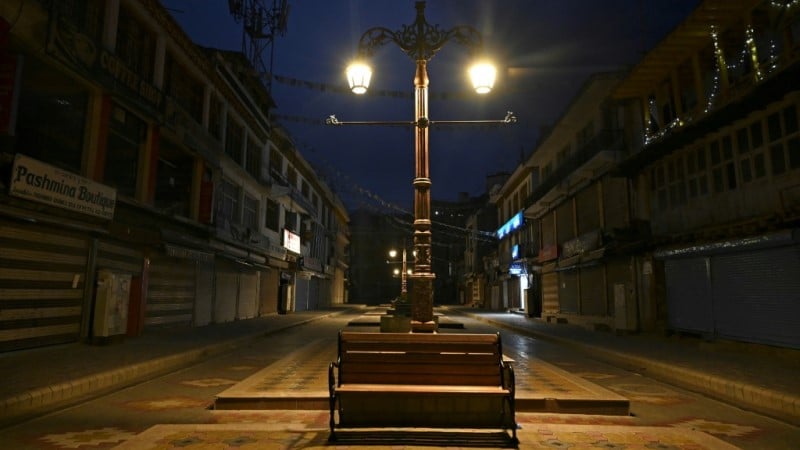 A market in Leh, India, is closed amid concerns over the spread of COVID-19

Young people frustrated by months of confinement have poured back to the state’s beaches, boardwalks and bars, often without masks and seemingly unconcerned about social distancing.

Miami announced beaches would close over the July 4 holiday weekend and bars are also shutting their doors.

New coronavirus cases have been surging in more than half of US states, reaching record highs. 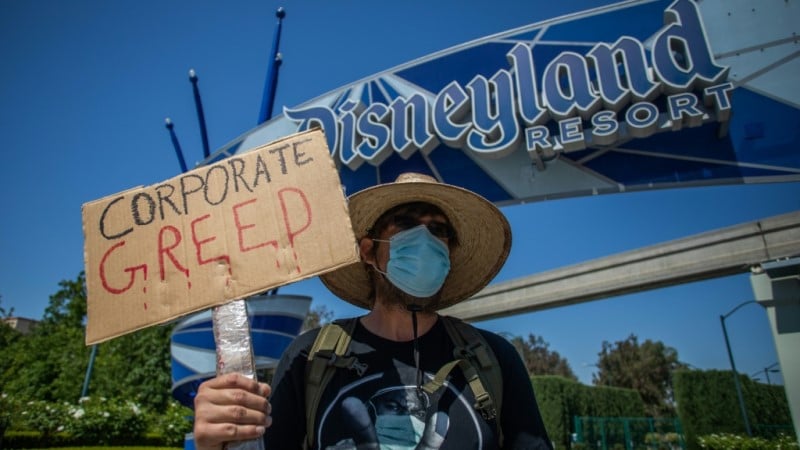 A man holds a sign in front of Disneyland Resort calling for higher safety standards before its reopening amid the coronavirus pandemic in Anaheim, California

China imposed a strict lockdown on nearly half a million people in a province surrounding Beijing to contain a fresh cluster.

And while the British government warned it might have to shut down the city of Leicester because of a spike in cases, it still plans a July 4 reopening of pubs, restaurants and hairdressers across England.

In Paris, police used tear gas to disperse crowds of young people who had gathered for an impromptu party on Saturday evening. 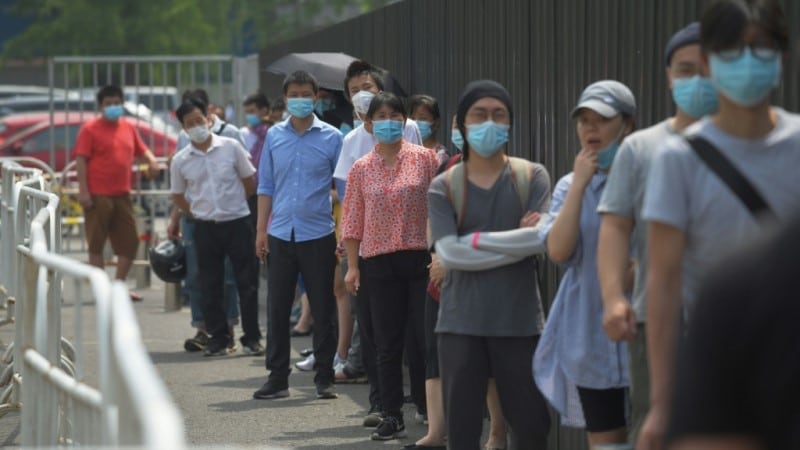 The tension between reopening battered economies — efforts pushed in the US by Trump — and public health concerns is a source of debate in nearly every country.

“This is a very, very serious situation and the window is closing for us to take action and get this under control,” Health and Human Services Secretary Alex Azar said on CNN.

The EU has pushed back a decision on a list of “safe countries” from which travellers can visit Europe — a list which could exclude the US. 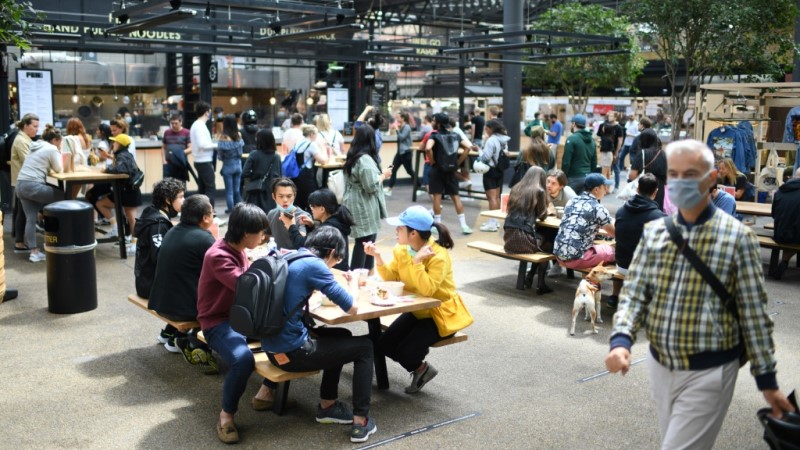 With Trump struggling to get his re-election bid off the ground ahead of the November vote, the campaign confirmed that planned events featuring Vice President Mike Pence in Arizona and Florida next week had been postponed “out of an abundance of caution”.

Although a nationwide lockdown is gradually being eased, the country set a daily record Saturday with 18,500 new cases and 385 deaths. Total infections are at 509,000, with more than 15,600 deaths. 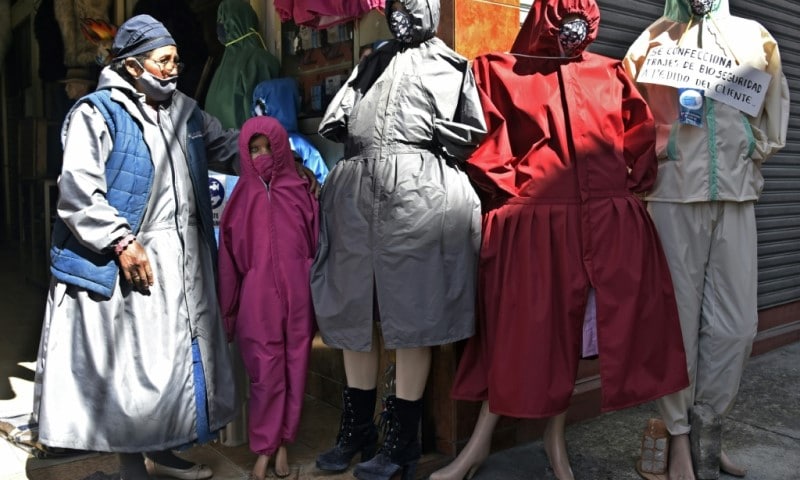 A woman stands next to protective suits designed for “cholitas” (indigenous women who wear typical skirts) outside a store in La Paz, Bolivia

Iran, which has struggled to curb its outbreak even as it gradually lifted restrictions from April, said it would make mask-wearing mandatory in certain areas from next week.

Many global events have had to be curtailed because of the pandemic, with the 50th anniversary of the first Gay Pride march marked mostly online.