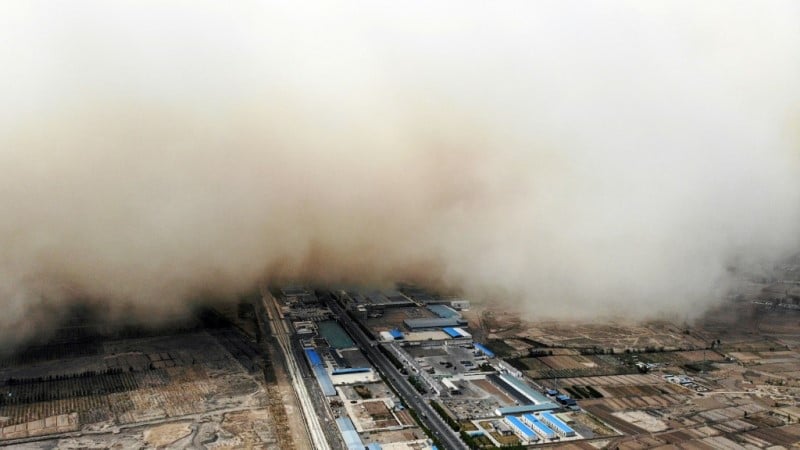 Aerial photos showed a sandstorm engulfing a village in Linze county, in the city of Zhangye in China’s northwestern Gansu province

A towering wall of sand rushed over factories and apartment blocks in northwestern China’s Gansu province as seasonal sandstorms barrelled across the country, causing air pollution and traffic accidents.

Aerial images as it struck showed an apocalyptic scene as a billowing cloud of yellow dust smothered Gansu’s Linze county on Sunday.

China suffers from enormous dust storms each spring that lift sand from the Gobi desert and dump it onto cities as far away as Shandong on the eastern coast.

A sandstorm that pushed air pollution levels off the charts hit Beijing in March, turning the sky a dark yellow and forcing airlines to cancel hundreds of flights.

It was the worst sandstorm in a decade to hit the capital, which has pinned hopes of rebuilding a natural barrier to such phenomena on intensive tree replanting in stripped forest areas, also known as the “green great wall”.

Beijing said last year it expected fewer and weaker sandstorms to hit northern China due to the reforestation efforts.