One of China's top historic attractions issued an apology after two women drove an SUV into the Forbidden City in Beijing and posed for pictures when it was meant to be closed to the public.

Photos of the pair wearing sunglasses and standing in front of the luxury vehicle alone in a grand square usually packed with tourists quickly sparked outrage after they were posted on social media.

The sprawling, nearly 600-year-old former imperial palace in the center of the Chinese capital says it welcomed 19 million visitors last year, all of whom had to enter on foot.

In a statement the UNESCO world heritage site, also known as the Palace Museum, confirmed that the incident happened on Monday, a day it is usually shut.

“The Palace Museum is deeply shocked and sincerely apologizes to the public,” it said late Friday on the Twitter-like platform Weibo, adding that it would “strictly manage and stop such actions” from taking place in future.

The controversial photos had been posted on Weibo this week but were swiftly deleted after sparking ire among users questioning how the women had entered the Forbidden City, which is very well guarded. 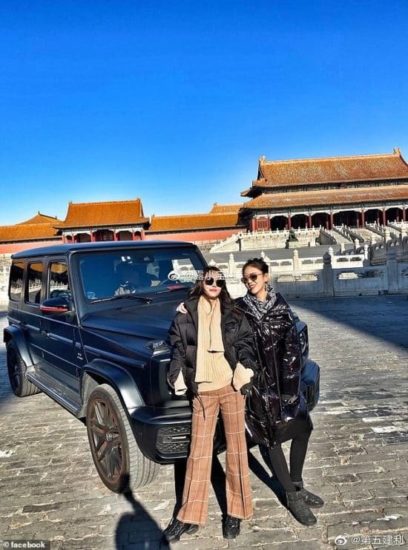 Many commenters expressed indignation at privileges and freebies perceived to be dished out to China’s rich elites. “Such behavior is hurtful to the citizens,” said one angry user.

“Even foreign leaders must get out of their vehicle” to visit the palace, noted another user called Maomao.

Footage of French President Emmanuel Macron and his wife Brigitte visiting the Forbidden Palace two years ago shows the leader touring the site on foot.