How did the Oscars treat Asia this year? Not much luck in terms of nominees, but still, any movement in the right direction is welcome. There are now 4 Asian nominees which includes two films and two short that you should definitely add to your “to watch” list early this year: Toronto-based Domi Shee’s animated short “Bao” (Short Film – Animated), Hirokazu Kore- “Shoplifters” (Best Foreign Language Film,) and Bing Liu’s “Minding the Gap,” which debuted at Sundance 2018’s U.S. Documentary Competition and has won the Special Jury Award in Breakthrough Filmmaking, which has also been nominated for this year’s Documentary (Feature), and Rayka Zehtabchi’s “Period. End of Sentence” nominted for short documentary.

In recent years, it appears that South Korea and Japan are maintaining the vanguard of Asian films at the Academy Awards.

“Bao” is an animated short film produced by Pixar Animation Studios, and was released with Incredibles 2. The creator, Domee Shi said in an interview that “she always wanted to put a little bit of herself in the short.” She also said that her initial goal was to explore the relationship between an overprotected child and a parent, using the dumpling as a metaphor.

Magnolia Pictures & Magnet Releasing’s “Shoplifters” on the other hand, explores the variegated lives of a poverty-stricken – Osamu, Aki, Nobuyo, Shota, and Atsue. The film revolves around the routine shoplifting of Osamu and Shota, and presents a gritty depiction of modern-day Tokyo, from the street level.

In an interview with Vulture, “Shoplifters” director Hirokazu Kore- explained succinctly that the film was about current social realities in Japan (specifically, the rising poverty rate in an aging population) and about the “invisible people” or people at the margins of society.

“Minding the Gap” features improvisational and largely unconventional camerawork and storytelling and presents a seemingly linear narrative that suddenly explodes into several directions when things just happen to the people involved in the documentary.

What begins as an interesting foray into skateboard culture and the funny antics of young male friends suddenly gains an edge when Zack, one of the director’s two friends, gets his girlfriend pregnant.

The fragmentation of the ideal narrative where the viewer can comfortably sink into a safe world where problems are but muffled sounds are cast away in favor of a discomfiting take on modern masculinity, skateboard culture, and what it really means to be a man. This film has garnered a 100% rating on Rotten Tomatoes, with an overall audience score of 97%.

“Period. End of Sentence” is a short documentary about the stigma surrounding menstruation in the rural village of Delhi, India. 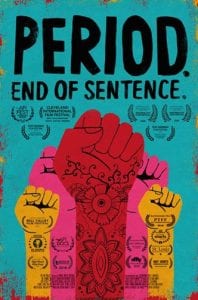 The belief that menstruation is shameful is rooted in many eastern cultures.  The movie highlights how a group of teenagers in America help power a positive movement thousands of miles away by raising money and bringing awareness to the problem. Not only did their movement uplifted the local community one of the oldest women’s taboos. It also ignited conversations in neighborhoods across North America that feminine hygiene products are life necessities that should be treated as a non-taxable product.  The movie is now available on Netflix.