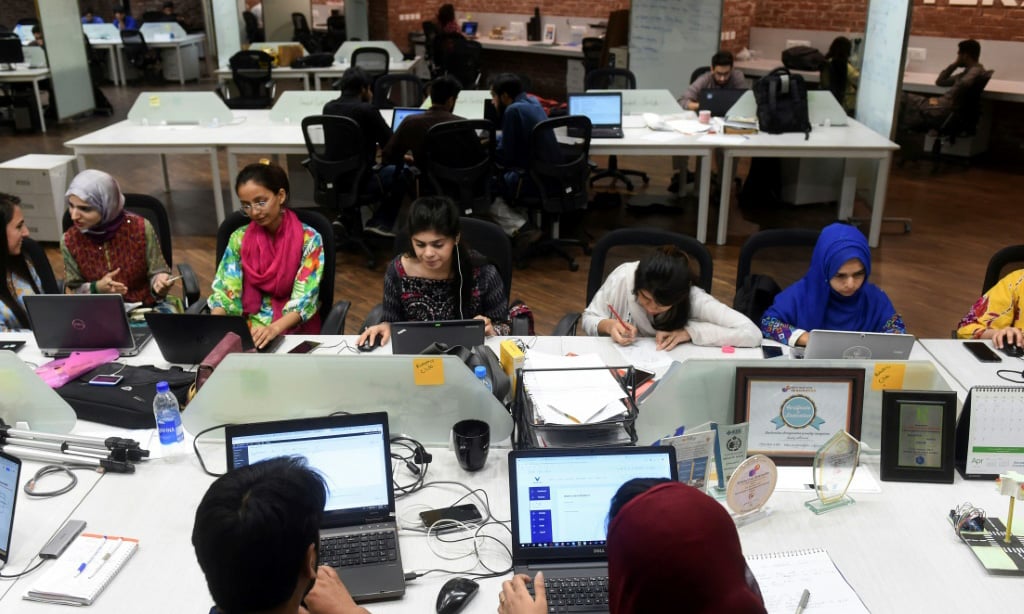 Pakistan’s government is enthusiastic about start-ups and has launched incubators in dozens of universities and tech schools, which it hopes will help develop the sector

For many of Pakistan's farmers, long at the mercy of ruthless middlemen, an app enabling them to sell direct to clients could mean more money in their pockets.

Omar Majid Warraich knew his idea could help thousands earn more from their crops, but the problem was he did not know how to execute it.

“As a start-up, you tend to need advice about the do’s and don’ts, when to pitch an idea, what to pitch to investors, apply for grants, get the loans,” he told AFP.

Today the co-founder of Agrim@art is one of Pakistan’s start-up success stories — his platform has more than 700 registered and verified farmers and a $100,000 grant from Karandaaz, an investment platform sponsored by the Bill and Melinda Gates Foundation.

Officially launched in August last year, Agrim@art reported sales worth 5.5 million rupees ($36,000) in its first three months, and predict they will have 2,000 farmers working with them by March 2020.

Like tech entrepreneurs around the world, Warraich turned to a start-up incubator for help getting his idea off the ground — the National Incubation Center (NIC), a public-private partnership based in Lahore.

The challenges he faced are not uncommon in Pakistan, where the education system is weak, and the economy is faltering.

Some 64 percent of Pakistanis are under the age of 30, and youth unemployment stood at six percent in 2019, according to a report commissioned by the UN.

Incubation centers fostering innovation and entrepreneurship in the tech sector are “the solution”, believes Faisal Sherjan, program director at NIC.

Its hub, with its colorful walls, state of the art labs and quirky furniture, is far removed from the daily grind of the heaving, traffic-choked, polluted city of 11 million.

Teams there have six months to set up their businesses while utilizing its facilities, which include Facebook’s newly installed VR lab to a host of business workshops.

There are supervisors and mentors to help entrepreneurs navigate Pakistan’s daunting business environment.

There have been some homegrown tech hits: Bykea, a motorbike-hailing app, raised more than $7 million in 2019 and is expected to raise another $15 million in the first quarter of 2020.

The country has both a huge talent pool and a huge market, offering the “right mix” for investors, says Khurram Zafar, director of Karandaaz and 47 ventures, a fund that only invests in Pakistan.

But there are concerns about how tech start-ups can successfully navigate a messy business environment.

Pakistan was still ranked a dismal 122 out of 137 on the Global Entrepreneurship Index in 2018, and 108th on the World Bank’s ease-of-doing-business list.

Kalsoom Lakhani, founder and CEO of the fund Invest2Innovate (i2i), cited the “bureaucratic headaches”, “the difficulty of bringing money into the country and the impossibility of getting it out”, and the “very debilitating” taxation, as key issues.

Bribery and corruption are widespread, while government efforts to tackle graft have resulted in an unfriendly regulatory environment “towards investors and entrepreneurs alike”, i2i said in a 2019 report on Pakistan’s start-up ecosystem.

The government is enthusiastic about start-ups and has launched incubators in dozens of universities and tech schools, which it hopes will help develop the sector.

Ride-hailing app Uber has partnered with a government fund to bring its #UberPitch to Pakistan, where budding businesses are given a chance to present their ideas, while Google and Facebook have awarded grants to start-ups featured on Pakistani reality show Idea Croron Ka (Million Dollar Idea).

But, compared to countries such as neighboring India, investment has been slow to come, making it hard for start-ups to grow beyond their incubation period.

Many tech entrepreneurs are out of touch with the realities of Pakistan and the unique needs of consumers there, said Maryam Mohiddin Ahmed, co-author of a report on Pakistani start-ups entitled “Beyond the Buzz”.

“We don’t need people to get our emails arrive faster but our crops to grow better. If a large chunk of the population is not being served by innovations, then what is the point of innovating?” she added.

What Pakistan needs is more “game-changing startups” on a human and environmental level, she argued.

But despite the challenges, there is room for optimism.

With Pakistan’s young population rapidly digitizing, “never have the opportunities for social, economic and political progress been so great”, the UNDP stated in a 2018 report.

by Kaneez FATIMA and Joris FIORITI