Chinese investor Jiang Rungong, who moved to Greece three years ago, says he and his family could not be happier in their new home on the Athens coast.
​”We chose Greece because of its cultural heritage, its history, the democracy, the freedom. We really like its atmosphere,” Jiang says.

“Since we got the visa, we’ve travelled to many European countries. And every time we come back to Greece, the moment we set foot in the airport, we feel like it’s home.”

The 52-year-old from Shanghai, his wife and son took advantage of Greece’s so-called Golden Visa scheme to come and live in Europe.

His 18-year-old son, Jiang Semniao, managed to learn Greek in just two years. He is attending a Greek public school and dreams of becoming a Greek citizen.

Under the arrangement, non-EU citizens are given a five-year residence permit in return for investing at least 250,000 euros ($275,000) in Greek real estate.

Greece is not the only European country to operate such a scheme.

​Other crisis-hit EU members such as Portugal, Cyprus and Spain have been offering similar incentives for years.

Following Greece’s decade-long recession, real estate prices remained at rock bottom for a long time, even if they have since started to rise again recently.

So far the programme seems to be working: the number of residence permits issued to non-EU citizens was up by 46 percent last year.

China and Greece have been building progressively closer trade and investment ties for more than a decade, ever since two main container terminals at the port of Piraeus were sold to Chinese shipping giant Cosco in 2008.

Greek Prime Minister Kyriakos Mitsotakis has just returned from a four-day visit to Shanghai, and Chinese President Xi Jinping arrives in Athens for a reciprocal three-day trip on Sunday.

Experts say the Chinese no longer regard Greece merely as a foot in the door to the EU’s free-travel Schengen zone, but actually enjoy life in their new home.

“They like to stay in Athens and the suburbs, forming little Chinatowns. They are buying blocks of flats, where all the owners are Chinese,” said Anny Avgouli, migration policy manager for a law firm, Dedes, that has a special department for golden visas specifically for Chinese customers.

But for some, the long wait time can be off-putting.

“When you tell a client that a year might be needed just to submit the request… it is like you are showing him the exit”, says Dedes law investment manager Dorina Cobzaru.

Applications are also being held up because they are processed in the same department that handles the asylum requests of tens of thousands of migrants.

And already, a huge backlog has built up.

To cut red tape and make investment easier, the newly elected conservative government approved a bill in late October that would allow would-be investors to get round China’s strict capital controls.

This is done by using multiple bank terminal transactions to transfer the requisite sum of $250,000.

Greek development minister Adonis Georgiadis, who recently visited China, said the Bank of Greece had concluded that “the use of bank terminals does not violate Greek or European law. If it is violating the Chinese law, this is a matter for China.”

Closer to home, however, Brussels is worried about such golden visa schemes.

In a report earlier this year, the European Commission singled out Cyprus, Bulgaria and Malta, complaining that wealthy candidates for residency or citizenship do not face adequate security and background checks.

Nevertheless, Greece is desperately seeking to attract foreign investors and says it cannot afford to lose the valuable income.

​According to the Bank of Greece, the scheme appears to be stimulating the country’s previously sluggish housing market.

And Chinese investors have plunged more than one billion euros in total into Greek property since the program was launched, the data showed.

Real estate is just one aspect of the closer cooperation between Athens and Beijing since Greece’s economic crisis, which saw it lose around a quarter of its gross domestic product. 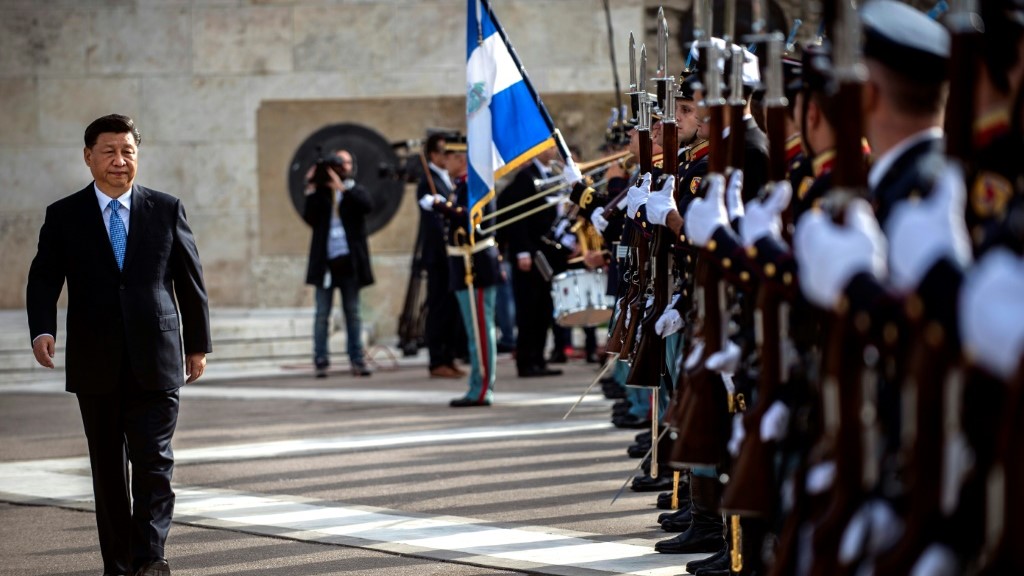 Chinese President Xi Jinping reviews the honor guard during a wreath laying ceremony at the monument of the unknown soldier in Athens on Novemper 11, 2019, as part of his state visit to Greece ©AFP