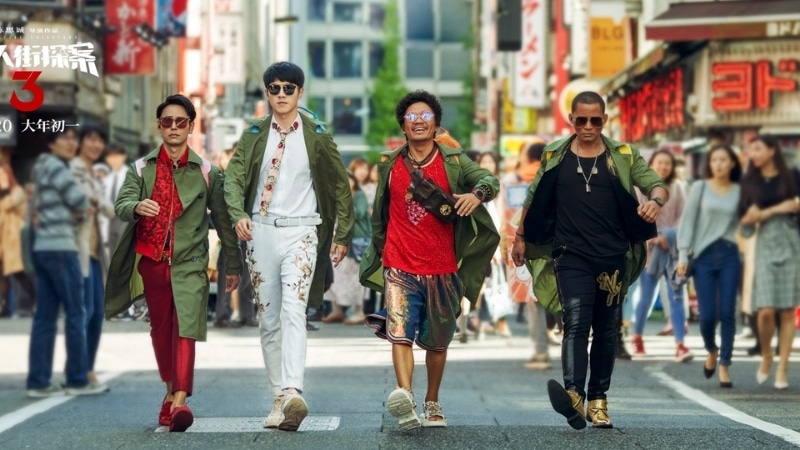 Wanda Pictures’ comedy film Detective Chinatown 3 welcomed the Chinese Lunar New Year with a bang. The film led the pack of seven other new releases and racked up a staggering RMB 810 million or $125 million on its opening day alone.

Its 3-day debut closed with almost $400 million. Ticketing services Maoyan even forecasts the film to rack up $912 million in its full run, which will make it the highest-grossing Chinese film in history. Whether this will happen or not, there’s no denying Detective Chinatown 3 already cemented its mask in the blockbuster.

Currently, Detective Chinatown 3 alongside Hi, Mom, has soared past the $600 million mark. Hi, Mom is a time travel comedy directed by Jia Ling. The film showed low sales during its debut but went on to dominate the box office after word of mouth got out. On the other hand, the franchise appeal of DC3 created a strong marketing buzz going into the new year. In fact, only several movies raked in this much in so little time.

The sales of DC3 speak for themselves. The film can be enjoyed by kids and adults, making it a must-see for the entire family.

The goofy entry to the action series features a cop team of a reckless young man, and a Brainiac – truly a recipe for a blockbuster phenomenon. The film can be compared to Hollywood franchises like Lethal Weapon and Rush Hour.

One of the most engaging parts of the film is when Qin uses his computer-like intellect to develop complex theories and figure out information to help him solve the cases they are pursuing.

Detective Chinatown 3 centers on the murder of a Japanese crime boss, and the plot is intensified even further by surprise elements, including the theories Qin thinks of. The film may seem absurdly unrealistic at times, but the audience just needs to ride it out and let the film run its course.

Qin Feng played by Liu Haoran stars as a very smart detective. In the first film set in Bangkok, he was paired with Tang Ren starring Wang Baoqiang. For the second installment, the action went to New York, and brilliantly showcased the cultural differences of all characters.

The movie franchise was initiated by Chen Sicheng, who spent more than a decade acting before starting his writer/director/lead actor career on Beijing Love Story in 2012. The show released 39 episodes, with a feature follow-up version in 2014.

Considering it’s the third installment, it’s no wonder why Wanda Pictures went all out to produce its high-end level production value. The film was shot entirely using IMAX cameras and it’s set in Japan.

Movie Industry after the Pandemic

Perhaps one of the reasons why the film became a hit in no time is because people crave to experience watching films in cinemas again after the pandemic hit.

Now that the pandemic is under control in China, the country’s film industry is thriving immensely, even without Hollywood films. The sales of Detective Chinatown 3 and Hi, Mom are a testament to how the country is becoming more self-reliant when it comes to entertainment.

Since China began showing foreign films 27 years ago, Hollywood films raked up 40 percent share of their box office. Hollywood even nabbed about a third of the highest-grossing films in the country.

This rising momentum did not just start before the pandemic. Even before COVID-19, the country already showed more sales for their film industry. With the Hollywood shutdown in 2020, foreign films only took 16 percent of box office revenue in China. This trend continued in the first months of 2021 as more big-budget foreign films have postponed airing.