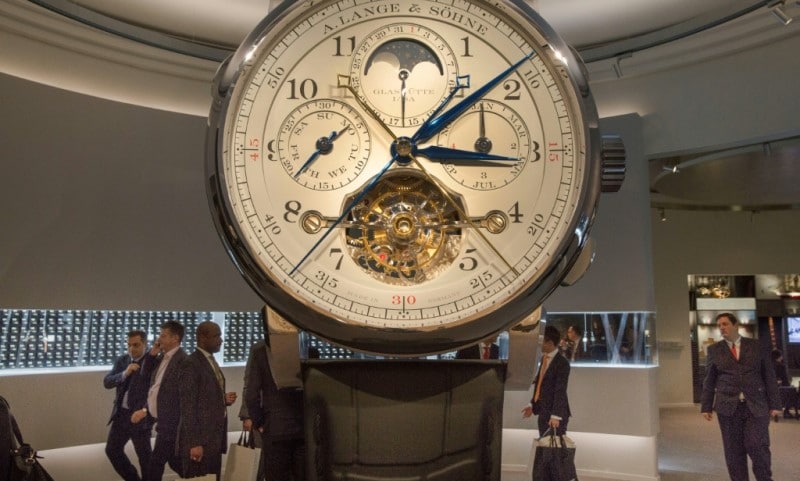 Geneva’s international expo of fine watches switches to Shanghai on Wednesday for a physical version after staging an online edition to keep the prestigious fair going during the pandemic.

The Salon International de la Haute Horlogerie, now restyled as Watches and Wonders, was canceled last year due to the coronavirus crisis.

This year, with Europe battling a third wave of the pandemic, the fair — one of the major annual gatherings for luxury watchmakers — opened online on April 7, closing on Tuesday.

But an in-person version will run from Wednesday until Sunday in Shanghai, where the coronavirus is under control.

Lovers of beautiful watches have seen several new products unveiled by some of the 38 brands participating on the salon’s digital platform.

Chanel has produced watches in pop colors inspired by 1990s electro music; Rolex made a dial from a fragment of meteorite, while Cartier has produced a watch strap from 40-percent plant material taken from waste apples.

Nineteen brands will be at the physical event in Shanghai.

The virtual version is “a great opportunity to learn”, Edouard Meylan, the head of luxury watchmaker H. Moser, told AFP.

Even once the crisis is over, online events will become more commonplace, he predicted.

“It will never replace the salons and making contact in person,” he added. “But it is in tune with the times.”

The company was founded in 1828 by Swiss watchmaker Heinrich Moser, who made his fortune in Saint Petersburg by joining forces with the Russian tsars’ jeweler Gustav Faberge.

When Meylan realized that the pandemic was not going away any time soon, he invested in digital technology, shifting the brand into a new era.

“We bought cameras, lights and set up a whole studio in the workshop, with decor. It looks like a movie set,” he said.

Unable to travel due to the pandemic, he even set up chic Zoom aperitifs with luxury watch shops. Sending them fine wines, he would then settle down with the same vintage in the studio to talk them through new designs and models.

Hit Hard by the Pandemic

For Guillaume de Seynes, one of the Hermes brand’s directors, the digital salon cannot quite replicate the traditional in-person set-up.

“It’s inevitably a disappointment, given that there was already no event last year,” he told AFP.

The Parisian house set itself up in Geneva’s Batiment des Forces Motrices, a grand entertainment venue on the River Rhone, and let two young French artists create an installation featuring the flagship H08 model presented at the salon.

Hermes thereby ensured it could have a swish venue in the heart of Geneva “even for virtual meetings” and events, said de Seynes.

Jean-Daniel Pasche, president of the Federation of the Swiss Watch Industry, is just happy the salon could be held in any format following a tough year for the industry.

Switzerland’s third-largest export sector has been hit hard by the Covid-19 crisis, with boutiques shuttered due to virus control measures, and the collapse of the tourism industry on which the luxury sector depends.

In 2020, Swiss watch exports fell by 21.8 percent to 17 billion Swiss francs ($18.6 billion, 15.8 billion euros) compared with the previous year, according to the federation’s figures.

China became the biggest export market for Swiss watches in 2020 as exports dropped to the former front-runners — by 36.9 percent to Hong Kong and by 17.5 percent to the United States.

China was the only growth market among major destinations for Swiss watchmakers, with exports up 20 percent to almost 2.4 billion francs, while Chinese consumer purchases have shifted to local stores due to travel restrictions.

“E-commerce was already booming and the pandemic has further accelerated the trend,” said Pasche.

“But the crisis has confirmed that online and offline will continue to coexist,” he added.

Customers always want to see, touch and try out products, even when their purchase is ultimately made in a few clicks, he said.