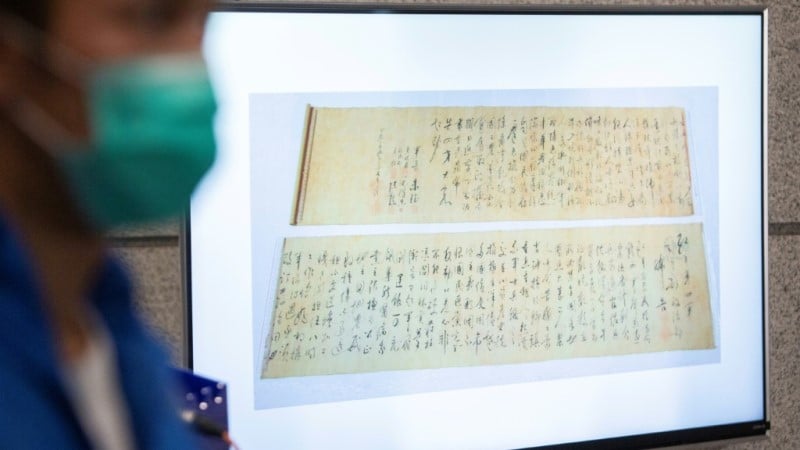 Someone handling the poetry scroll cut it in half after judging it “too difficult to display”, police said

A stolen poetry scroll written by Mao Zedong and valued at hundreds of millions of dollars has been recovered, Hong Kong police said Wednesday — but not before it was cut in half.

Officers said someone handling the thieved artifact had given it the chop after judging it “too difficult to display”.

The calligraphy scroll — worth an estimated US$300 million — was the most valuable item taken in a brazen robbery last month targeting the Hong Kong apartment of Chinese collector Fu Chunxiao.

The gang of three made off with a hoard of treasures worth, according to Fu, an estimated HK$5 billion ($645 million) that included antique stamps and revolutionary items from mainland China in what is believed to be the city’s biggest heist by value.

On Wednesday, police announced they had recovered the Mao scroll and two bronze coins. But the scroll had suffered devastating damage.

“Someone claimed that (the scroll) was too difficult to display because it was too long so it was cut in half,” Senior Superintendent Tony Ho told reporters.

Police said one person was arrested on suspicion of handling stolen goods, another for burglary and the third for assisting a criminal.

The robbery itself was remarkably simple.

The thieves walked into the 16-story residential building, prised open an iron gate and burst through a wooden door to get inside the apartment, before making off via the same route with the goods, police said at the time.

On Wednesday investigators said earlier appeals for public information had helped them track down a taxi driver who helped them identify key suspects and locations.

Police believe they have identified the remaining two thieves, who are currently at large.