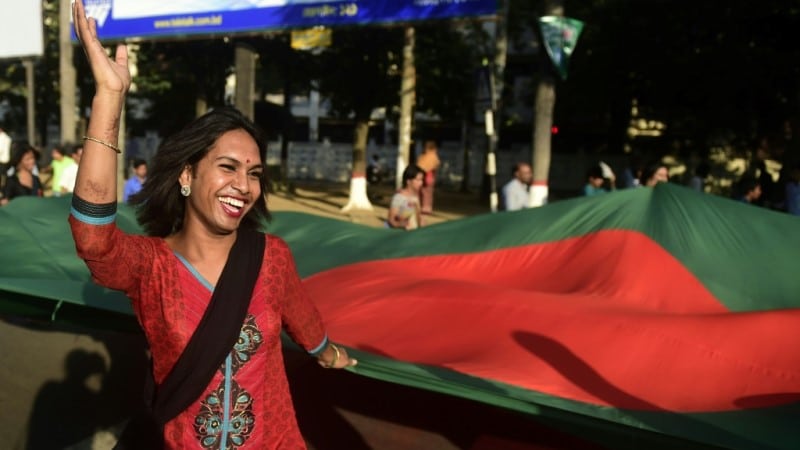 A transgender person holds a national flag during a 2014 rally in Bangladesh, which is posed to offer new rights to the minority group

Transgender people will soon be able to inherit property from their families, Bangladesh’s law minister said Sunday, the latest effort to give the minority group more rights in the conservative Muslim-majority nation.

Prime Minister Sheikh Hasina told a cabinet meeting this week that new inheritance laws for the group, known as hijra — an umbrella term referring to someone who is born male but does not refer to themselves as a man or woman — were being drafted.

“We’re trying to frame a legislation in accordance with the Islamic sharia law and our constitution which will ensure the property rights for a transgender family member,” Law Minister Anisul Huq told AFP.

The bill has yet to be proposed in parliament but is expected to comfortably pass the legislative body.

Bangladesh has allowed transgender people, who number around 1.5 million, to identify as a separate gender since 2013.

Last year they were allowed to register to vote as a third gender. Earlier this month, the South Asian country opened its first Islamic school for transgender Muslims.

But the LGBTQI community still faces widespread discrimination, with a colonial-era law in place that punishes gay sex by prison terms, though enforcement is rare.

Rights activists welcomed the move but were skeptical about whether the law would be enforceable with many families still rejecting their transgender offspring.

“As an activist, I am happy the issue is getting focus. But it’s not just a matter of legislation, rather it requires a change in the entire society,” said Ananya Banik, 40, who heads transgender rights group SadaKalo.

Banik said she came out as transgender when she was 16.

“I had to leave my family because of the pressure they received from other families when I was growing up. And I’m not alone, there are hundreds of thousands of members in our community who had to leave their families behind,” Banik, who prefers to be called she, added.

She said many transgenders leave their homes at a young age, often driven away from family members, and could face violence if they return to claim their inheritances.

In 2015 Islamist extremists hacked to death a leading gay activist and editor of an LGBTQI magazine, while other prominent homosexuals have since fled the country.