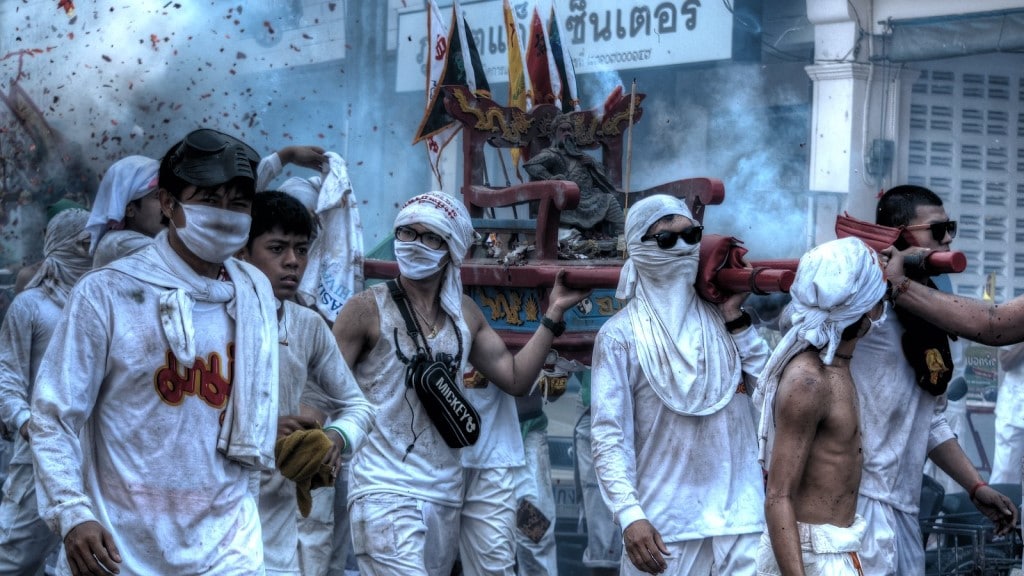 October is now around the corner and travelers from around Asia and the world will soon flock over at Phuket, Thailand to witness a festival which highlights one of the most macabre displays of body mutilations.

On the eve of the ninth lunar month of the Chinese calendar, Taoist temples from all around the country will hold a ceremony to commemorate the arrival of the Nine Emperor Gods. It will run for nine days, somewhere between the end of September up to the early week of October each year.

Aptly called the Nine Emperor Gods Festival, this celebration has its roots traced back to China. However, it is observed with more prevalence in Thailand, hence the much popular term Kin Jay Festival or the Thai Vegetarian Festival.

Devotees of both Chinese and non-Chinese descent would cover themselves in white as they hole themselves at temples. The purification process would primarily involve the preparation and consumption of exclusively vegetarian dishes while abstaining from eating anything that is made of meat, seafood and dairy produce. Participants would also have to stay away from worldly pleasures like drinking alcohol, gambling, or having sex. 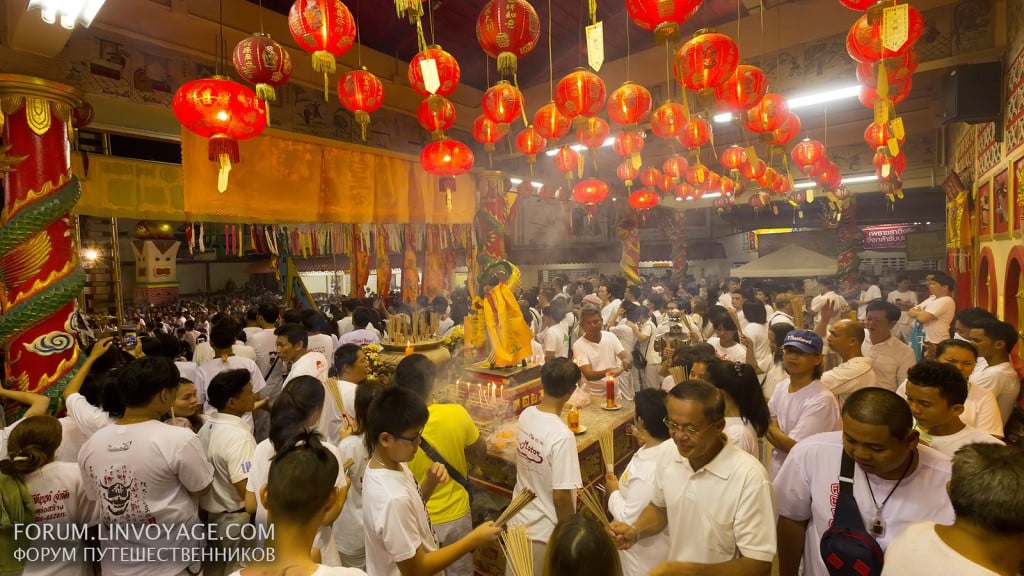 Although the above practices basically wrap the core essence of the festival, its solemnity ends here.

Judging from what the pictures and videos show, or even testimonies from those who were there to witness the events, you could say that this “vegetarian” festival is not for the fainthearted.

Not Your Average “Vegetarian Festival”

The Thai Vegetarian Festival is being held by many as one with the most extreme and bizarre festival practices not only in Thailand but also in the whole world.

More than just giving up meat and sex for the holiday, the main participants of the ceremony would perform self-mutilation.

This comes in various forms like walking on a bed of hot coals, climbing ladders with rungs made of knife blades, and the most gut-wrenching: piercing the cheeks with sharp objects. 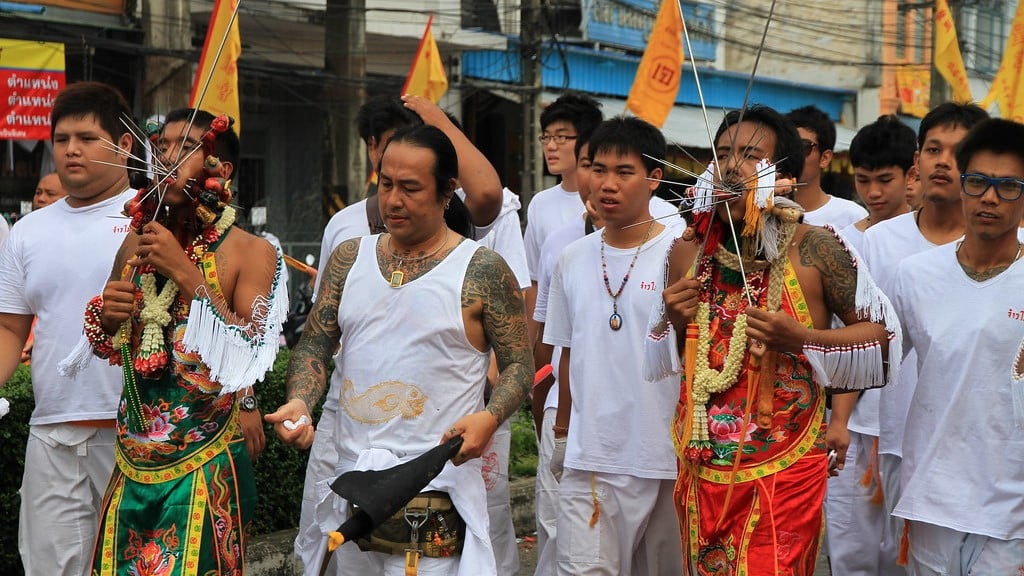 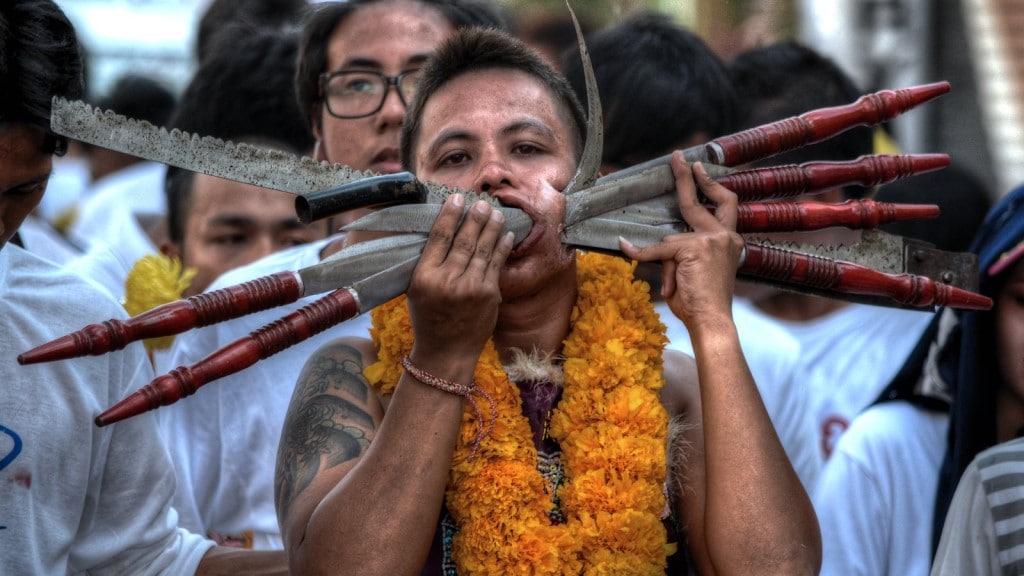 The participants, known as “mah song” which means “horses of the gods,” would adorn themselves with colorful costumes and piercings as they walk along the streets.

These piercings are not just your average, run-of-the-mill thing, as they would use a variety of items to puncture their bodies (but mostly through their cheeks) including swords, daggers, axes, and even wrenches!

Devotees commit to this painful act as a way to purify their body, mind and spirit. It is also believed to take away bad luck as well to ensure good fortune for the rest of the year.

This year, the Thai Vegetarian Festival will take place on September 28 up to October 7, 2019. Tourists and locals alike are encouraged to attend and take part in the procession with starting points originating from the different shrine locations.

In the ninth and last day of the festival, everyone is invited to cross the Bridge of Purification. It’s a ceremonial “bridge” that is set up inside a shrine. One is built for men and one for women.

The bridge is flanked by groups of Ma Song who will hand out each person crossing a string which symbolizes good luck. They will also receive a stamp which will prove the completion of their rites.