1,000-Year-Old ‘Stolen’ Artifacts to Return to Thailand from US 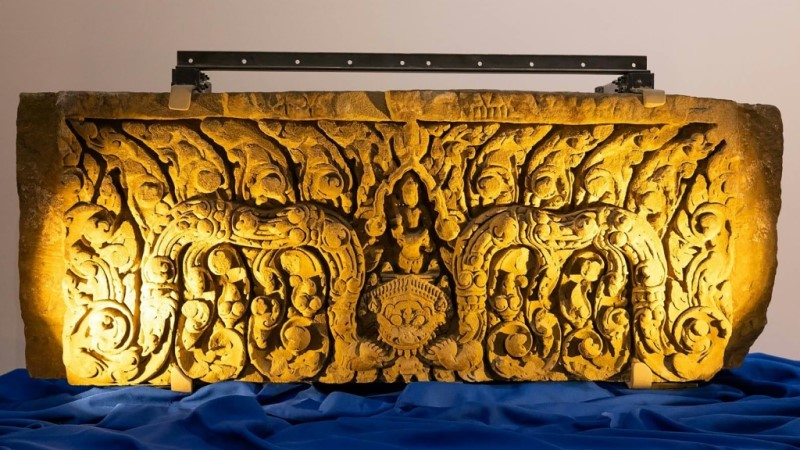 An ancient lintel from a temple in Thailand is heading back to the country after a handover ceremony in Los Angeles, California

Two ancient sandstone artifacts believed to have been stolen from Thailand during the Vietnam War are set to return from the United States Friday night, officials say.

The temple support beams with their exquisite carvings of the Hindu deities Indra and Yama date back to the late 10th or 11th century and had been on show for decades at the San Francisco Asian Art Museum.

They are expected to touch down in Bangkok on Friday night and will be put on display at the National Museum for three months from Tuesday, following a special ceremony.

Thai Fine Arts Department Director General Prateep Pengtako said the two lintels are about 1,000 years old and show the influence of the ancient Khmer Kingdom, which had its capital in modern-day Cambodia.

“Lintels are part of the structure of ancient Cambodian temples,” he told AFP.

The lintels were among 133 Thai artifacts on display at museums and galleries in the US.

“The return of these antiquities holds great importance in terms of history, archaeology, and culture to the Thai Government and the Thai people,” the Thai foreign ministry said, after a handover ceremony earlier this week between US authorities and the Royal Thai Consulate General in Los Angeles.

“It is believed that both of the sacred lintels were illegally exported from Thailand around the 1960s during the Vietnam War.”

The repatriation comes after a three-year investigation by the US Department of Homeland Security.

The California museum insisted it had long planned to return the artifacts, but disputed investigators’ allegations that they were stolen.

“We are very pleased that these lintels are going back to their country of origin,” Jay Xu, the museum director, said in a statement.

US museums are not the only ones to be embroiled in art provenance scandals in recent years.

Australia has repatriated at least eight looted statues to India since 2014.

France has vowed to return items taken from Senegal and Benin. The Netherlands is moving to repatriate artifacts stolen from its former colonies. And Germany has promised to give back artifacts to Nigeria.