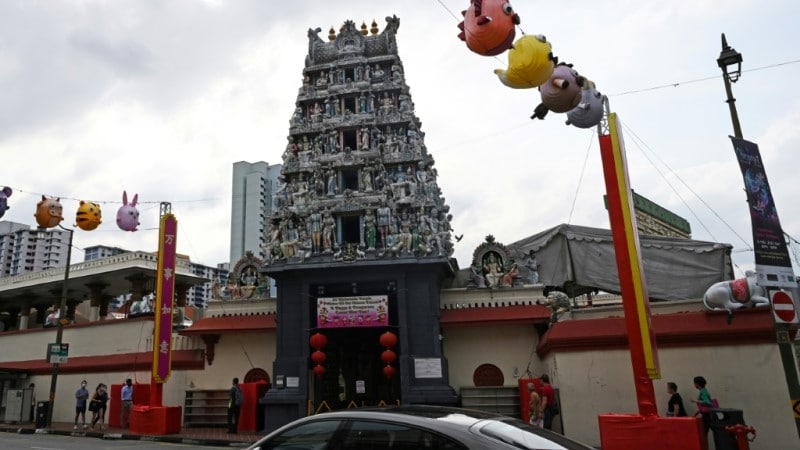 Sri Mariamman was built in 1827 by immigrants from southern India

Kandasamy Senapathi would redeem the pawned ornaments when he had raised enough money and return them to the temple, according to local media — but his ruse was uncovered when he could not get enough cash to buy the gold back after the coronavirus pandemic hit.

The 37-year-old Indian national worked at the Sri Mariamman Temple, a 194-year-old, ornately decorated place of worship in downtown Singapore that is popular with devotees and tourists alike.

He is accused of having pawned the gold items five times between 2016 and 2020 when he was still chief priest.

Temple authorities discovered the items were missing during an audit and he was arrested, and later stripped of his role as chief priest.

Kandasamy later managed to redeem the gold items and returned them to the temple.

The total pawn value of the items, which were frequently used in prayers, was more than Sg$2.0 million (US$1.5 million), according to court documents seen by AFP.

The ornaments were supposed to be kept in the custody of the chief priest in the temple’s inner sanctum.

Kandasamy was also charged with five counts of corruption for remitting back to India more than Sg$141,000 in criminal proceeds from his scheme.

He has been charged under laws against “criminal breach of trust” for pawning the items, and for each count faces up to 15 years.

He faces a jail term of up to 10 years on each corruption charge.

Singapore, whose population is mostly ethnic Chinese, is home to a sizeable Hindu minority.

Sri Mariamman was built in 1827 by immigrants from southern India and is dedicated to Goddess Mariamman, who is known for her purported power in curing epidemic illnesses and diseases.