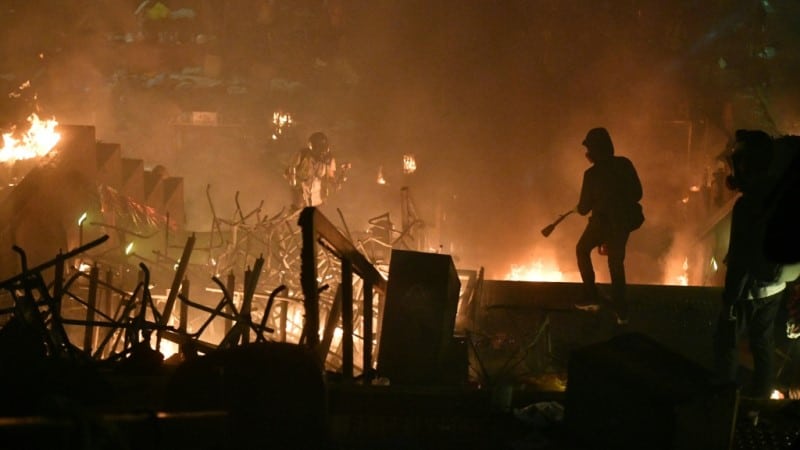 Hong Kong’s national security police on Friday raided buildings at the city’s top university after its student leaders paid tribute to a man who stabbed a policeman.

Anti-police sentiment has been running high in Hong Kong, a deeply polarised city since huge, often violent pro-democracy protests that took place in 2019.

On July 1, a lone attacker knifed a police officer in a busy shopping district before taking his own life in what authorities labelled an act of “domestic terrorism”.

But the student union council at the University of Hong Kong (HKU) expressed “deep sadness” at the man’s death in a statement, which prompted officials to call for action against the body.

Dozens of police officers with suitcases and boxes arrived at the university on Friday afternoon and searched buildings housing the student union, campus TV station and undergraduate office.

Police later said in a statement their national security department “conducted investigations and collected evidence at HKU today under a search warrant issued by the court”.

“The police are investigating a case related to advocating terrorism and searched our studio,” Kong Chak-ho, chairperson of the campus TV station, told reporters.

A spokesperson for HKU said the university was “obliged to act in compliance” with the probe.

The student union council last Friday withdrew its motion expressing sympathy for the attacker and apologised, but the backlash has been unrelenting.

Hong Kong’s leader Carrie Lam, who is also the university’s chancellor, on Tuesday called on HKU’s management as well as police to look into the motion for any violation of the law.

She called the resolution by the student union council “infuriating” and said she was “ashamed”.

HKU has severed ties with its own student union while the chairman of the university’s governing council said he would welcome any investigation by national security authorities.

It is not the first time police have entered a university campus in Hong Kong as part of an investigation under the city’s national security law.

China imposed the sweeping security law on Hong Kong last year to wipe out dissent after the financial hub was rocked by huge and often violent democracy protests.

More than 100 people, including many of the city’s best known democracy advocates, have been arrested under the law.