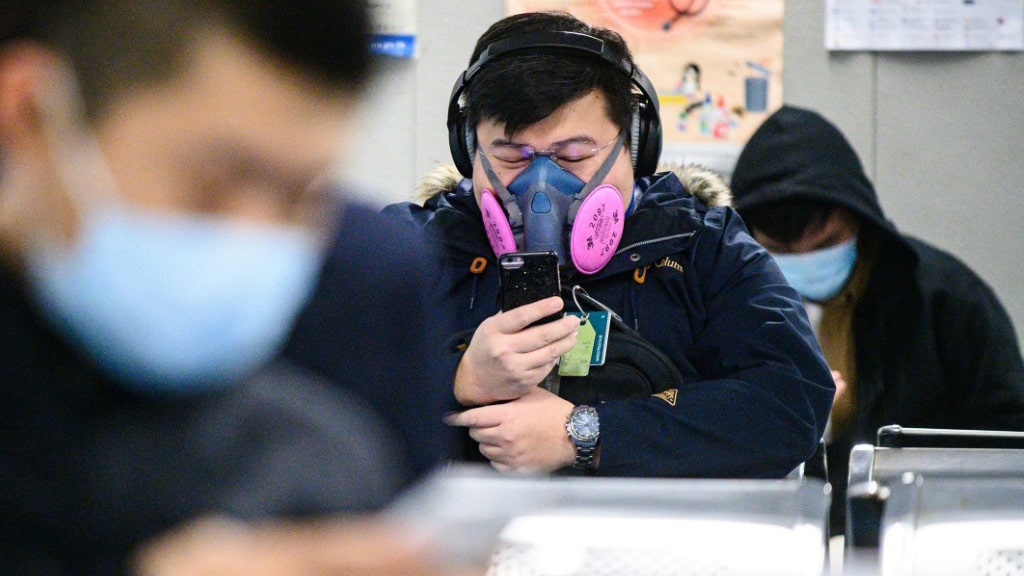 Hunkering down in cramped apartments and raiding supermarket shelves for food and masks, Hong Kongers are fretting about the future as fear of the new coronavirus sweeps one of the world’s most densely populated cities.

Many in the Asian financial hub of seven million — where the 2002-03 SARS outbreak killed 299 people — are weighing up their options against an unseen danger.

“I feel like I’m in a washing machine with other pregnant women trying to figure out what to do,” says Natalie Belbin, 35, who is expecting her first child and frantically considering her choices.

Her baby is due in early April, a period some experts warn could be the peak of the outbreak.

Hong Kong’s already under-pressure public hospitals have asked partners and family not to attend births to reduce pressure on wards.

Some expectant mothers in her WhatsApp groups are scraping together cash to go private, while others have traveled overseas or are considering it.

Belbin is leaning towards staying the course despite knowing her partner may not be able to be there.

“I’ve accepted that,” she said. “But my main concern now is whether the baby will be safe in the hospital.”

Many of Hong Kong’s inhabitants are having similar discussions about life in a city that has firsthand experience of a deadly outbreak.

In 2002-03 Severe Acute Respiratory Syndrome, or SARS, swept through hospitals and homes.

The epidemic left profound psychological scars and saddled locals with a deep distrust of authorities in Beijing who initially covered up the outbreak. 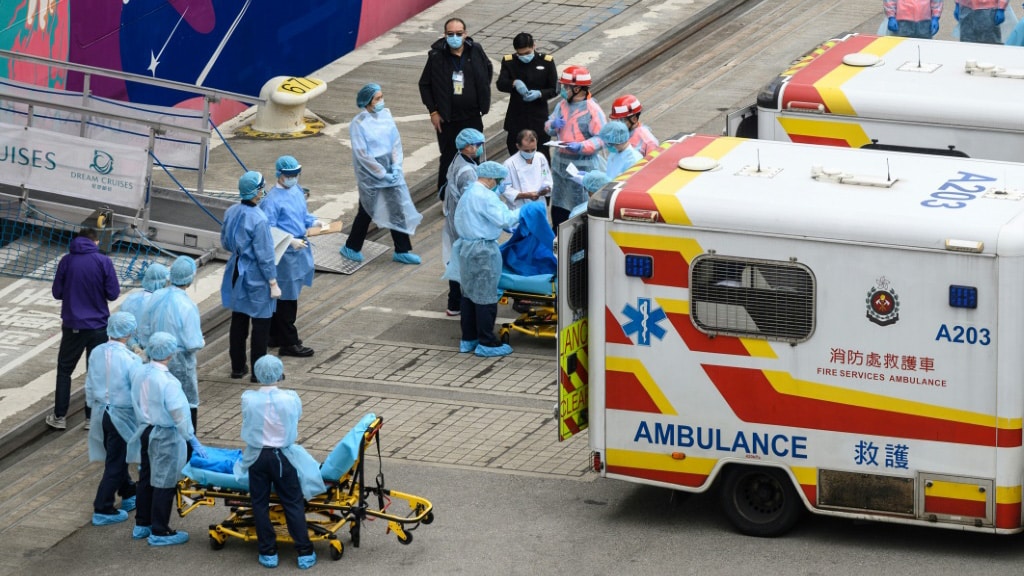 Public Hospitals are practicing strict protective measures to prevent the spread of coronavirus within the healthcare facility.

With 36 cases of the novel coronavirus confirmed so far in Hong Kong, one of whom died, everyone fears a repeat.

At the most extreme end, fear and distrust of authorities have sparked extraordinary, and at times unnecessary, scenes of panic.

Supermarket shelves in many districts have been stripped of hand sanitizers, toilet paper, rice and pasta, spurred by false rumors of shortages that the government has condemned.

An acute paucity of surgical masks is real however, with long queues whenever a consignment comes in. At one pharmacy last week a crowd of 10,000 people turned up, some camping out overnight.

Kris Choi, a new mother, said trying to find masks is all her neighbors talk about these days.

One 70-year-old neighbor was looking for ways to make her dwindling stock last longer.

“I wanted to stop her from washing the surgical masks, but I don’t have more to share with her as I have elderly parents and a child to look after,” Choi told AFP.

Attitudes have hardened compared to the city-wide solidarity that permeated Hong Kong during the SARS outbreak.

Police have clashed with protesters opposed to arrivals from mainland China or quarantine facilities in their neighborhoods.

One planned quarantine block was even firebombed.

Thousands of medics, including frontline doctors and nurses, went on strike last week calling for the border to be sealed. 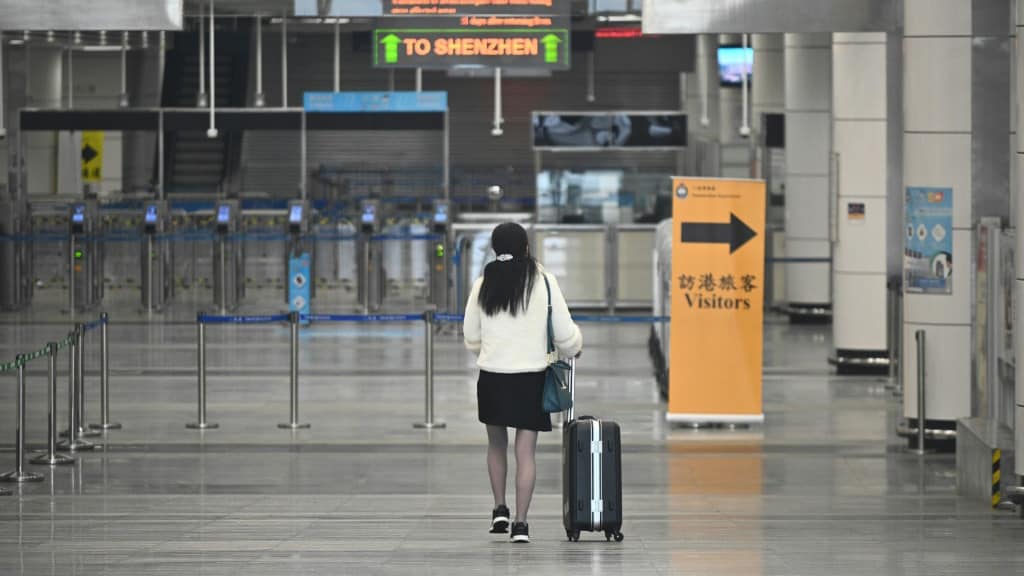 But even before the current health crisis, anti-government sentiment was at an all-time high after seven months of seething and often violent pro-democracy protests.

The perceived slow response — and failure to stockpile enough masks despite the city’s previous experience with SARS — has only added to public anger.

And the outbreak is also changing daily life in more mundane ways.

With schools closed, children are cooped up in a city of notoriously small apartments. Teachers are trying to roll out online classes, playgrounds are empty.

University students already had months of classes disrupted by the protests. Final-year students now fret about whether they’ll even graduate.

Many Hong Kongers are avoiding the office and working from home.

While the streets are far from deserted, they are eerily quiet in a city where a casual walk to the shops can often feel like a rugby match.

For those that venture out, the pavements are uncharacteristically walkable, the subway commute refreshingly quiet and the traffic jams unusually absent. 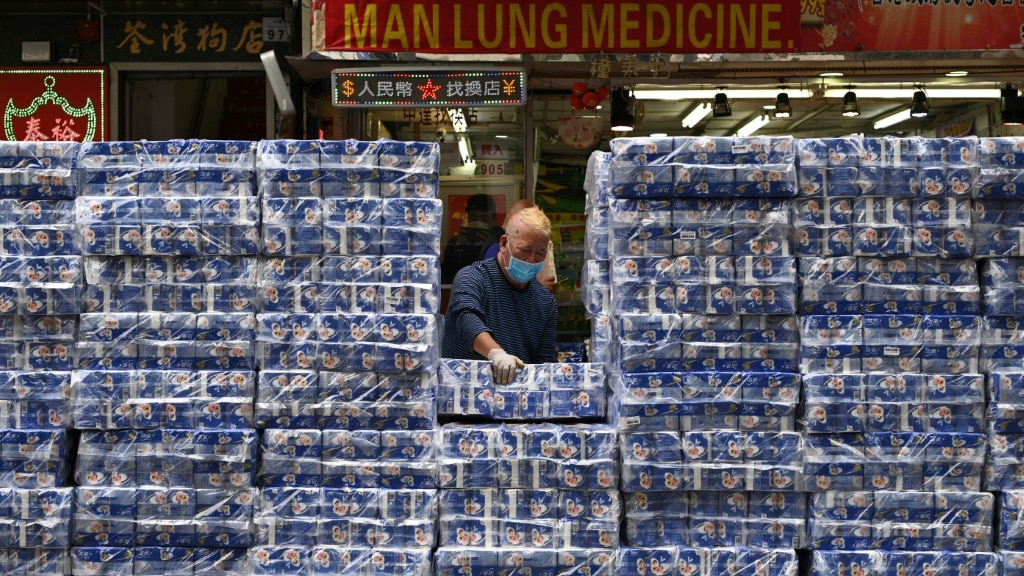 False rumors have sparked panic-buying of tissue in Hong Kong

But for business owners — especially those in the tourist and entertainment sectors — the virus has only compounded their woes after the political unrest.

Ila Ng has owned a bar in Lan Kwai Fong, the city’s most famous nightclub street, for 15 years.

“It’s like a ghost town, it’s really depressing,” she told AFP, with takings since the outbreak down 50 percent.

In the last few months, she has laid off three part-time staff and cut four live music nights to just one.

Only a sympathetic landlord and a host of regular customers have kept her bar afloat.

“We’re just hoping by summer it (the virus) will be contained,” she said.