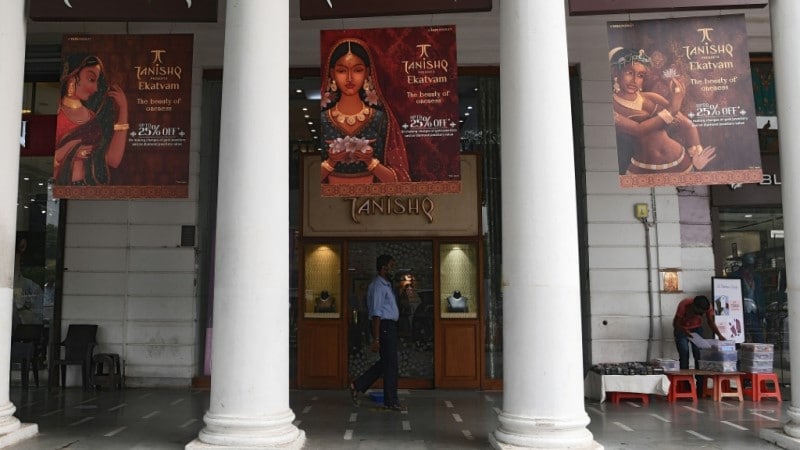 A man walks past a Tanishq jewelry showroom in New Delhi. The company has withdrawn an advert featuring an interfaith baby shower after a backlash by Hindu conservatives

One of India’s top jewellery retailers has withdrawn an advert featuring an interfaith baby shower after a vicious backlash on social media by Hindu hardliners who said it glorified “love jihad”.

Critics of the withdrawal said it exemplified the atmosphere of religious intolerance towards minorities that has grown since Hindu nationalist Prime Minister Narendra Modi came to power six years ago.

The advert by Tanishq — owned by the giant Tata Group — showed a Muslim family organizing a traditional baby shower for their Hindu daughter-in-law.

Tata’s owners are from the Parsi minority who follow the Zoroastrian religion.

Tanishq said the idea behind the “Ekatvam” (unity and oneness) collection was to “celebrate the coming together of people from different walks of life”.

“We are deeply saddened with the inadvertent stirring of emotions and withdraw this film keeping in mind the hurt sentiments and well being of our employees, partners and store staff,” a statement said late Tuesday.

The NDTV channel reported Wednesday that a Tanishq store was attacked in Modi’s home state of Gujarat and the manager forced to write an apology note.

The local mayor later denied the report, although he said police patrols near the outlet were increased.

Despite the advert’s withdrawal, #BoycottTanishq was trending on Twitter, with one user saying it was meant to showcase the “love jihad collection”.

“Majority of your costumers are Hindu and u are hurting their sentiments. Shame on you,” wrote another user.

“Love jihad” is a recent term coined by Hindu extremists to accuse Muslim men of seducing Hindu women and making them convert — a flashpoint issue in the officially secular country.

Those who cross the boundaries of caste and religion are often ostracised and sometimes killed, ostensibly to preserve family honor.

As has been the case in other similar episodes, by Wednesday no senior member of Modi’s government had commented.

“Top leaders (of the ruling party) never come out and condemn these hate campaigns. Because they are totally silent, they seem to be condoning such behavior,” said political analyst Parsa Venkateshwar Rao.

“This creates an atmosphere of hatred all over,” he told AFP.