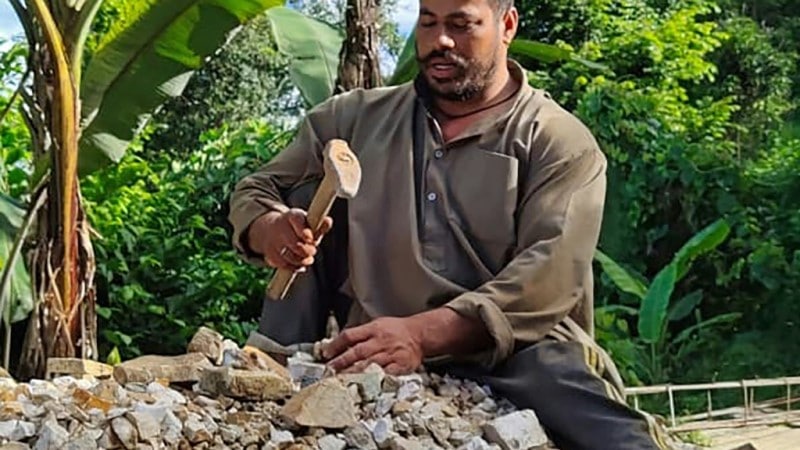 Rajendra Singh Dhami, who was paralysed in the lower half of his body at the age of two, was forced to find new work after India went into lockdown

A player for India’s national wheelchair cricket team has been forced into work as a manual labourer as millions across the country are left jobless by the coronavirus pandemic.

Rajendra Singh Dhami previously earned a living from prize money and sponsorship, supplemented by income from working as a coach, despite wheelchair cricket not being a professional game in India.

But he and millions of others in the South Asian nation were forced to give up their livelihoods and return to their home villages when the country’s cities went into lockdown.

Under pressure to provide for his elderly parents and siblings, Dhami resorted to a job breaking rocks under a government scheme in his hometown of Raikot in northern Uttarakhand state that promises at least 100 days of manual labor a year.

After his plight became national news, the Indian Olympic Association stepped in with a grant of 50,000 rupees ($670), while the state government awarded the struggling player the equivalent of $270.

“I was about to fly out to Bangalore in March with a team that I was coaching but the lockdown happened and everything came to a halt,” the 34-year-old told AFP.

“After a while it became difficult to manage things and I had to fall back to manual labor. I am breaking rocks and earn 400 rupees (about $5) per day.”

Dhami was left paralyzed in the lower half of his body at the age of two but never let it stop him enjoying sports.

He first won medals at the national level in shotput and discus before the prolific all-rounder with impressive batting skills switched to cricket.

Despite rising to the heights of national competition, Dhami said he has never been ashamed to work hard off the field.

“You have to earn to get two meals a day. It would not have been nice to beg and I believe there is nothing wrong in doing anything that involves hard work,” he said.

But he added that the government should do more to help others left without work by the pandemic.

“I have received help, but the heads of our state should realize that it’s not only me but a lot of other sportspersons who are struggling to make ends meet.”