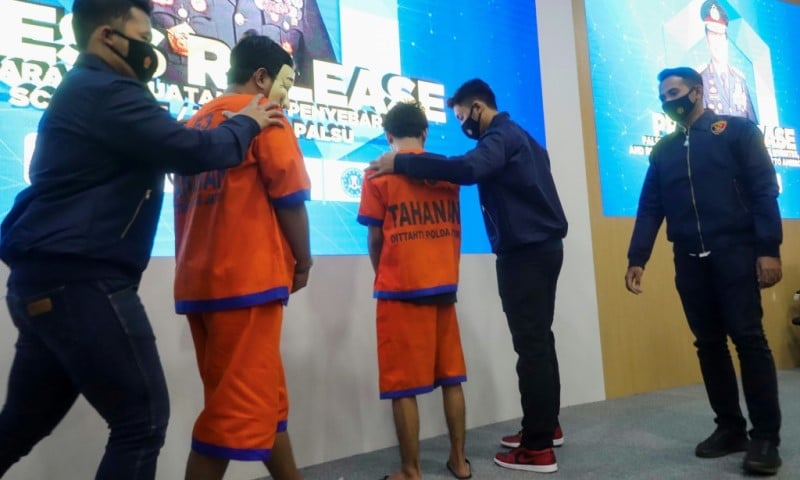 Police parade two hackers arrested over an international scam that saw the theft of about $60 million in Covid-19 aid, in Surabaya, Indonesia

Two Indonesian hackers have been arrested over an international scam in which $60 million was stolen from a Covid-19 aid program helping Americans left jobless by the pandemic, authorities said.

Text messages were sent to 20 million Americans directing them to more than a dozen fake US government websites, police in the Southeast Asian nation said late Thursday.

Thousands of victims supplied personal information, including social security numbers, to the fake sites in the hopes of securing $2,000 offered under a real assistance program for the unemployed, authorities said.

But their data was instead used by scammers to steal millions of dollars from the programme.

“Some 30,000 US citizens were scammed and the government’s financial loss is up to $60 million,” said East Java police chief Nico Afinta.

The two suspects were arrested last month in Indonesia’s second-biggest city Surabaya after police were notified by US authorities.

Indonesian police did not say how long the scam had been running.

The pair could face up to nine years in prison under Indonesia’s electronic information law.

Police said they were investigating the possible involvement of a third person who may have secured funds illicitly.