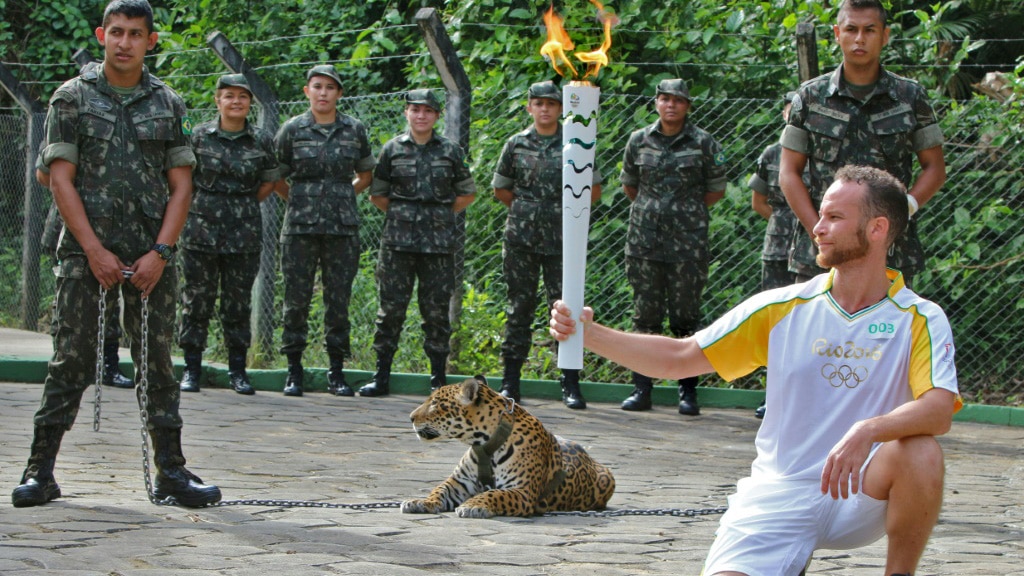 From a jaguar on the loose to an elaborate hoax involving burning underwear, the Olympic torch relay has had its fair share of mishaps.

As Japan postpones the 2020 relay after the Games were delayed over the new coronavirus, AFP looks back at some of the trials and tribulations of the event, first run ahead of the Berlin Olympics in 1936.

Probably the most memorable stunt surrounding the torch relay came in 1956 when an Australian student named Barry Larkin fooled crowds with a homemade torch topped by burning underpants.

Larkin managed to get his torch — a wooden chair leg crowned with a metal pudding container holding the fiery underwear — up the stairs of Sydney’s Town Hall and deliver it to city mayor Pat Hills, cheered on by tens of thousands.

The university student even arranged his own fake motorcycle escort but when he started to run out from the crowd, he found himself flanked by genuine police outriders as the crowd closed in around him.

The mayor sensed nothing wrong as he took the flame from Larkin, giving the first part of his prepared remarks before realizing something was amiss. 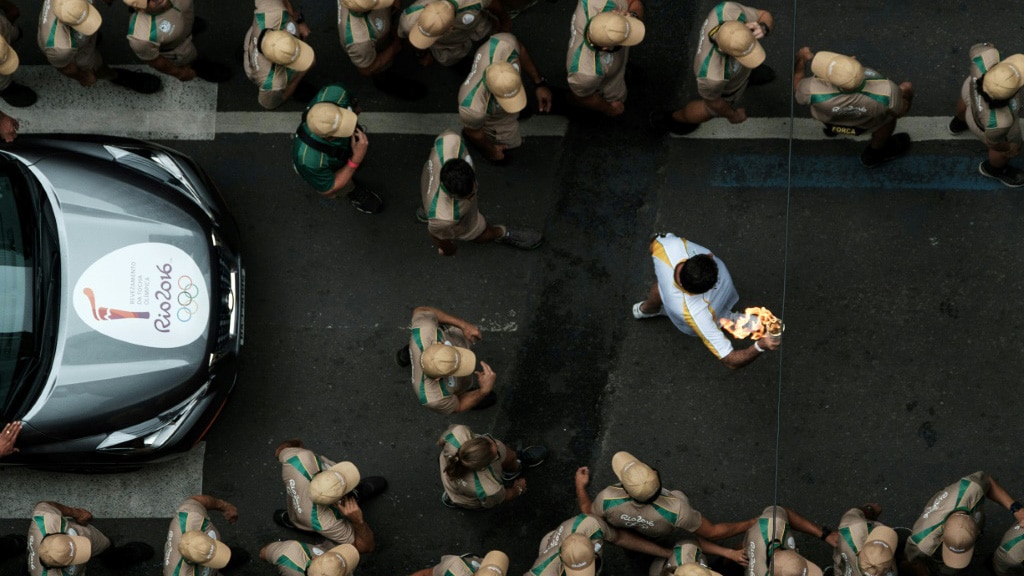 The torch relay for Rio was accompanied by heavy security

Jaguar on the Run

A 17-year-old jaguar named Juma was lined up for photos as the torch passed through the Amazon in northern Brazil during the relay for the Rio Olympics in 2016.

But Juma escaped its handlers and four tranquilizer darts fired at the animal failed to slow it down.

After it threatened a vet, soldiers opened fire on the jaguar — in danger of extinction and the symbol of the Amazon — and shot it dead.

The climax of the relay — the lighting of the Olympic cauldron — has provided some unforgettable moments such as Mohammad Ali trembling to light it as he suffered from Parkinson’s disease, and an archer’s blazing arrow in Barcelona.

But things have not always gone smoothly. The most grisly blunder came in Seoul in 1988 when dozens of doves released earlier in the opening ceremony alighted on the cauldron.

When the flame was lit, several of the birds were incinerated, to the horror of watching spectators.

Legendary Australian athlete Cathy Freeman was also left hanging at the Sydney opening ceremony when a platform supposed to rise after the lighting of the flame got stuck for around three minutes.

“We’ve got a slight technical hitch. Nothing that can’t be fixed,” said one reassuring voice in her earpiece. “F—, f—, f—, f—,” screamed another. 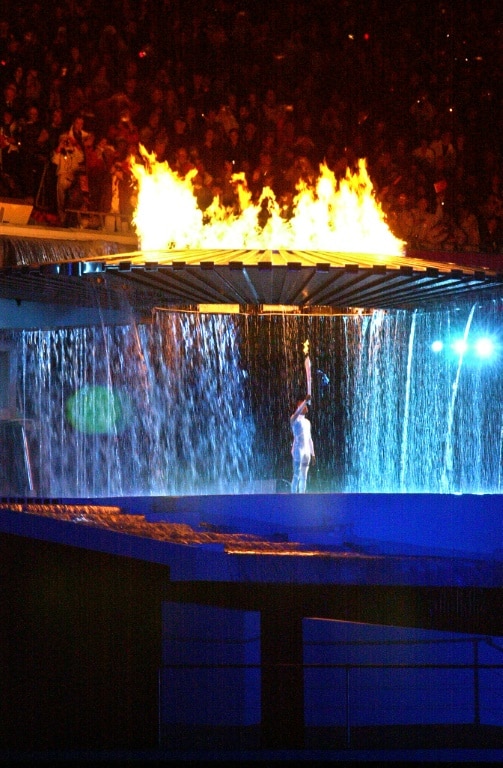 The torch relay has been the target of several protests, most notably during the run-up to the Beijing Olympics as demonstrators took China to task over its Tibet policy.

Protests started even when the flame was lit in ancient Olympia and dogged the relay throughout its journey to China, notably as it passed through London, Paris and San Francisco.

In Japan, monks at an ancient Buddhist temple pulled out of hosting a torch ceremony because of the Chinese crackdown in Tibet.

The relay ahead of Sydney 2000 also suffered from isolated protests. One spectator grabbed it out of the hands of former world surfing champion Tom Carroll as he traveled along the New South Wales south coast and tried to hurl it into Kiama harbor before being wrestled to the ground.

A high-school student also tried to put out the torch with a fire extinguisher. 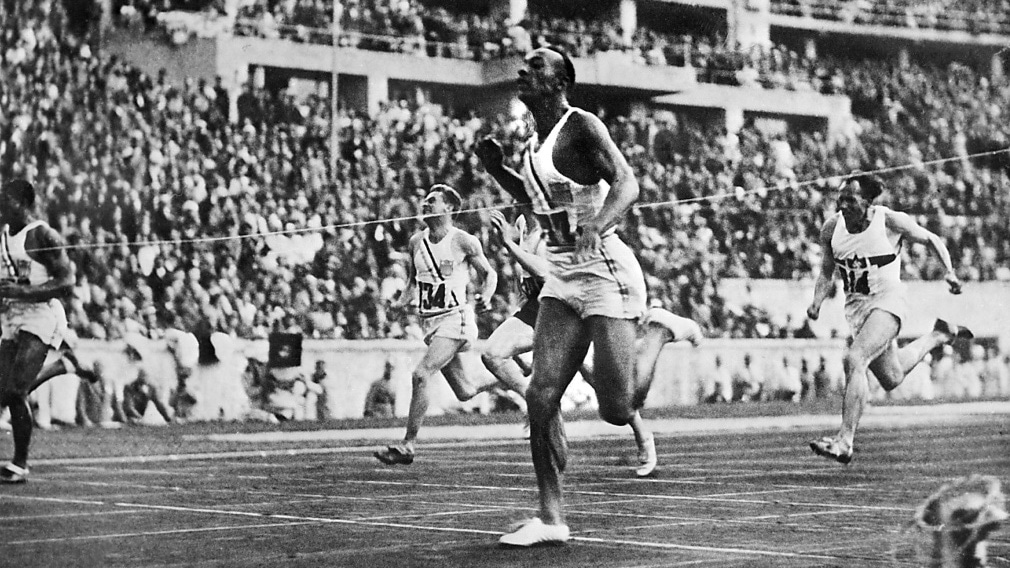 The Berlin 1936 Olympics will always be remembered for Jesse Owens

Although the Olympic flame is supposed to be eternal, problems with the lighting mechanism have caused it to go out several times.

In 2012, officials had to hastily relight the flame from a stand-by “mother flame” when it vanished from the side of Paralympic badminton star David Follett’s wheelchair in blustery weather in southwest England.

Olympic torches made by a Russian missile manufacturer for the Sochi Winter Games in 2014 were dogged with problems, going out several times and having to be discretely relit by secret service officers.

The Olympic torch has been into space, deep underwater and has even scaled Mount Everest.

As the Olympic museum website puts it: “Over the last 80 years, the Olympic torch has been carried by hundreds of thousands of people and traveled on every imaginable form of transport, though mostly by foot.”

The flame made its first appearance in modern times at Amsterdam 1928.

But the first relay took place in Berlin 1936, forever known for the heroics of sprinter Jesse Owens but also tainted by its hosting by Nazi Germany.